28 Animal Jokes and Animal Puns for Kids, Parents, and Teachers

You like puns about animals? Double meanings? Lots of stuff about ducks? This list will not disappoint.

Children love animals more than they love most things. From puppies in the park to cats that live at home or the bunny rabbits that dominate the most beloved storybooks, some of the first words children learn have to do with all sorts of animals. So it’s only logical that animal jokes are a great contender for the first jokes your kid learns.  Like all great corny jokes for kids, the best animal joke probably involves some kind of wordplay, preferably more than one animal pun. And the best animal jokes for kids double down on that pun with a sound-effect based joke, until madness sets in. How many times can you use “quack” to make a joke about a duck? A lot.

Why was the cow afraid?

Why do cows have hooves instead of feet?

What do you call a cow that just had a baby?

What do you call a cow with no legs?

Where do milkshakes come from?

What do you call a sleeping cow?
A bull-dozer.

What do you get if you cross a chicken and a cow?

What do you call a cow spying on another cow?

A cow with no lips.

What do you do if your dog chews a dictionary?

Take the words out of his mouth!

How do you say bye-bye to a curly-haired dog?

What did the dog say when he sat on sandpaper?

Why did the poor dog chase his own tail?

He was trying to make both ends meet!

What happens when it rains cats and dogs?

I don’t know, but you can step in a poodle.

Because they have collar IDs

What dog keeps the best time?

Because they have two left feet! .

What did the horse say when it fell?

I’ve fallen and I can’t giddyup!

What did the teacher say when the horse walked into the class?

Why the long face?

What do you call a horse that lives next door?

How do horses stay in such great shape?

They keep a stable diet.

What does the horse say when the bartender greets him by saying “hey?”

You read my mind!

What kind of computers do horses use?

What kind of jungle cat is no fun to play games with?

Why are cats so good at video games?

Because they have nine lives.

What do you call a cat wearing shoes?

Why can’t a leopard hide?

Why do cats always get their way?


What do you call a cat that’s in trouble with the police?

What kind of sports cars do cats drive?

Why do fish live in saltwater?

Because pepper makes them sneeze!

What do you call a thieving alligator?

What do fish do at football games?

Where do fish sleep?

On a water bed.

Why did the fish blush?

It saw the ocean’s bottom.

What does a fish do in a crisis?

It’s time to scale back.

Where do mice park their boats?

At the hickory dickory dock.

Where did the sheep go on vacation?

What’s black and white and blue?

What did the judge say when the skunk came into his courtroom?

“Odor in the court!”

What day do chickens fear the most?

How do you stop an elephant from charging?

Take away their credit cards.

Who stole the soap out of the bathtub?

What do you get if you cross fireworks with a duck?

What has fangs and webbed feet?

What was the goal of the detective duck?

To quack the case, of course.

What happens when a frog’s car breaks down?

Why did the elephant stay in the airport?

They were waiting for their trunk.

What time does a duck wake up?

At the quack of dawn!

What did the duck say when buying lipstick?

Put it on my bill.

Can a kangaroo jump higher than the empire state building? 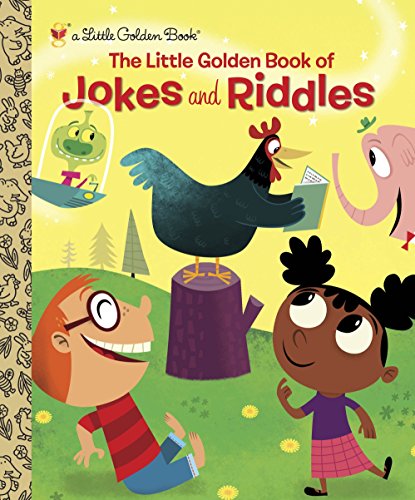 The Little Golden Book of Jokes and Riddles

Editor’s note: All of these corny kid’s joke are in the public domain. However, we did a spot a few of these on Funology.com and in The Little Golden Book of Jokes and Riddles, which honestly, I can’t recommend strongly enough.