Should You Watch ‘Dune’ With Your Kids?

Here's what parents need to know about the latest spicy trip to the planet Arrakis.

The epic sci-fi event of the year is here. Starting Friday, October 22, Dune: Part One will be streaming on HBO Max and playing in theaters in the US.

If you’ve somehow managed to dodge the Dune-hype, know this: it’s the first part of a planned two-part adaptation of the 1965 novel Dune, all about the struggle for power on a desert planet in a distant future. The movie stars Oscar Isaac, Rebecca Ferguson, Timothée Chalamet, Zendaya, Josh Brolin, Javier Bardem, and Jason Momoa, just to name a few. The movie has been delayed for nearly a year, and the prospect of a sequel — Dune: Part Two — is still murky. Still, other than perhaps Spider-Man: No Way Home, Dune is probably the biggest movie of 2021 and has already been favorably compared to Star Wars and Lord of the Rings.

So, with all of those things in mind, should you watch Dune with your kids? Not so fast. Here’s what families need to know about this sci-fi epic, and just exactly what they’re getting into when they wade into the sands of Arrakis. Mild spoilers ahead for the book version of Dune.

The new Dune film — Dune: Part One — directed by Denis Villeneuve is rated PG-13. This is mostly for violence. But that doesn’t mean Dune is like all other PG-13 movies. Some of the violence is pretty disturbing.

Historically, Dune has never been kid-friendly.

In 1984, young kids could get their hands on a Dune coloring book a Dune storybook, a three-issue Marvel comics miniseries, and a smattering of Dune action figures. The movie was directed by David Lynch and featured gut-wrenching scenes of violence and people riding giant worms.

Perhaps the most kid-friendly scene in the 1984 Dune was the part where Gurney Halleck (Patrick Stewart) clutched an adorable pug while wielding a machine gun. Yes, there were kids’ toys for the 1979 horror film Alien, too, but even now, the idea that Lynch’s Dune was a kids’ brand is pretty hilarious. Yes, Dune was rated PG-13 in 1984, and a kid could watch it, but that film is not really appropriate for anyone under the age of 13.

This makes the marketing of Dune somewhat confusing. Just like today, the studio (Warner Bros) invited the Star Wars comparisons and hoped that allowed the film to cast a wide net for its audience. In this sense, very little has changed. The new 2021 Dune is also being marketed as a mainstream action epic in the mold of Star Wars, which makes a certain amount of sense since there’s a desert planet, people with magical powers, and George Lucas really liked the book. But, there is no version of Dune that is as “family-friendly” as Star Wars or Lord of the Rings.

Dune is not for kids. Here’s why.

The new film Dune: Part One features two father figures dying, one who is stripped naked by his enemies before that happens. The other character, who is somewhat heroic, dies in a depressing way, even though it protects the young protagonist. Arguably, these two deaths are nothing new in big sci-fi epics. Revenge of the Sith shows Anakin Skywalker about to kill little kids, while Obi-Wan Kenobi and Han Solo get lightsaber-ed to death in A New Hope and The Force Awakens, respectively. So why are the deaths in Dune any different? Don’t old people sacrifice themselves for the young hero in all these kinds of movies, kind of like Gandalf?

Superficially, that’s true. But Dune isn’t playing for a happy ending. In Lord of the Rings or even the darkest Star Wars movies (Empire, Sith) there’s always a pretty bit shiny light at the end of the tunnel. Dune isn’t like that. Yes, a 10-year-old can certainly probably handle some of the violence (parents, use your own discretion) but the themes of this film are not the happy-go-lucky themes of Star Wars or Tolkien. Toward the end of this movie, Paul Atreides is forced to kill someone he basically likes in order to keep him and his mother safe. The ethics of Dune are not black and white. This is not a good versus evil tale, and the story of Paul Atreides is not the story of Rey, Luke Skywalker, Frodo, or Batman. It’s dark and strange and has multiple messages, some of which contradict each other.

TLDR: Dune is morally complex and visually frightening. It’s a thrilling movie for adults who are interested in an adult science fiction epic, but it’s not designed for family viewing if you have young kids. 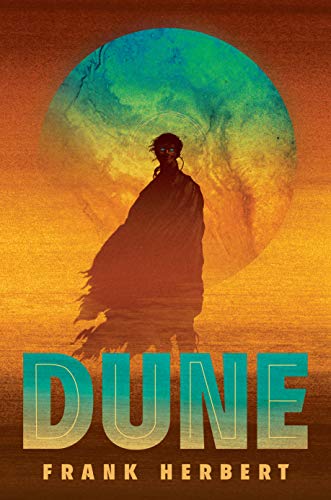 If you family does dig the movie, the Dune book is pretty great.

So, you’re gonna watch Dune with your kids anyway…

Let’s say you still want your 8-year-old to watch Dune with you because you love the books and you want your kid to be introduced to great literature in the form of a huge blockbuster that you can stream on HBO Max. You want to make your kid into a reader, and because Dune: Part One ends on a cliffhanger, you can tell your kid that the rest of the movie exists in the back end of the book. This is true, by the way: the movie covers up until about page 500 in the book. After it ends, you can literally read from page 500 onward, and you’ll get the rest of the story.

Anyway, wanting to get your young reader into Dune isn’t a bad thing. It’s an awesome story full of big ideas that can arguably make your kid into a smarter person. This is all well and good. But, if you’re still gonna let your non-tween child watch Dune, here’s one thing to remember: Imagine a version of Game of Thrones with less nudity and sex. That’s what Dune is. Instead of the dragons, you’ve got the sandworms (though you barely see them.) And instead of Jason Momoa being kind of evil, he’s good.

That said, Dune is not as funny as Star Wars or Game of Thrones. There are few moments of levity, but for the most part, this is a deadly serious movie. If you saw director Denis Villeneuve’s last film — Blade Runner 2049 — you’ll have a good idea of what to expect in tone.

Dune: Part One is a wonderfully intricate movie. If you love the books, you’ll find yourself punching the air in approval. Just keep in mind not every real child is Paul Atreides. They might not be ready for the realness of this sci-fi world. At least, not yet.