Ron and Clint Howard Say Their Dad Protected Their Childhoods

The famous brothers have a new memoir, which Ron says is really "a parenting book."

Growing up in Hollywood could have gone very wrong for Ron and Clint Howard. But, as the famous brothers have recently revealed, their father, the late Rance Howard, was instrumental in making sure they both had real childhoods. For parents who think they may have a budding actor or performer on their hands, the recollections of the Howard boys are revealing, and fascinating. Recently, Fatherly caught up with both Ron Howard and Clint Howard over Zoom to discuss their best-selling book The Boys: A Memoir of Family and Hollywood.

Here’s what Ron and Clint had to say about conflicting memories, being kids in the public eye, and what they think parents can learn from their life stories.

Ron Howard and Clint Howard’s careers are well known. They started as child actors — Ron appearing famously as Opie in The Andy Griffith Show, while Clint Howard appeared in the shows like The Streets of San Francisco, Night Gallery, and somewhat famously, as an alien with the body of a child in the Star Trek episode, “The Cormobite Maneuver,” the first regular episode of Trek ever filmed, after its first two pilot episodes. Clint says he remembers working with William Shatner, but only vaguely. “I was only six years old.”  As adults, both Howards have flourished. Most are familiar with Ron’s work as a director, something that, over the years has paired him with Clint. For example, in the Ron Howard-directed films Apollo 13 and Solo, Clint has roles. The brothers are very different men, and when you speak to them, that becomes abundantly clear. And yet, they decided to write a memoir together, rather than apart. Why?

Clint Howard said it all came about partially because their father, Rance, passed away in 2017. “After Dad died, we were orphans,” Clint explains. “I don’t do dying parents very well. I mean, I didn’t, I didn’t freak out or anything, but I just, I went numb and I don’t believe I really grieved properly. And when that was happening, boy it felt good to see my big brother…[writing the book] with Ron felt like a good way to honor our parents.” 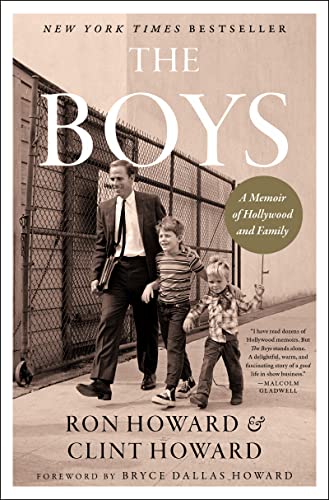 The Boys: A Memoir of Hollywood and Family

The Boys by Ron and Clint Howard

“The book was a good way to honor or parents,” Clint Howard says.

The elder Howard, Ron agrees. And despite his prolific nature as a writer, producer, and director, says he needed his brother to get to the finish line on this book.

“I would never finish the project if I didn’t have a deadline and the impetus of engaging with Clint,” he says with a laugh. “It’s a unique memoir because it’s the story of our parents [Rance and Jean Howard] but we also thought it could entertain and engage people very broadly. If you care about nostalgia, we have that to share.”

Both Howard brothers are also adamant that this book is not some kind of work of time travel journalism. They are dealing with their own memories of how things happened, and sometimes, while working on the book, those memories conflicted.

“You know, I had a different perspective than Ron,” Clint Howard explains. “Ron’s brain is five years older than mine. He was more mature during some of this stuff. So, yeah, in the book, you’ll see that a couple of times our memories don’t match up. But, I think both of us have our mom’s gift of gab.”

Ron Howard says that the idea that certain memories conflict was built into the project and is something that is one of the book’s strengths, rather than weaknesses. “Part of the design of the book was, to facilitate those differences and even benefit from them. When there are discrepancies, we generally we moved them up front and center and, um, and, and made a moment out of it in the book.”

“Our dad stood for something that people could recongize as integrity,” Ron Howard says.

That said, both Howards agree on one thing: Their father Rance “protected” them from growing up too quickly. To illustrate this point, Ron Howard recalls a moment when, on the set of a TV show, various cast and crew members were using adult language, that was utterly inappropriate for the child actor, who was also hanging out. And in this story, the larger point of the memoir is made clear: Ron and Clint’s parents, and their dad in specific, protected their childhoods.

“I vividly remember an instance where some crew members were joking around the language was getting kind of blue, and they were sort of including me, because like 10,” Ron Howard says. “I wasn’t a toddler. But, I remember Dad saying ‘Fellas. Ron is 10 years old. This is not the locker room.’ He literally shut that down. He wasn’t a tough guy, but he stood for something that people could recognize as integrity. And we benefited from that.”

For many parents, the idea that their children may find themselves in the world of the performing arts is a double-edged sword. Recognizing a child’s gifts is one thing, but show business is tricky. “We just felt like that, you know, so many people wanted to know and about his tips about dealing with child actors,” Clint Howard says. “Which is part of why we did this.”

“If you have any interest in allwoing your children to be in show business, this book can help.” Ron Howard says.

For Ron Howard, The Boys isn’t just a recollection about the Howard family itself, but he says “It’s almost a parenting book, too. If you have any interest in allowing your children to be in show business, I think this book can help you and your children learn about how to excel on at an elevated level. We were at a highly competitive level. And without our parents, we wouldn’t have made it.”

The Boys is out at all major booksellers and you can buy it here.