Is the Fisher-Price My Home Office the World’s Most Soul-Crushing Toy?

Or is it a tool for healthy imaginative play? Two Fatherly editors slug it out.

When it was released in August, Fisher-Price’s My Home Office play set elicited strong reactions. So many of us are working from home now, while so many of our kids see us doing so, for better or worse. Do they want to help press the buttons on the computer and see the Zoom people? Yes. Do they also start to emulate stressed-out slouching and to associate work with frustration? Also yes. The wall between our work lives and family lives has been torn down, and Fisher Price has a toy to commemorate the event.

For many, My Home Office is just a little too real: Having our lives reflected back to us by kids using pretend devices and tasks may be…unsettling. Aimed at preschoolers, the eight-piece set includes a laptop with four fabric “apps” that attach to the screen, so Pams and Jims can tackle different projects. There’s a pretend smartphone, because of course there is, and a headset that “lets kids take all their important business calls,” while slugging back coffee.

Now, so-called real-world toys like this do serve a purpose: They help kids make sense of what they see adults around them doing, by engaging in similar behavior. Think play kitchens, pretend tools, or that old comb that a 3-year-old makes into a phone.

The question is: Does the My Home Office set represent the cynical sacrifice of childhood magic in favor of corporate striving? Or is it, rather, another way for children to gain insight into the lives of their parents, a tool for practicing being humans in the world? Fatherly’s parenting editor Patrick Coleman and gear editor Donna Freydkin slug it out. 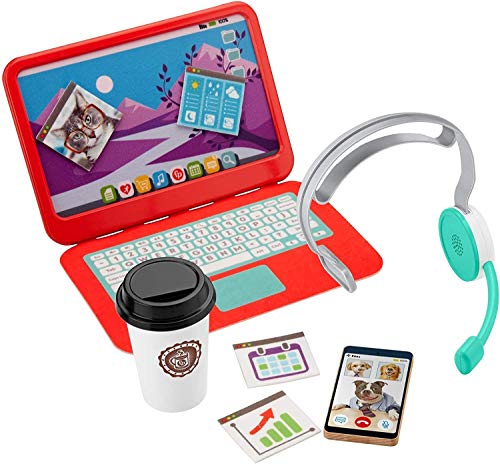 The home office kit in question, which retailers can't keep in stock.

Donna Freydkin: Dearest Patrick: You’re a great dad. You’re an insightful and smart parenting expert. You’re a great happy hour partner. You, however, suffer from a serious lapse in good taste. That can be the only possible reason you think the WFH play set is a good thing for kids.

Being on calls all day, while drinking coffee and pecking away at a keyboard, is called working. It’s not playful or imaginary or anything I want my kid to do “for fun.” It’s what we do because we need to pay for stuff like groceries and Netflix and my secret addiction to La Ligne sweaters. If our kids are lucky, they’ll get paid to do what they love, but let’s be honest: Most of them will work merely to pay the bills. That’s a lesson they can learn down the line. Way, way down the line.

Patrick Coleman: Thank you for the compliments, Donna! And in terms of aesthetic taste, I think you’re spot on, which is what I’d expect from someone as classy and thoughtful as you. But you are not a 3-year-old. Three-year-olds are notoriously uncultured when it comes to play things — consider the key ring or the broken calculator. And, yes, as adults we see this laptop/headset combo and think “ugh, work,” but a kid sees us using this stuff and thinks, “I want to touch those things!” That’s kind of the point of a 3-year-old: exploration. That’s why I’m not calling foul on the WFH play set.

PC: For a kid, another F-word comes to mind. Fun!

DF: So bickering over budgets and schedules while yelling into a headset, while pounding away at a keyboard, while knocking back stale java, is fun? I understand that kids make sense of the adult world by mimicking their parents and caregivers. I get pretend play. I’d just rather they pretend to be astronauts or unicorns or narwhals or fucking Elsa. Being tethered to a keyboard is not the way I want kids to do it.

Playing with a laptop, headset, and to-go coffee cup doesn’t need to be the drudgery it is for you. Why? Because you aren’t sending Slack messages to unicorns.

PC: I’m not suggesting every kid should have this toy. But if kids are seeing parents work like this and are interested in trying on the role, I think the set is innocuous. Besides, I think there’s an opportunity in this toy. If anything, parents might be reminded of the roles that they are presenting and start to moderate or reinforce their own boundaries around work and home. There’s nothing like a mini-me hollering into a headset about TPS reports to give one a moment of clarity.

DF: Remember when Dwight Schrute got schooled on The Office by having his prized stapler encased in Jell-O? That’s a kid prank I can get behind. That’s weird and playful and interesting. Typing away at a plastic laptop, while mumbling into a headset, just seems soul-deadening to me. Mostly, it’s because our kids will have their whole lives to learn about the dubious joys of work, of what it means to be tethered to a job that gets tiresome and all-consuming. Must they figure it out before they’re even in pre-K?

PC: No. Obviously childhood should be a damn good time. And playing with a laptop, headset, and to-go coffee cup doesn’t need to be the drudgery it is for you. Why? Because you aren’t sending Slack messages to unicorns. You aren’t working with Elsa to make sure the ice elves have enough syrup for their sno-cones (is that the plot of Frozen? I literally never paid attention). But kids? Their imagination is tuned to have these kinds of “work” interactions. Will they be crushed when they grow up to find that the only trolls you can talk to on a laptop have neckbeards and live in their parents’ basement? Maybe. But believe me: The public education system will attune them to tiresome drudgery long before they ever consider employment. So, why not let them play? What is the difference between this toy and that pull along telephone with he swivel eyes from back in the day?

DF: Well, Patrick, I know when to retreat to my cubicle (wait, what are those again?). And clearly, since this thing sold out everywhere right after it launched, maybe I dialed into the wrong Zoom meeting. I see your point. A toy is just a vessel, and it’s imagination that turns it into something special. I just hope that something special isn’t a Bluetooth headset.

PC: Don’t get me wrong, I totally understand your disgust. From a less-than-oblique angle this toy pretty much looks like late-stage capitalism planting the next crop of proletariate suckers. That said, I believe a child’s imagination is far more powerful than the rotting foundations of corporate America. Besides, we’d be naive to think our kids will be using Bluetooth by the time they are employable. It’s far more likely that Elon Musk will have found a way to suck content straight from their brains via an ad-supported nueral interface. Just imagine the kind of toys they’ll make for that!

Kids Toys Pretend Play
ADVERTISEMENT
ADVERTISEMENT
More From Gear
Gear These 3-D Rugs Look Like Full-On Worlds
Gear This Dyson Toy Vacuum Won’t Clean Your Carpet, But It Will Entertain Your Kids
Gear These Gorgeous Teepee Tents Belong In Your Playroom
Gear Protected: The Best Of The Backyard: The Home Depot Edition
Gear The 5 Best Smartwatches for Kids Who Aren’t Ready for a Phone
Gear The Most Valuable Lego Sets & Minifigures Ever Released