These crates and baskets will save your sanity.

Toy storage becomes a major issue when you have kids. And thus, you need serious toy storage ideas before your home turns into a warehouse of discarded Legos and dolls.

Even if you’ve managed to successfully Marie Kondo your kids’ stuff (which as many of us know can be tricky with youngsters around), you’re still going to need to find some toy storage for the items that do spark joy. To keep the Lego sets, trains, dolls and unicorns out of each other’s way, we’ve rounded up a variety of affordable Amazon options for toy organizers, shelves and bins, each one costing less than $100. As for convincing your kids to actually put their damn stuff away? Unfortunately you’re on your own for that.

Remember that larger pieces need to be safely secured to the wall to avoid tipping; if your furniture doesn’t come with any, you can buy your own anti-tip kit and install it yourself, or hire a pro to handle it. 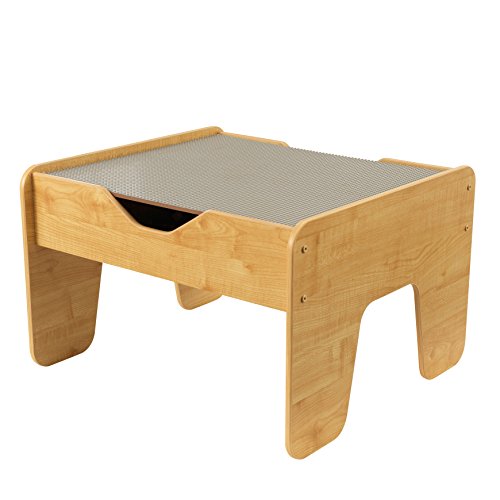 KidKraft 2-in-1 Activity Table with Board

This handy table, which measures just under two feet high, is a staple at preschools and daycares. There's a roomy storage area under the two-sided play surface (one side has an illustrated scene that's great for trains and cars, the other has a building surface for bricks like LEGOS).

Pros: It’s well-priced for such a sturdy piece of furniture, and there’s also plenty of room between the table and the floor to stash larger toy bins. It also comes with 200 “LEGO compatible” bricks.

Cons: Parents said that although most actual LEGO pieces fit on the boards, not all did. You’ll also likely want to add some shallow bins to better organize the storage area. 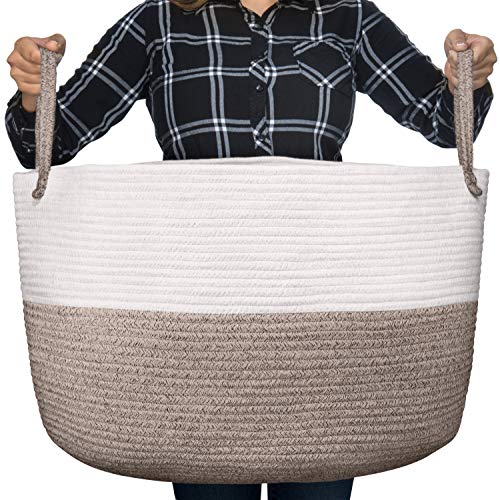 We have this basket. We are obsessed with this basket. It’s roomy. It’s deep. And it looks way more expensive than it is.

Pros: You can use this storage basket to house games, stuffed animals, puzzles, and discarded clothing. It’s aesthetically pleasing and easily segues to your living room, if needed. At 22 x 22 inches, it’s the perfect size.

Cons: It does sometimes lose its shape when it’s not full enough. 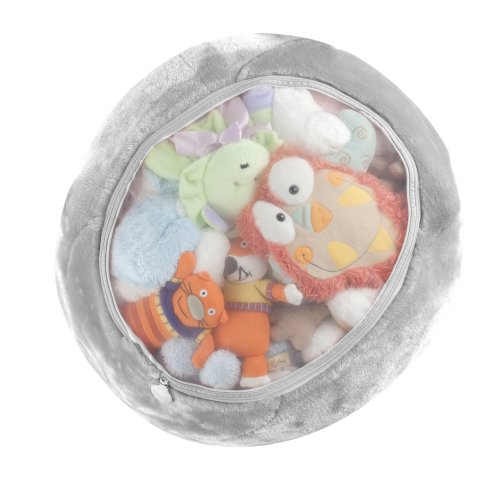 If you're drowning in stuffed animals, stuff them into this handy storage bag.

Pros: This stuffed animal storage bag not only gets them out of the way, but it doubles as a seat.

Cons: It’s on the smaller side, so if you have a ton of stuffies, get something bigger. 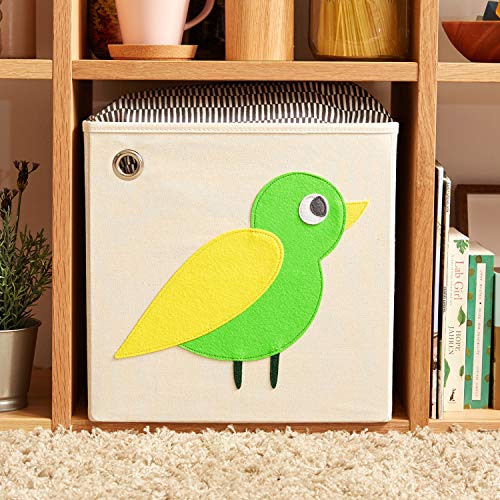 These adorable 13-inch square bins measured can be used in a mix of different shelving units.

Pros: They’re sturdy but lightweight, and there are many different styles and designs, whether your kid is into pandas, lollipops or outer space.

Cons: The bins start around $15 (some cost even more), which is a lot to shell out if you’re trying to fill a large shelving unit. It's a shelving unit with a Tetris vibe: The cubes can be rearranged in a variety of configurations depending on your space.

Pros: Assembly is a breeze (for most people), and the rust-proof metal is easy to clean. Anti-tip hardware is also included. Since it doesn’t look babyish, you can give this piece a new spot in your home if you decide to stop using it for toys.

Cons: Some reviewers found that plastic connector pieces broke during assembly (the company does include a few extra ones), and that the unit seemed small once it was put together. 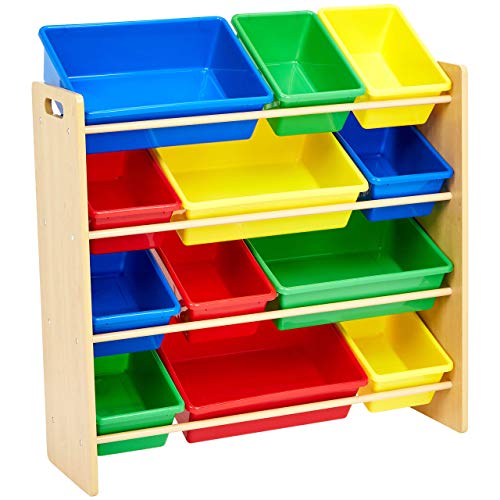 This all-in-one shelving unit, which measures roughly 2 ½ feet wide by 2 ½ feet high, has an array of colorful bins (sold in either primary colors or pastels). It also comes with mounting hardware so it can be secured to a wall and prevent tipping.

Pros: The bins make it easy for kids to see what they’ve got and (ideally) put their stuff back when finished. Parents also loved that assembly was fairly easy and straightforward.

Cons: A few parents wished the bins were larger—because of the angle, they can’t be filled to the top. There were several reports of bins arriving cracked. 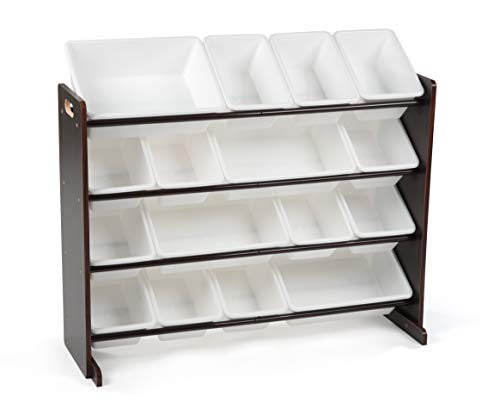 Measuring 3 ½ feet wide with 16 storage bins, this oversize organizer can corral all. The. Stuff. It's sold in four different finishes (espresso, natural wood, white and gray), but the bins are always white

Pros: Many parents found it easy to put together (an electric screwdriver helps things go more quickly) and attractive enough to use even in a living room or family room.

Cons: There were many comments about missing hardware, and some reviewers said they received furniture that had already been opened and was damaged. 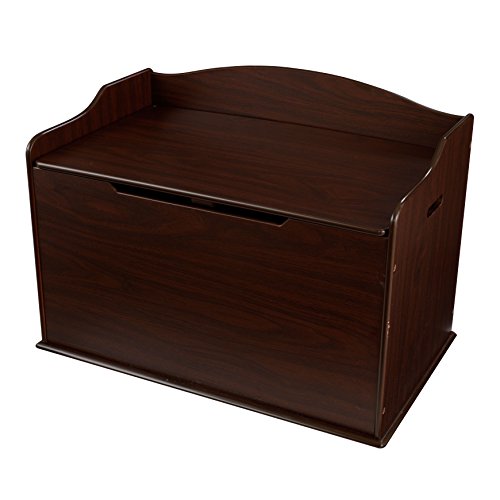 You might have had a toy box like this when you were a wee one. It comes in seven different finishes, including espresso, cherry red and navy blue.

Pros: It’s got classic good looks, doubles as a bench (some parents add cushions) and has safety hinges to keep the lid open and prevent smashed fingers.

Cons: It’s pricey, and this type of storage can quickly become a black hole for toys (although it would work well for larger, bulkier items like stuffed animals or balls). 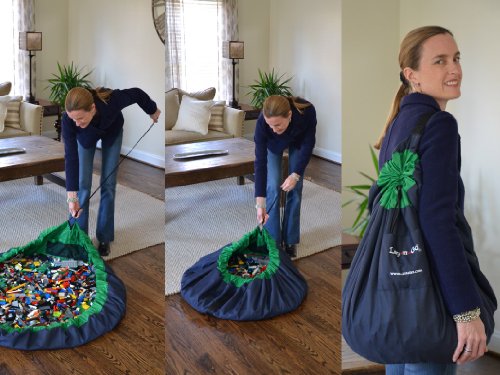 This is an activity mat that converts into a transportable shoulder satchel that kids can fill with Legos and other small toys.

Pros: The ideal system for parents that have kids into small items that are always under foot, this large mat acts as a play area and storage system at the same time. Expand it and you have a designated play area with boundaries; when playtime is over you can cinch it shut in seconds, and either dump out the contents and hang it up, or toss the full bag in a corner until the next time.

Cons: The drawstring isn’t quite as durable as some had hoped.

Oops! Something went wrong. Please contact support@fatherly.com.
Thank you for subscribing
Give us a little more information and we'll give you a lot more relevant content
Your child's birthday or due date
Add A Child
Remove A Child
I don't have kids
Thanks For Subscribing!
Oops! Something went wrong. Please contact support@fatherly.com.
Commerce Organization toy room toy storage
ADVERTISEMENT
ADVERTISEMENT
More From Gear
Toys ToyFair 2020: 10 Takeaways About the Current State of Toys
Toys Tesla Cybertruck Hot Wheels: How it Went From Stage to Scale Model
Toys The Best Toys From Toy Fair 2020: Bricks, Scooters, and Real Construction Equipment
Toys The Giggling, Blinking Baby Yoda Toy of Your Dreams is (Almost) Available
Outdoors How to Build the Best Bug-Out Bag, Emergency Kit, or Go-Bag For Your Family
Home Dyson's Newest $750 Air Purifier Actually Destroys Formaldehyde