Parents Can Now Create Their Own ‘Winnie the Pooh’ Story, Legally

Now, everyone owns a piece of Pooh.

Amateur writers, filmmakers, and artists have depicted and quoted Winnie the Pooh and friends for decades, but it’s all been under the radar and quite illegal. That’s because the Walt Disney Company owned the rights to the books and characters created by A.A. Milne and illustrated by Ernest H. Shepard. But that’s all about to change, as the copyright expired when our clocks ticked from December 31 to January 1, meaning Pooh and most of his pals are now in the public domain. And here’s why that matters like so much honey in a pot: once a property enters the public domain, it can be shared, reused, performed, written about, sampled, or repurposed with no accompanying cost incurred or permission granted from an author’s estate.

So, Dad, if you want to dress your kids up as Pooh and Eeyore for a homemade Pooh adventure you shoot on your iPhone, have at it. If you want to write about the teddy bear’s next big picnic or heart-to-heart and self-publish the results, now’s the time. But there’s a catch. Make that catches. For example, you’ll need to steer clear of Tigger. Why? The U.S. copyright law that put Winnie-the-Pooh in the public domain dates to 1926, and Tigger didn’t meet Pooh — or the world — until 1928 when Milne published The House at Pooh Corner. Piglet, Eeyore, Owl, Rabbit, Kanga, and Roo, however, are all fair game because they first appeared in 1926, in the original short stories that made up the first book. Complicating matters, anyone can now create their own works based on the E.H. Shepard’s line drawings, but the Disney versions of any Pooh characters are off-limits. Basically, Disney has lost their exclusivity to the character.

Winnie-the-Pooh is the marquee title entering the public domain. But check out some of the other properties doing so as well: Ernest Hemingway’s first novel, The Sun Also Rises; Dorothy Parker’s debut collection of poetry, Enough Rope; The Weary Blues by Langston Hughes; and The Murder of Roger Ackroyd by Agatha Christie. Among the films – silent films – are The Son of the Sheik, Rudolph Valentino’s last movie; Battling Butler, from the great Buster Keaton, and The Temptress, starring Greta Garbo. Also, for the first time ever, upwards of 400,000 sound recordings are entering the public domain. That encompasses classical music, ragtime, early jazz and blues, opera, ragtime, vaudeville, (then)-popular songs, ragtime, and even comedy sketches, by the likes of Enrico Caruso, Ethel Waters, Fanny Brice, and Al Jolson.

One more intriguing title entered into the public domain on January 1. It’s another property most people associate with Disney, not even realizing it’s derived from a book. That would be Bambi, a Life in the Woods, written by the Austro-Hungarian author Felix Salton and published in 1923. The book — with its graphic descriptions of hunting and reputation as a parable of the persecution of Jews in Europe — was completely reimagined for the Disney animated classic released in 1942.

But back to Pooh. If Winnie-the-Pooh’s entry into the public domain has anyone rumbly in the tumbly to revisit Pooh, Christopher Robin, and their friends, several other books are worth checking out. (We think The House at Pooh Corner has the best ending of a book, ever.) 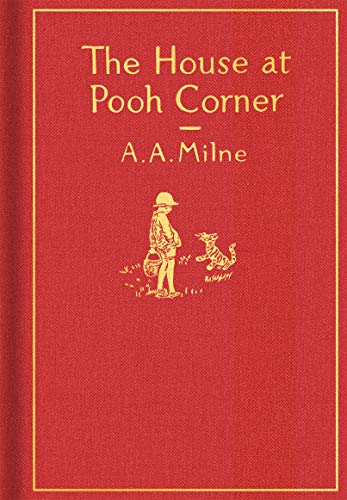 The Houes at Pooh Corner

In addition to Winnie-the-Pooh and The House at Pooh Corner, the pot-bellied bear makes his debut, in a cameo, in When We Were Very Young (1924), and he returned in Now We Are Six. Both titles are poetry collections. Milne passed away in 1956, but Pooh sought honey again in Return to the Hundred Acre Wood (written by David Benedictus, illustrated by Mark Burgess), published in 2009, and The Best Bear in All The World (written by Paul Bright, Jeanne Willis, Kate Saunders and Brian Sibley, illustrated by Mark Burgess), published in 2016.

Winnie the Pooh
ADVERTISEMENT
ADVERTISEMENT
More From Play
Play ‘The House at Pooh Corner’ Has the Best Ending of a Novel, Ever
Play 15 Winnie-the-Pooh Quotes Parents Should Revisit
Play The Teaser Trailer for ‘Christopher Robin’ Is More Creepy Than Cute
Play You Only Think You Know Winnie-the-Pooh’s Origin Story
Play Is ‘Christopher Robin’ Actually an Okay Movie For Kids?