The biggest doom metal fan in your house is probably the 4-year-old.

A 4-year-old is, at once, wonderful and frightening, like the great rock bands of history. People warn you about the terrible twos, the wild emotion, but the fearsome fours come out of nowhere and can scare the shit out of you. Nothing prepares you for the wily supervillain in training suddenly in your home or the dark schemes they’ve concocted. Suddenly all those major fourths laid gently over lilting rhythms are not enough and your little iconoclast demands art that challenges. A preschooler doesn’t want to be soothed. They want Black Sabbath.

Hear me out. Sure, they were infamous for their hard partying, fixation on evil, and the responsibility for introducing a very specific form of doom and gloom to popular music. They also, famously, rock. Quite hard. I’d like to suggest that this is the fundamental thing: a psychic nutrient your preschooler desperately needs and almost certainly the first thing they’ll notice about the band that became synonymous with heavy metal.

Listen, if you’re the kind of person who thinks singing about Satan is a dealbreaker for your children’s music, I’m probably not going to convince you. Ditto on witchcraft, or cults, or the passing mention of corpses. Honestly, if your four-year-old can understand what the fuck Ozzy is moaning about most of the time they’re more astute than a million Hessians who came before, which is entirely possible. In that case, you might want to steer them towards something more lyrically driven (the Bad Seeds perhaps?) but not before they sit down and acknowledge the kind of raw perfection that doesn’t really need more words than Baby Shark.

Personally, I’m of the opinion that the Devil casually mentioned on Black Sabattah’s 1970 debut album (Black Sabbath) is about as dangerous to your kids as the dreaded tritone. That specific interval of six semitones found only once in each major key but found splattered all over that album was, according to legend, banned by the Church in the Middle Ages. The history of the Devil’s Interval is a little more nuanced in reality but the print-the-myth approach has always served Sabbath well, as has that particular shank of dissonance. It’s more intrinsic to Black Sabbath than the Hammer Horror films and just as much firmly roots them in the Western Canon’s version of spooky.

Which makes sense coming from four upstanding Christian lads from Birmingham. The band supposedly wrote their first album’s signature riff – the eponymous opener of Black Sabbath – on Gustav Holt’s Mars theme from The Planets. That movement of the suite, with its defiant thumping and snarly wrath, remains hugely influential on all things plodding and ominous. You can hear its echo in dozens of film scores including those by John Williams and Hans Zimmer, the music that runs behind scenes of war or acts of violence or the coming terror that cannot be circumvented. See! This album is already educational! 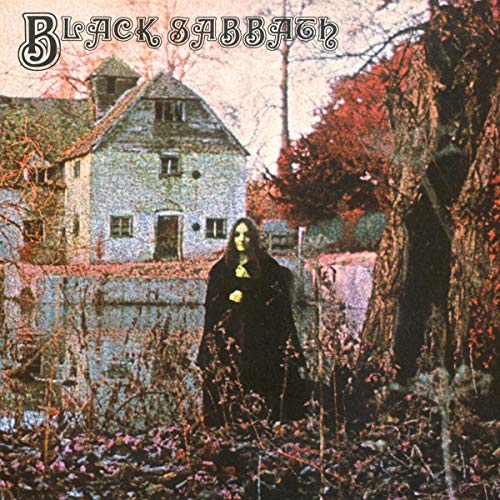 And the music of Black Sabbath was as influential, inspiring hundreds of mesmerized little villains over the last half-century to detune their guitars and go for that same ineffable emotion, the thumping of war drums in the darkness and sinister things lurking just behind the treeline. Of course, the beauty of Black Sabbath is that it doesn’t come with any visuals, apart from a nice lady in a robe in front of a water mill on a foggy night. I’d wait a few years before showing my daughter the movie the band borrows their name from but there’s nothing dripping, no viscera or glowing red eyes. Instead, there’s just a singularity of emotion that your kid will hear and point out “That’s creepy!” with delight. At least mine did.

There’s an elegance to Black Sabbath, particularly early in their discography that is mesmerizing. The band writes ear-worms every bit as infectious as “Five Little Pumpkins,” and presented with the singularity of vision that a four-year-old immediately recognizes. Anyone who has tried to distract one from a favorite cereal in a supermarket knows how heavy that can get, and anyone who has had to inform one that playtime is at an end might recognize the “baleful eyes” of Milton’s poetry.

I’m a firm believer in catharsis in music, and so is my daughter who immediately understands the willful insistence of Ozzy’s oblique bleating and Iommi’s dark lullabies. She doesn’t know any more about demons than she does about cockerels crying and we haven’t quite gotten to the Phrygian mode in her music lessons, but she approaches Sabbath-like many a shaggy discontent has in years past: simply and with open-eyed awe. Cause it’s spooky but it rocks.

ADVERTISEMENT
ADVERTISEMENT
More From Play
Play The 33 Best Riddles for Kids That Aren’t Too Confusing
Play 50 Tricky Riddles That Will Keep Even the Smartest Kids Guessing
Play 78 Funny Jokes for Kids (And Adults Who Like Dumb Jokes)
Play The 21 Funniest, Snowiest Winter Jokes for Kids and Chill Adults
Play 87 Coronavirus and Quarantine Jokes to Retrain Your Face to Smile
Play 26 Funny, Clean Jokes for Work That Don’t Cross Any Lines