'Nobody Does It Better' might be the greatest behind-the-scenes book about movies, ever.

Are you into film history and useless facts about James Bond? Good news, an absolutely addictive new book has just been published, and it’s probably the most fun you’ll have not seeing a James Bond movie, ever.

This week, a new 700-page tome titled Nobody Does It Better hit bookstores and online booksellers and it’s really, really fucking cool. Written and compiled by longtime pop culture historians and journalists Edward Gross and Mark A. Altman, this book takes you through the entire 58-year-history of the James Bond movies, one film at a time. Ever wondered what it was like when they were trying to recast Bond? Curious about how those early Connery films pulled off those massive set pieces and crazy stunts? Want a little behind-the-scenes Bond gossip. It’s all here. 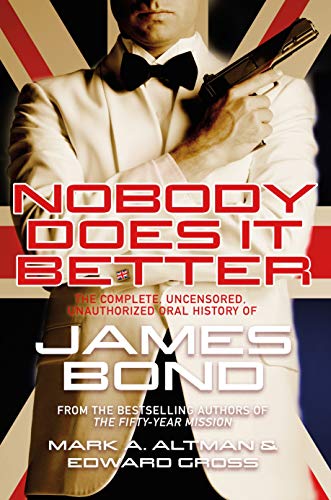 Nobody Does it Better: The Complete, Uncensored, Unauthorized Oral History of James Bond

The best book about James Bond, ever!

The subtitle of the book is the Complete Unauthorized, Uncensored Oral History of James Bond, and that’s important, because for the most part, the authors of the book, let their subjects do the talking. This book is broken up into different decades of Bond, but the meat of the text is predominantly just direct quotes from every single important person who worked on these films. Whether its Daniel Craig’s stories about working with Eva Green or the various writers revealing the exact moment when the Bond puns were invented, you’ll learn more about the hidden world 007 just by reading two pages. This book is packed with great information.

Even if you’re a casual fan of Bond, there’s a good chance this book will leave you shaken and maybe a little bit stirred.

ADVERTISEMENT
ADVERTISEMENT
More From Play
Play The 33 Best Riddles for Kids That Aren’t Too Confusing
Play 78 Funny Jokes for Kids (And Adults Who Like Dumb Jokes)
Play The 87 Funniest Knock-Knock Jokes for Kids
Play 50 Tricky Riddles That Will Keep Even the Smartest Kids Guessing
Play Did Ash Ketchum Eat Pikachu? Hilarious Viral Video Makes Case for Chowing Down on Pokémon
Play Pattinson’s Batman Voice Is on Point and People Are Loving It