Dreamworks Turned John Hodgman Into a Cartoon Wolf in a Turtleneck

The author, podcast host, and all-around guy-that-you-recognize reveals why 'Kipo and the Age of Wonderbeasts' is a new kind of family show.

In his latest memoir, Medallion Status, John Hodgman makes two references each to the films Blade Runner and Dune. For an ’80s child like me, this is a special brand of dork-dad virtue-signaling. Yes, I want to be in whatever club Hodgman has casually invented for dudes who want to talk about obscure sports paraphernalia while we genuinely debate if it’s socially acceptable to wear Doctor Who infinity scarves in public. So, if you have a tween or pre-tween, and you’re looking for a new post-apocalyptic animated kids TV series that doesn’t suck, you’ll be rewarded. This show exists. Created by Dreamworks Animation, the show is called Kipo and the Age of Wonderbeasts and your old pal, John Hodgman snuck in there as the voice of a gentleman wolf astronomer named Billions.

“I had zero hands in crafting Billions,” Hodgman tells me on the phone. “Actually, I’m one of two wolves named Billions, the other played of course, by my brother in animation and my idol in real life GZA from Wu-Tang Clan. It was a very strange experience to portray his wolf brother. All I knew going into the role was this question: Do you want to play a wolf that wears a turtleneck and thinks he’s Carl Sagan? I said, ‘Yeah, of course.’ I did not know that was a life’s dream but now it is one come true.”

If you’ve listened to Hodgman’s podcast — “Judge John Hodgman” — or read his books, or you remember him from The Daily Show or as the guy who said: “I’m a PC” in those old Mac versus PC commercials, let me tell you something: John Hodgman is exactly what he seems like in all the stuff he manufactures, with one key difference. The real John Hodgman, the unfiltered one on the phone doesn’t seem like he’s being fun or honest for an audience. It seems personal. It’s like an old friend and he knows that you know that he knows you guys both get it. In other words, the phrase — a wolf that wears a turtleneck and thinks he’s Carl Sagan — could describe a kind of internalized religion for certain dads.

“I talk about it in my book, I tend to typecast either as a nerd, or you know a doctor, or a professor, or any kind of person wearing glasses. That’s my specialty,” Hodgman says. “But then when I grew some ill-advised facial hair a couple of years ago, my repertoire expanded to creeps and perverts, um and evil people. And so the wolf named Billions that I play, my typecasts come at me at two angles: One, I am a nerd and a wolf who has become evolved beyond his instincts and wants to expand his horizons semi-literally by staring at the stars contemplating the cosmos. But at the same time, I am a creature of the night and a little bit of a monster. So you know, it’s two sides of the beast of the rather low-denomination John Hodgman coin.”

To be clear, Hodgman and GZA’s astronomer wolves are not the main characters in Kipo and the Age of Wonderbeasts. In fact, they don’t even show up until episode five. The series itself is set in a dystopic Earth in which our hero — a young girl named Kipo — navigates a transformed world populated by a lot of mutated animals. The titular “Wonderbeasts,” include talking insects, snakes, a blue pig with four eyes and eight legs, and of course, Hodgman’s wolf pack.

“Kipo is of a relatively new kind of genre which is all-ages inclusive but it speaks to very mature themes. It’s a new kind of genre of animation that respects children rather than talks down to them but gives them stories that have real emotional resonance and maturity. For that reason, it is equally enjoyable by the adults in their lives. I’m not sure that ‘kid-friendly’ is a useful term. It’s not kid-friendly, it’s simply not kid-adverse. Because,  if anything it’s more respectful of children.”

This distinction — that how we define kids’ entertainment shouldn’t be so rigid — isn’t something you tend to hear from celebrities who lend their voices to animated projects. Hodgman is right. Kipo and the Wonderbeasts wouldn’t necessarily be appropriate for a toddler, but if a child is over the age of 9-years-old or so, there’s nothing in this series that would repel them. That said, it’s not placating to them either. Children are fairly smart and often can tell the difference between narrative art that is pandering and narrative art that just happens to be for them, too.

“Well, my friend Griffin Newman pointed out to me that Frank Langella —one of the greatest actors of our time —considers Skeletor to be one of the greatest roles he’s ever had,” Hodgman says, doubling-down not only ’80s nostalgia, but bringing home his larger point: Langella took his role as He-Man’s nemesis seriously, which is why kids connected with the world of Masters of the Universe. The essential difference now is that newer kids’ shows, like Kipo, are a little more ethical. Netflix might want you to get a subscription, but it’s not like they’re pushing an entire toyline at the same time.

“What we generally don’t get from post-apocalyptic stories often is a sense of optimism,” Hodgman explains. “With all due respect to The Walking Dead —which is a great comic book and a great show —but it’s a very kind of grim adult fantasy: ‘Gee, I sure do wish society would collapse so it would be acceptable for me to carry a crossbow around and shoot people.’ This isn’t that. Kipo and her friends occupy a dangerous world. They are a group of friends who are from very different backgrounds and they model a new way forward. It’s nice to see a post-apocalyptic Earth scenario where the message is: You know it might be ok? It might be fine. We might have to run away from 30-eared mega rabbits but we can survive. I think that’s a very comforting and deeply optimistic message to give to kids.”

Kipo and the Age of Wonderbeasts is streaming now on Netflix. 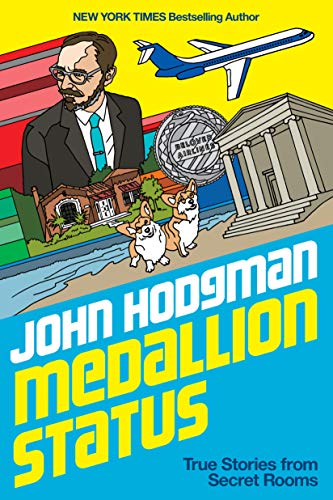