10 years later, Adam Mansbach wants still his kids to do what he says. Now the whole family is dropping f-bombs.

Adam Mansbach is just a tired dad. In that way, he’s like most parents. His kids won’t eat what they’re supposed to, and they’ll fight him to the bitter end when it’s bedtime. The only difference between Mansbach and the exhausted parent reading this is that Mansbach wrote a famous picture book about being super tired and wishing a child would just go the fuck to sleep. You’ve probably heard of the book Go the F**k to Sleep and its two sequels — You Have to F*cking Eat and F*ck, Now There Are Two of You. But did you know it’s been a full decade since the first book become a brilliant and hilarious phenomenon?

If you’re late to the party, here’s everything you need to know about these hilarious not-quite-kids books, and the origin story of the exhausted dad who wrote them. Fatherly recently caught up with Mansbach to talk about the release of all three books in one box set, the origin of the first book, and just how many f-bombs his kids drop on a daily basis.

For those who may not know, briefly remind us of your origin story? How did the first book come about?

I was a mild-mannered novelist who got bitten by a radioactive 2-year-old, and the next thing I knew, I’d written GO THE FUCK TO SLEEP. Which I didn’t really think was a publishable book, to be honest – there was no such thing as an obscene fake children’s book, and also I thought maybe I was the only one who felt this way. But it turns out that the book tapped into some universal feelings, and kind of gave everybody permission to talk about them. I did a reading of the book, months before it was scheduled to be published, and it skyrocketed to #1 on Amazon, and basically shit has been nuts ever since. It also didn’t hurt that Sam Jackson read the audiobook… or that since then GTFTS has also been performed by Cardi B, Werner Herzog, Jen Garner, Thandiwe Newton, Gilbert Gottfried, LeVar Burton, that motherfucker from the Great British Bake-Off, all kinds of incredible people.

What’s changed in the way you view parenting over the years?

It’s funny; when I wrote the book I had a two-and-a-half-year-old daughter. Ten years later, I’ve got… a two-and-a-half-year-old daughter. And a thirteen-year-old daughter. And a four-year-old daughter. I’m like a fucking farmer in a joke. So a lot has changed. I’ve got a play zone defense, for one thing. I’ve had to face the agonizing fact that at some point, at some age, you can no longer solve all your kids’ problems. But fundamentally, I still believe the most important thing is to keep your sense of humor, your sense of perspective. Try to have kids with somebody you really like, and try to not lose sight of that fact. Realize that kids are soaking up everything; you’re modeling all kinds of shit to them every second, whether you think you’re parenting at that moment or not. 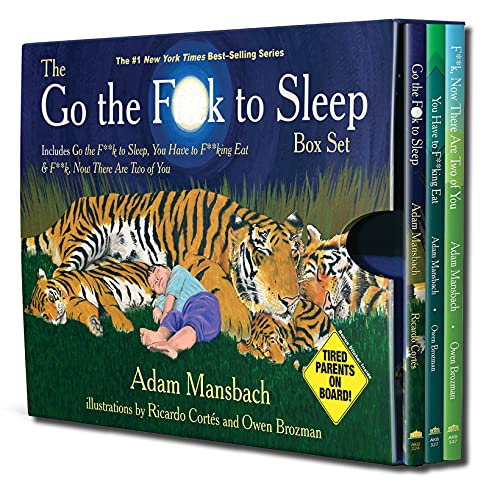 All three hilarious books in one place.

Parents live in fear of being judged by other parents for not being understanding enough, for not being calm enough. What’s your take? Can parents freak out?

I mean, you can freak out, but you’ve got to realize that you’ll look like an asshole. Even if every other parent has felt exactly that way, and in theory ought to totally sympathize with you… they don’t. At the moment, chances are you’re just that schmuck screaming at a toddler, making a bad situation worse. They’re patting themselves on the back for not being you. Screaming at kids also isn’t that effective. Because nothing is that effective. So you can be cool and ineffective, or you can publicly humiliate yourself and still be ineffective. I prefer to go the other route; in public, I try to appear totally unflappable, because I hate drama of any kind. I’m sure other parents judge me for that. “That guy’s kid just ate a tarantula! Why isn’t he more upset?” But I’m from the “walk it off” school of parenthood. I’ve been to the emergency room once, in thirteen years of parenting three kids. That place sucks. If you don’t have a visible bone sticking out of your body, you’re getting a Band-Aid and maybe a piece of fruit. And I’m not screaming at you in public unless you’re in imminent danger. I’ll tell you what you did wrong later, at home. When you’ve forgotten all about it. Hmm. I gotta rethink this.

Have you ever actually told one of your children to “go the fuck to sleep?”

I tell my oldest daughter that all the time. The little ones, not so much, but my four-year-old knows the title. This summer, she told strangers on the beach all about it. And I don’t mean once. I mean every day. It was like her opening line.

What’s the biggest challenge of parenting? Is it the loss of sleep? The loss of privacy?

Loss of sleep is some real shit. It can lead to insanity and death. If you’ve got kids who are just hardwired to wake up at 4 am every morning ready to start the day, I can’t imagine you’ve got a bigger problem than that, unless you just got shipwrecked or something. For me, it’s just the grind. Like, these motherfuckers are always there. They need to eat every single day. There’s a kind of bone-deep exhaustion that can come from the constant low-level struggles, the fact that everything with young kids is a mini-fight — getting dressed, brushing teeth, eating, bathing, putting on sunscreen. If you can’t keep it in perspective or find a way to recharge or not take it too seriously, you can end up mad all the time, frustrated all the time. And that can seep into everything else you do, your relationship with your partner, whatever. With my younger kids – who have a different mother than my oldest – I’ve tried to really shift my perspective and not let the reservoir of goodwill deplete, not default into a kind of head-down, let’s-just-get-through-it vibe, and instead remember that we actually fucking like each other and our relationship is not based on being co-parents but transcends it if that makes sense.  This is actually a much better answer to question #2 than to this one.

How will your children regard these books when they are adults?

With reverence, as the things that put them through college or wilderness training or whatever the fuck.