Homer Simpson isn’t perfect. He strangles Bart, yells at Lisa for playing her sax-a-ma-phone — and forgets Maggie’s even there. But for more than 27 years and 600 episodes, Homer has served as an instructive worst case scenario for dads everywhere. Plus, he’s tripped on peyote, been to outer space, designed the family car of all time, and played baseball with Mike Scioscia. There must be some collected wisdom here. Here’s just a small sampling from the longest enduring patriarch on television. Mmm … patriarchy.

On The Importance Of Trying
“Kids, you tried your best and you failed miserably. The lesson is, never try.”

On Having A Strong Work Ethic
“No, no, no, Lisa. If you don’t like your job, you don’t go on strike. You just go in every day and do it really half-assed. That’s the American Way.”

On Controlling Rage
“Just squeeze your rage up into a bitter little ball and release it at an appropriate time, like that day I hit the referee with the whiskey bottle.”

On Failure
“Okay, son. Just remember to have fun out there today, and if you lose, I’LL KILL YOU!” 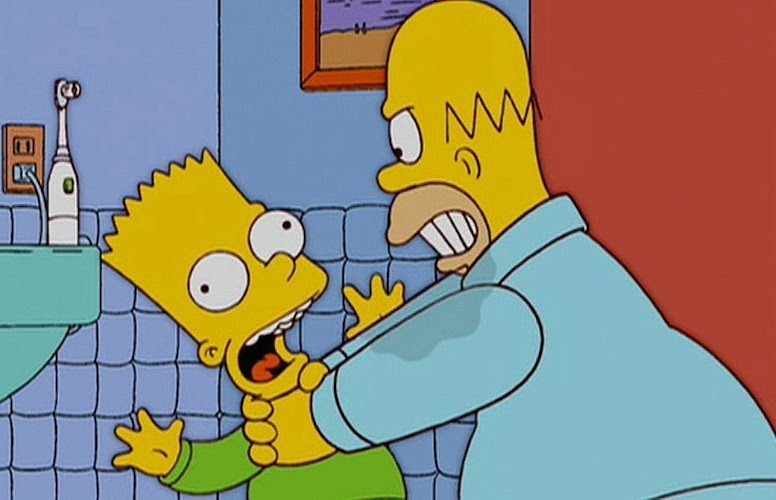 On Life’s Unspoken Rules
“The code of the schoolyard, Marge! The rules that teach a boy to be a man. Let’s see. Don’t tattle. Always make fun of those different from you. Never say anything, unless you’re sure everyone feels exactly the same way you do. What else …”

On The Benefits Of Being A Parent
“Kids are great, Apu. You can teach them to hate the things you hate and they practically raise themselves nowadays, you know, with the Internet and all.”

On Being Politically Correct
“Remember that postcard Grandpa sent us from Florida of that alligator biting that woman’s bottom? That’s right, we all thought it was hilarious. But it turns out we were wrong. That alligator was sexually harassing that woman.”

On Quiet Desperation
“Marriage is like a coffin and each kid is another nail.”

On Trusting Your Gut
“The key to parenting is don’t overthink it. Because overthinking leads to … what were talking about?”

On Disappointing Your Kids
“I think the saddest day of my life was when I realized I could beat my dad at most things. And Bart experienced that at the age of 4.”

On The Challenges Of Fatherhood
“It’s not easy to juggle a pregnant wife and a troubled child, but somehow I managed to fit in 8 hours of TV a day.”