David Duchovny Is an Analog Dad In a 5G World

"I just had this idea of a guy raising his kids off the grid completely."

There are actors who speak in crisp, rehearsed soundbites. David Duchovny is not one of them. On this winter morning, he’s at home in New York, stranded after his flight to Europe was canceled due to an onslaught of horrible weather. Duchovny is an analog man, one who grapples with what it means that so many of us treat our phones as an appendage.

“I think so much of learning is a very human interaction. I’m not saying you can’t learn over the computer or in a phone call or a FaceTime. But it’s different,” he says. “I’ve been working a little bit and, and sets are all cordoned off and it’s harder to have a connection.”

As he talks to Fatherly about raising two young adults, crafting his new book, and carrying the massive legacy of The X-Files, Duchovny, who earned a literature degree from Princeton and a master’s from Yale, also ponders whether we’ve perhaps lost bits of our humanity as so much of world has gone fully digital.

This book is about isolation, and reentering society, which I think is something we can all relate to. What inspired you to write it?

I just had this idea of a guy raising his kids off the grid completely. And then having to all of a sudden put these kids into modern-day high school — these kids who not seen a television, all of a sudden it’s the phone. And I wanted to meditate on the difference between a book education, which is what he gives them. It’s not like he raises them wild. But what happens when you take those kinds of kids and put them in our culture of today? I wanted to write about America today, but I also wanted it to be a story that had high stakes fathers and sons stuff.

Funnily enough, I interviewed Samantha Bee while she was reading your book and she really liked it.

I love her work. I love her spirit. I love what she does. Sam was really nice enough to do it because asking people for blurbs — it’s a really big deal because it means they’ve got to read it, first of all, which is something. So I’m always like, look, it’s really okay if you don’t like it, that’s fine. I’m aware that not everybody’s going to like everything I do. So if you do take the time to read it and you do like it, and you can think of something to say, that would be great. But we’ll still be friends and I’ll do things for you.

Your kids are just about grown, with one still in high school. How do you reflect back on raising them?

We moved from LA 12 years ago because we thought we’ll raise our kids in New York. And I don’t know that it’s better.  What were we protecting them from? What were we exposing them to? What can a parent do? What are the limits of your control? What should be the limits of your control? How much should you protect? How little should you protect? We take about, take phones away at night, but we never really made a program. I guess what informs it is my concern, maybe my impotence about it, just my inability to protect my children from what I see as harmful. I’m talking about the messenger, the screen, about the lack of humanity. I’m talking about the speed of information.

And on the other hand, when I talk about it with my ex, the mother of my children —  there’s always been these times in history where gatekeepers and cultural historians will say, this changes everything. And it’s bad.

I’m looking at that phone and, and I’m thinking the same way they thought about the printing press and the novel and television. And I’m thinking that’s the devil. And the truth is that whether it’s the devil or not, who knows, but it’s going to create a different consciousness. So these kids, my kids, your kids, their consciousness is going to be different from ours.

Do you think you prepared your kids as much as you could for what the world holds in store?

No, I don’t. I just don’t know where the time went. I just thought, Oh, there’ll be time to teach those lessons. There’ll be time to have those discussions. There’ll be time to read those books. I have an 18-year-old son, a 21-year-old daughter and I think they’re both terrific. I’m not an expert. I’m probably a little more expert now than I was. I was living my life too, I had my own ambitions and interests. It’s probably good, not to be completely focused on your kids. It’s the version of, I wish I hadn’t gone to the office so much. I didn’t have an office but I had work.

How does it feel, in hindsight, to have been part of something like The X-Files, something that’s so part of the zeitgeist and remains eternally beloved?

When I was in the midst of it, I would struggle against it because I wanted to do more things. And I thought I would do something that would partly erase it, at least for me personally.  And then as years went by, I realized it wasn’t just a popular TV show. It was a generational piece of entertainment. I’m not going to do that again. It won’t happen nor should it happen again, probably, or can it happen. I made peace with that. It’s kind of great that I got to be an integral part of that time. I embraced the love of the people I got to do it with. That’s my life, the making of it. My life is not the consuming of it. That was many, many years of certain time of my life filled with hopes and disappointments.

I got a buddy, Matt Warshaw. I grew up with from the neighborhood and he’s a reader and for some reason, a country-western music lover — we can’t figure that out. We both grew up on Lower East Side. Chris Carter is somebody that I send stuff to early. You gotta be careful who you give it to because you don’t want to get shut down in a certain way. I just wrote a short story and I’d never written one and I sent it to my friend, Jess Walter, who’s a novelist. 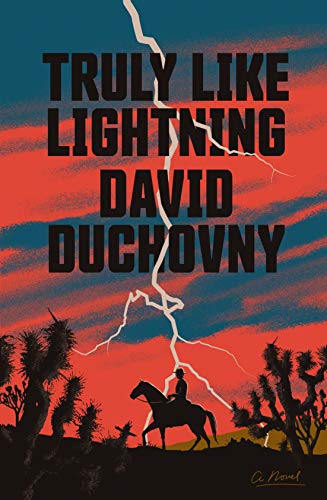 Duchovny's literary novel is about a man, in a plural marriage, raising his family off the grid.