The Best Dinosaur Books for Kids

From T. Rex-loving toddler to 10-year-old Jurassic genius, there's something for everyone in this list of dinosaur children's books.

It should come as no surprise that dinosaur books for kids are as popular as ever. Who doesn’t love dinosaurs? Whether we’re viewing them on the big screen, playing dinosaur apps and games, gazing at dinosaur bones at a museum, or watching animatronic re-creations of them lumbering around a primordial set, it’s almost impossible to avoid being awestruck by these hallmarks of a world long gone. “They are creatures bigger than us, sometimes bigger than our imaginations,” says Jeffrey Salane, the editorial director for Simon & Schuster’s imprint Little Simon. “They are terrifying, fascinating, and just plain cool all at once.” Dinosaur books are no exception.

RELATED: The Best Movies for Kids Who Love Dinosaurs

“Dinosaurs are the rare characters that you could probably drop into any situation and instantly create a story worth reading,” he adds, noting that they can make for compelling subjects for both fiction and nonfiction, and as protagonists or background elements for the narrative. Here’s a look at a number of dinosaur children’s books that young readers may find thrilling, educational, and flat-out fun. 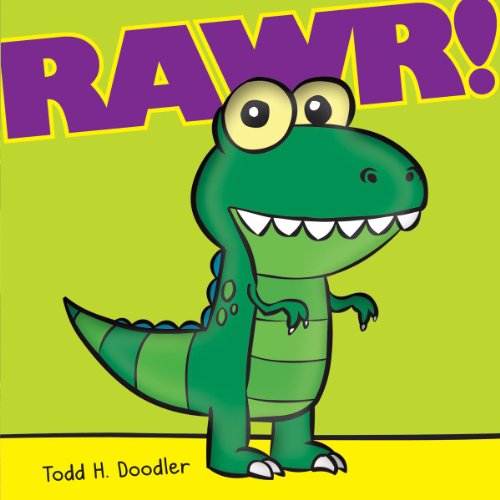 When one thinks of a Tyrannosaurus Rex, giant carnivore and nightmare fuel usually come to mind. That's turned on its head in Todd H. Doodler's Rawr!, which features one seriously cute T. Rex — in this case, a well-intentioned one who's baffled by everyday school routines — that you're likely to encounter in any kind of kids dinosaur book. Suitable for kids aged 3-5. 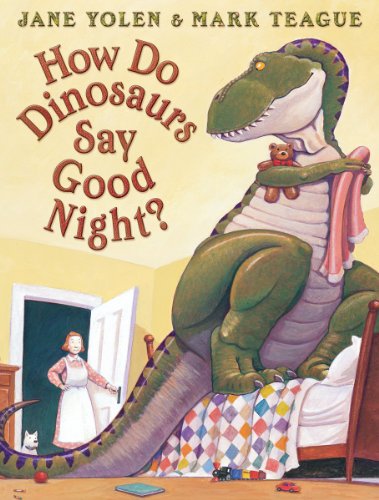 How Do Dinosaurs Say Goodnight? by Jane Yolen

Throw a triceratops and pteranodon into the mix, and bedtime becomes markedly more fun. This book breaks down exactly how dinosaurs say good night. Is it when dad turns off the light? And does the dino yell and pout? The twist is that this truly hilarious book features human parents putting their dinosaur children to bed, thus driving home the point that everyone needs to get some sleep. 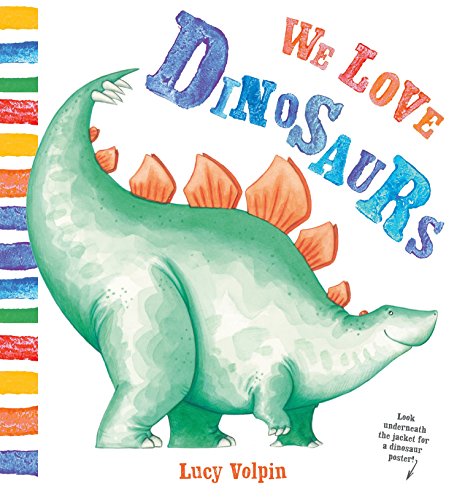 We Love Dinosaurs by Lucy Volpin

This rhyming tale will double as a new bedtime song. Simplicity is the driving force behind this rhyming British ode to different smiling dinosaurs. Its only ambition is to introduce the youngest reader to a varied set of friendly dinos that grace the page in primary-colored water paint and hang out with other species, predator-prey hindrances be damned. Fundamental differences between dinosaur types — fast vs. slow, herbivore vs. carnivore, tiny vs. enormous — are presented in a catchy, sing-song style. 'We love ones that like leaves to eat, and ones that like a meaty treat!' 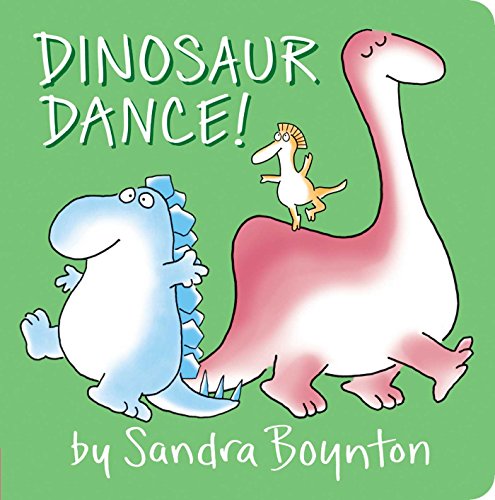 As long as you’re not standing directly below them at the time, a bunch of dinosaurs deciding to cut a rug is probably a sight to behold. That’s exactly what you get in this dinosaur book by Sandra Boynton. Suitable for kids aged 1-5. 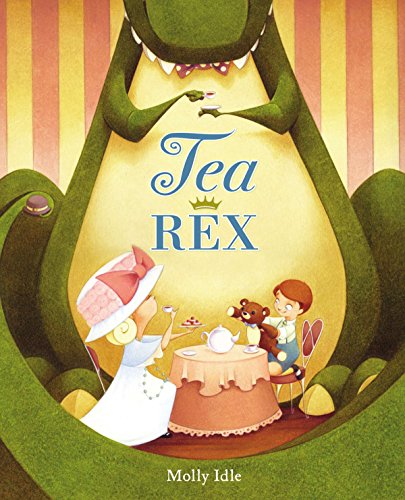 Odds are, you’ve heard the expression “bull in a china shop.” The central concept of Molly Idle’s Tea Rex is a bit like that, except with a Tyrannosaurus rex attending a tea party. That juxtaposition is the stuff of which memorable images are made – and is one of several books by Idle to put dinosaurs front and center. Suitable for kids aged 3-5. 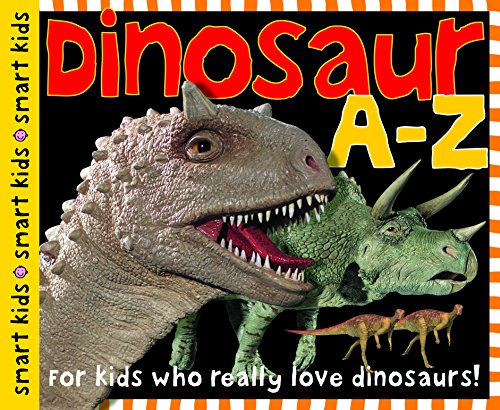 This familiar format ups the ante with cold hard facts and easily digestible diagrams. Informative notes in a handwritten font — as if a 5th grader were jotting down the most interesting facts — highlight a different dinosaur for each letter of the alphabet. It's wholesomely encyclopedic, filled with tidbits on species you likely haven’t heard about (Fabrosaurus, anyone?) including a handy size-comparison chart and a pronunciation guide with a phonetic breakdown, so that kids and adults alike can wield the correct scientific name when sharing their deep dino knowledge. 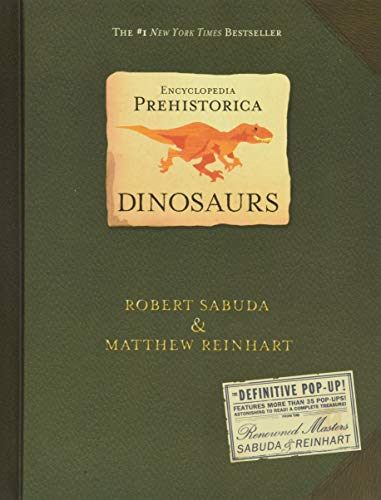 Some of our interaction with dinosaurs depends on surprise – whether it’s the shock of seeing them in contemporary surroundings or the thrill of seeing one in the midst of a hunt. There are plenty of surprises to be found within this gorgeous pop-up dinosaur books for kids as well, encompassing everything from the everyday lives of dinosaurs to the modern-day search for their fossils. Suitable for kids aged 5-8 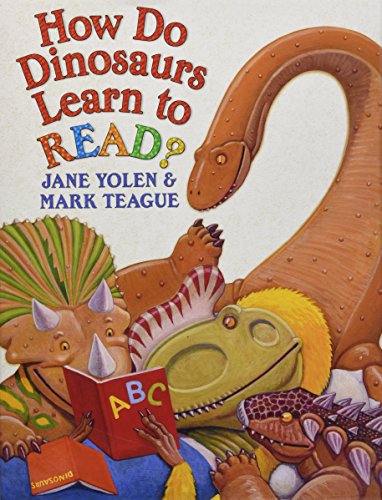 How Do Dinosaurs Learn to Read? by Jane Yolen and Mark Teague

A series sure to spark the imagination. Getting to bed on time, playing nicely with others, visiting the doctor, expressing difficult emotions… Prolific author and Caldecott winner Janet Yolen has captured the agony and ecstasy of each moment with a book series that imagines our children as anthropomorphized dinosaurs, colorfully drawn and detailed by Mark Teague. Dot-eyed parents and friends, like ancillary characters from a retro Popeye comic, watch in stunned silence as the dinos commit mayhem. The series is extensive, but this book is a good place to start. 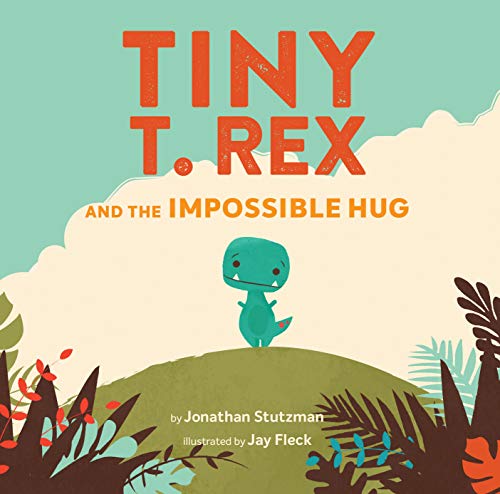 Tiny T. Rex and the Impossible Hug by Jonathan Stutzman and Jay Fleck

Tiny T-rex arms take on a whole new depth in this touching story about being there for friends during good times and bad. This may be the most adorable and imaginative children’s book employing dinosaurs to teach kids empathy. This sweet carnivore is on the search for someone to hug, specifically his friend Pointy, a down-in-the-dumps Stegosaurus. Despite various Cretaceous creatures telling Tiny that a T. Rex’s simply isn’t built for hugs, he searches high and low for a way to cheer his friend up, and in doing so offers a nuanced insight on how to deal with others’ negative emotions. 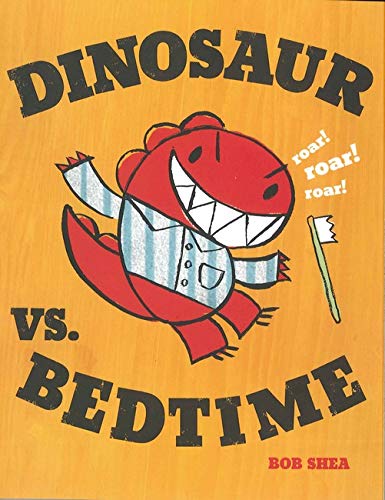 Dinosaur vs. Bedtime by Bob Shea

A book that tells the familiar tale of wrangling a little dino into bed. Written for toddlers discovering that their compulsions need not dictate their every behavior, Bob Shea’s breakout series follows an indiscernible little dinosaur with a devilish grin and red skin. He just wants to roar when he should be yawning, mistakes his potty dance for a victory dance and forgets to use his 'inside roar' at the library — the purist’s take on dinos behaving badly for the sake of education. The books’ popularity is due, in no small part, to the many moments throughout each reading that call for parents and children to let out a fierce roar before getting on with mastering life skills. 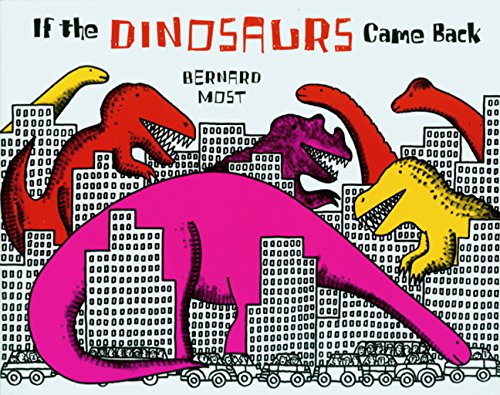 If the Dinosaurs Came Back by Bernard Most

Five Jurassic Park movies later, the juxtaposition of ancient reptiles and the modern world is clearly a sight to behold. In this classic work, Most envisions some decidedly practical tasks that dinosaurs might be well-suited to take on in the present day. Suitable for kids aged 4 to 7. 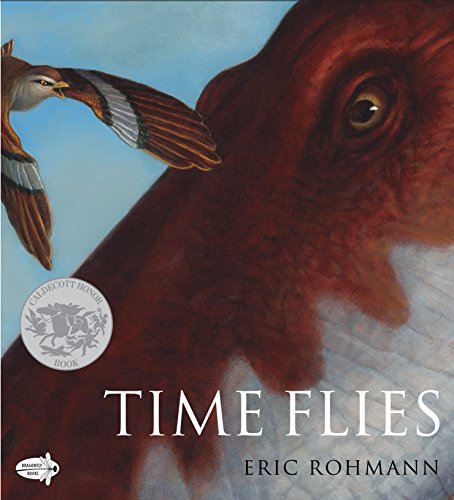 The more we learn about dinosaurs, the more we recognize their connections to their closest living descendants, birds. That’s the subject of this wordless tale, named a Caldecott Honor book when it was first published, that revolves around the interaction between a bird and a dinosaur within a museum. Suitable for kids aged 3-7. 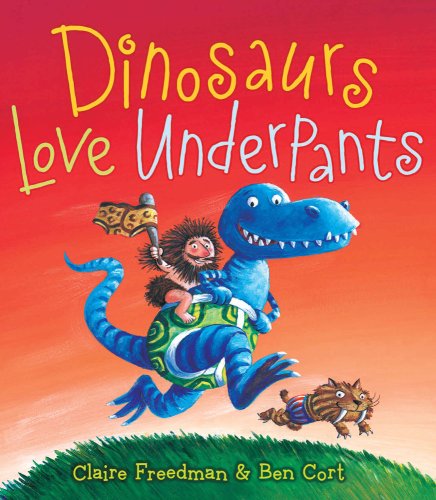 Some dinosaur children's books are rooted in science, striving to impart a sense of accuracy and the historical record to even the youngest of readers. Dinosaurs Love Underpants is not one of these books – but if you’ve ever wondered how underpants might have factored into the extinction of dinosaurs, your answer might be found within these pages. Suitable for kids aged 3-7. 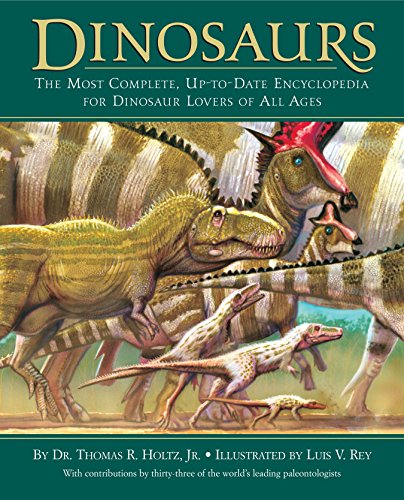 The Most Complete, Encyclopedia for Dinosaur Lovers of All Ages by Dr. Thomas R. Holtz, Jr

Sometimes, when you’re obsessed with dinosaurs, you might just want to go straight to the science – or, at least, to get a comprehensive look at nearly every dinosaur known to humanity. That’s where this massive guide to dinosaurs, designed to be friendly for readers young and old, comes in. Younger readers can lose themselves in the illustrations, while parents can delve into the science behind how dinosaurs lived; it’s a win for everyone, really. Suitable for kids aged 8-12. 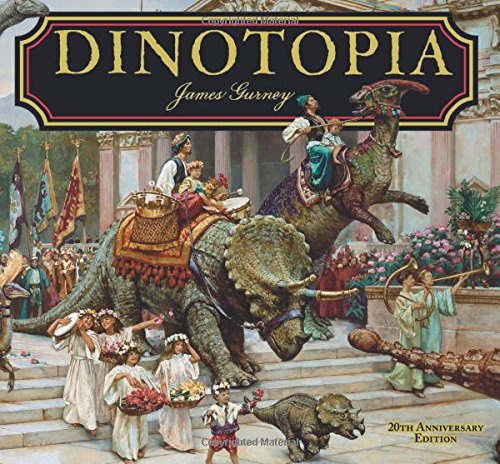 Dinotopia: A Land Apart from Time by James Gurney

James Gurney’s novel Dinotopia imagines a place in which dinosaurs remained alive until the present day: a concept that's fascinated authors for nearly as long as humans have known about the existence of dinosaurs, period. Add in some lush illustrations and great attention of detail and you have a story that remains compelling years after its initial publication. Read it out loud to the young ones, or let this be your dino-loving fourth-grader dive into this dinosaur children's book. Suitable for kids aged 11-17. 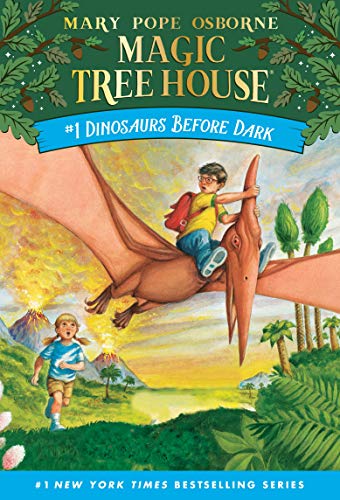 A great gateway book into a wonderful series. The first book in this admired New York Times’ bestselling series captured the imaginations of millions of elementary school kids and their annoying little siblings with the story of Jack and Annie. When they stumble across a treehouse that can bend the rules of time and space, Jack and his little sister Annie discover the library within. They peer into a book about dinosaurs that transports them to the Cretaceous where/when they befriend a Pteranodon and narrowly escape the stumpy claws of a Tyrannosaurus Rex. Dinosaurs Before Dark, and all the Magic Tree House books that follow present kids with the beauty of bringing worlds to life through reading. 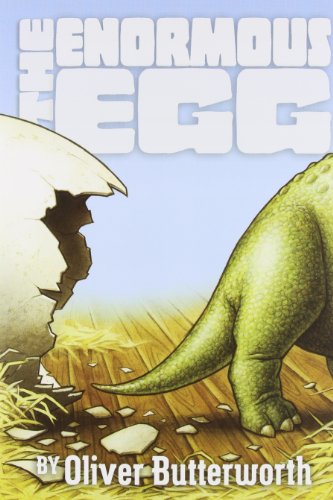 The Enormous Egg by Oliver Butterworth

A great early chapter book for dinosaur lovers. First published in 1956, this heartwarming novel about a good-natured farm boy from Freedom, New Hampshire whose hen lays a huge, leathery egg one summer day stands alone as a classic in the genre of children’s dinosaur books. Nate Twitchell raises Uncle Beazley, his new pet Triceratops, with the love and protection you’d expect from an all-American kid taught to take responsibility seriously. It’s E.T. meets Charlotte’s Web as exploitative businessmen, stuffy scientists and duplicitous senators try to have their way with Uncle Beazley. Nate quickly learns he’s got something far more valuable than anything they could offer, and that it’s worth fighting for at the highest levels. This book is great for 5th graders on up in need of an imaginative lesson in responsibility and bravery. 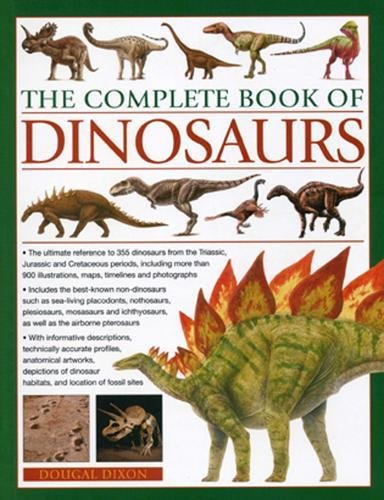 The Complete Book of Dinosaurs: The Ultimate Reference to 355 Dinosaurs

Everything your kid could possibly want to know about dinosaurs. Expect this one to last over many, many bedtimes This dense compendium covers the known and lesser-known species of dinosaurs, their habitats, time-periods and behavior in descriptive paragraphs accented by traditional illustrations. Arranged as an encyclopedia complete with anatomical and skeletal drawings, Dougal’s work a fact-heavy treasure for middle school students whose prehistoric research projects could use a little more depth than the average Wikipedia entry has to offer. 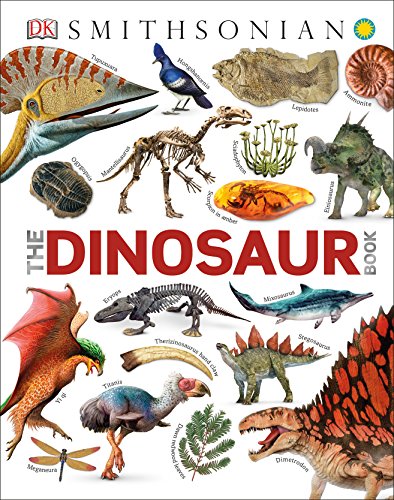 The next best thing to a trip to the museum. There’s no substitute for visiting a natural history museum and coming face-to-face with a towering T-rex skeleton. But this is pretty close. A sparse, elegant layout highlights extremely lifelike animal models with a progression that carries you through the origins of life and into the age of the dinosaurs. The creatures are divided by species and type, arranged for readers of any age to enjoy at their own pace, jump around, read the captions or simply marvel at the pictures. The last section, like the final exhibit of a satisfying dinosaur museum wing, teases out the rise of mammals and leaves your curiosity piqued.