Adam Sandler fans can debate what their favorite movie of his is. People can make the case for everything from The Waterboy to 50 First Dates to Happy Gilmore, Punch Drunk Love to Billy Madison, and from Uncut Gems to Click to You Don’t Mess with the Zohan. But we’d argue that there’s no argument whatsoever about Adam Sandler’s best movie.

And that is… The Wedding Singer.

All of the Sandler movies listed above have something to offer. There’s no beating the fight between Sandler and Bob Barker in Happy Gilmore. Emmanuelle Chriqui was never more appealing, funny or gorgeous than in You Don’t Mess with the Zohan. Sandler has displayed his dramatic acting chops in more films than most people realize, but he particularly shines in Punch Drunk Love and Uncut Gems. All those movies, however, are good, but imperfect. The Wedding Singer, however, is pretty much a perfect movie. It’s streaming now on Netflix, but leaving January 31, so if you’ve never seen it, now’s the time, and if you’ve seen it 20 times, well, the 21st time is the charm.

Sandler stars as Robbie Hart, a good-natured and in-demand wedding singer from New Jersey who’s about to marry the wrong woman. Linda (Angela Featherstone) is cold and unlikable and admits she thought he’d be a famous rock star, not a nobody wedding singer. She breaks Robbie’s heart by standing him up at the altar. Meanwhile, Robbie has befriended Julia Sullivan (Drew Barrymore), a sweet and bubbly waitress who’s about to marry the wrong man. Glenn Gulia (Matthew Glave) is a jerk, an arrogant rich guy who seems to barely tolerate Julia and thinks nothing of cheating on her. Julia slowly realizes that life as Julia Gulia might not live up to her expectations. It’s not giving anything away to say that Robbie and Julia belong together, and the rest of The Wedding Singer focuses on them overcoming all the obstacles in their way.

So, what’s so great about the movie? Where to start?

Some actors have chemistry and some don’t. Sandler and Barrymore have it in spades, and it’s worked every time, including 50 First Dates and Blended. They bring out the best in each other and you want to see their characters connect. Beyond the chemistry aspect, Barrymore is just perfect in every scene.

Robbie performs several songs with his band, including covers (“You Spin Me Round”) and an unforgettable original, “Just Kill Me,” which starts slow and builds to a hard-rock, angry —and hysterically funny — crescendo. And then there’s the killer 80s soundtrack: “Der Kommissar,” “99 Luft Balloons,” “Hold Me Now,” “Every Day, I Write the Book,” and “Video Killed the Radio Star,” among many others. The soundtrack is so good in fact, we recommend you party like it’s 1998 and buy the CD right now! 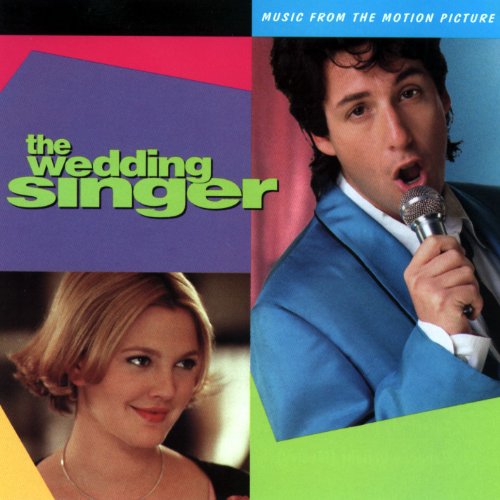 The Wedding Singer Music From The Motion Picture

The Wedding Singer soundtrack on CD.

Sandler would later play too many truly stupid (the unwatchable Little Nicky comes to mind) or over-the-top characters (Jack & Jill, That’s My Boy, The Ridiculous 6), but here he makes Robbie into a likable, relatable guy who means well, occasionally loses his shit, and surrounds himself with a great group of friends (even Sandler regular Allen Covert turns it down a notch).

In addition to all the cool period tunes, The Wedding Singer’s production team nails the 80s vibe, from loud, colorful clothes to a gleaming DeLorean, the Flock of Seagulls’ haircuts to Madonna-Esque rubber bracelets, and, best of all (possible spoiler for the uninitiated), a cameo by Billy Idol as… Billy Idol that’s fantastic and actually drives the plot.

You can’t help root for Julia and Robbie, and a key scene reveals just how decent each of them is. Robbie sings Michael Buble’s “That’s All,” with Julia slow dancing to it with a chubby kid who proceeds to put his hands on her butt. Julia’s reaction is priceless, and the camera cuts back between Julia and Robbie, who roll with the moment and clearly appreciate one another giving the kid his moment.

Ellen Albertini Dow totally steals the show as Robbie’s elderly, energetic neighbor, Rosie. She adorably pays Robbie in meatballs for music lessons but also gives him great advice (which boils down to go get the girl). Additionally, Dow sings two songs. You’ll get all the feels when she croons The Beatles’ “Till There Was You” to her husband Frank at their 50th wedding anniversary celebration, and you’ll crack up when she performs “Rapper’s Delight” by The Sugarhill Gang at that same party.

We can go on and on. Several of Sandler’s friends and SNL co-stars pop up briefly. The late transgender actress Alexis Arquette is wonderful in her scenes as the Boy George-like singer-keyboardist in Robbie’s band, and Christine Taylor brightens every moment she’s on screen as Julia’s cousin, Holly. And, finally, at 96 minutes, The Wedding Singer – a/k/a Adam Sandler’s best movie — neither runs too short nor overstays its welcome.

You can stream The Wedding Singer on Netflix until January 31.
Oops! Please try again.
Thanks for subscribing!

Streaming
ADVERTISEMENT
ADVERTISEMENT
More From Play
Play ‘Spider-Man: No Way Home’ Is Streaming Now — But It Will Cost You
Play Where To Stream the Original 1984 ‘Ghostbusters,’ ‘The Real Ghostbusters’ Cartoon and More
Play How to Watch ‘Mister Rogers’ Neighborhood’ Online Right Now
Play Where to Stream the Classic ’80s ‘He-Man and the Masters of the Universe’
Play How To Watch ‘Indiana Jones’ Movies In the Correct Viewing Order
Play The Best Kids’ Shows With Transgender Characters