Someone on Reddit has once again done the absolute most over the weekend. Reddit user u/nathcun posted on the r/DataisBeautiful subreddit with a graph of a trend he had noticed and begun to analyze naming trends of everyone’s least favorite manager-caller: the Karens of the world. It turns out that, according to his analysis of over 70 years of baby name data in the United States, the analogue of a Karen is not a Ken, or a Jeremy, or a Richard, as both academic experts and citizens of the web have all seemed to suggest. Instead, according to u/nathcun, the male version of a Karen is actually a Terry.

The reasoning behind this? Well, after looking at decades of data, the Reddit user found that men named Terry tend to be the same age as women named Karen — and that the peaks of the use of both names for new babies peaked at the same time, which suggests that many Karen’s likely have peers among them who are Terry’s who thought that call to the cops because someone was drawing in chalk on the sidewalk was totally necessary, or whatever reason Karen’s call the police. 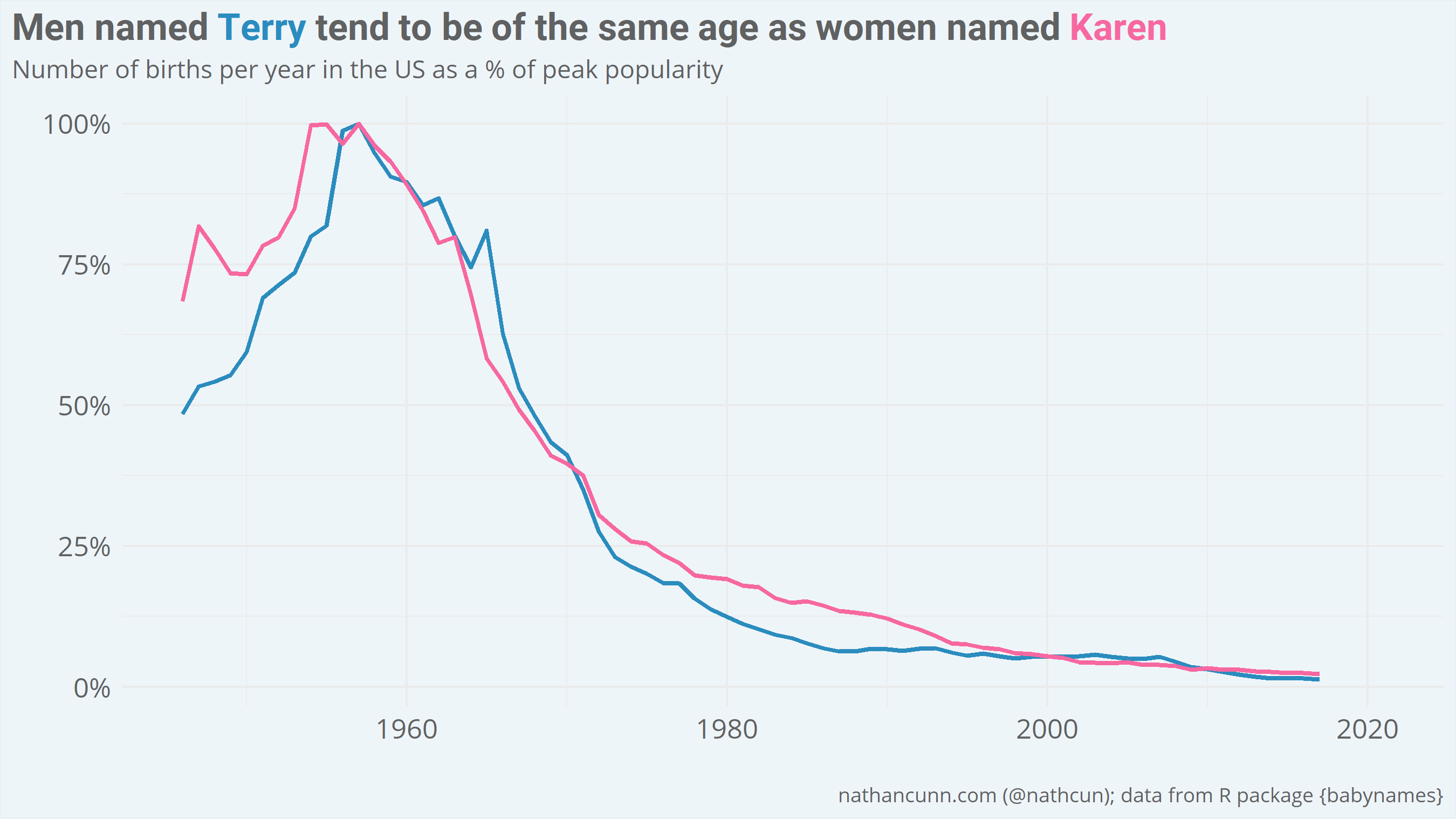 Of course, while the data is interesting, the reality is that the name “Karen” was functionally plucked out of a hat when it became shorthand for entitled, middle-aged white women who used the power of their privilege to harm Americans of color. It’s like the catch-all name for the Amy Coopers and the “Permit Patty’s” of the world, AKA those who would call the cops on Black people for existing in public and not doing any harm to the folks around them. The name “Ken” originated not just from the academic work of Apryl Williams but also after the St. Louis couple who pulled guns on protestors who were walking on the outskirts of their property in the aftermath of the death of George Floyd. While Ken might be a wonderful phonetic analogue to the name Karen, Terry may have more in common with the name Karen than Ken.

ADVERTISEMENT
ADVERTISEMENT
More From News
News The White House’s Plans to Save Your Picket-Fence Dreams, Explained
News There’s a Meteor Shower Shooting Over Your Head Right Now
News Up to $850 in Stimulus Checks Could Be Coming for People in 11 States
News Student Loans Are About to Get A Lot More Expensive — Here’s Why
News What Americans Consider “Wealthy” Has Lowered Amid Pandemic, Survey Says
News This Map Shows Where You Can Buy Legal Weed Now in the United States