Sherlock Holmes and the Case of Covid-19 Anxiety Management

Struggling with anxiety and the burden of empathy amid chaos? Look to the great detective for a solve.

If fear is the mind-killer, empathy and anxiety, frequent co-conspirators, are the mind kidnappers. In the face of odds or obstacles, they make it hard to focus and, in turn, hard to act with temperance and wisdom. In the face of Covid-19 and coronavirus — an existential and economic threat — these feelings trap us in the cramped attics of our minds. How do we fight back? We go to 221 Baker Street and we ask for help.

Who greets us as we enter? If he’s not too busy, Sherlock Holmes. He’s rude and dismissive of our feelings. He doesn’t care about our children’s anxiety or whether we keep our jobs. He’s focused on the crime that has taken place, the theft of our faculties. As we pour out our feelings, he crosses his legs and smokes a pipe. There’s a solution in his mind. Hell, the solution might be his mind.

“I think some degree of intellectual detachment is a useful coping mechanism,” says Maria Konnikova, author of the 2013 book Mastermind: How to Think Like Sherlock Holmes, which explores the value and virtue of cold logic in the face of emotional disruption.  I’m talking to Konnikova, a psychologist and writer with credits at the New Yorker and other spots where one might read articles about how to think because she is both practical and kind. Unflappable. I want that and in an age of hand-washing and hand-wringing, the power of the practical, it seems to me, deserves more than 20 seconds.

“If you take everything personally, and you take every person who dies personally, or you focus on every single person getting sick, you’re going to drive yourself insane,” Konnikova says. “So, I think doing a kind of Holmesian emotional distancing can be a very powerful control mechanism.”

Konnikova says that as someone with a more subtle reading of Arthur Conan Doyle’s masterpieces than most. Whereas Sherlock is understood by many to be an egotist and an asshole — callous in his behavior toward others and dismissive of the humane and human as sub-genres of the illogical — Konnikova posits that he’s the consummate do-gooder. Holmes just doesn’t conflate being seen to do good with being effective at it. He stops criminals and saves lives by operating one level up from those around him. That’s the distance. He’s an asshole for good and functionally if not verbally empathetic.

What makes so effective at achieving his noble ends is his control over his own mind. Holmes is not, as is noted throughout the books, the smart brother. That’s Mycroft. He’s the one with more populist priorities. He is the one who wants to help and is willing to give his entire brain over to that cause, something he does by focusing on what he needs to know when he needs to know it. Infamously, Holmes tells Watson in A Study In Scarlet, that he didn’t know — or care to know — anything about astronomy. Why? It’s not relevant to what he was working on at the moment.

He is on a need-to-know basis with reality. There’s plenty he does not need to know. But, to hear Konnikova tell it, there’s a bit more to his psychological triage than that.

“I think it’s important to draw a distinction between not knowing something and having something occupy active space in your mind,” Konnokiva explains. “It’s not that Holmes doesn’t know the rules of astronomy. He knows it. He’s just kind of choosing what he’s using or remembering at any given point in time. So, he will exaggerate for effect. But it’s not an exaggeration in the sense that it’s not active knowledge. There’s a difference between what you are actively and passively knowing. And I think we can take a similar approach to what’s going on right now with stress related to the pandemic.”

Konnikova points out that for most parents and most people generally, COVID-19 cases and even death counts are astronomically irrelevant. We are not equipped to interpret the data, which only serves to messy our mind palaces.

“I think it’s a very bad idea to tell people not to be informed — that’s where you get Trump’s approval ratings going up or whatever. And that comes from people not being informed and making bad choices,” Konnikova says. “However. I think for mental sanity it’s very important to be in a situation where you’re not just constantly refreshing the news and keeping it all active in your head. What  Holmes would probably do, would be stay informed, be on top of it, and then, put it out of his mind. He would ‘forget it.’ Not in a real way, but in a Holmesian way. You’re filing it away in your attic, your mental filing cabinet. You can access it as needed in the future. But not have it weighing on your mind every single moment of the day.”

Active knowledge can obscure insight. This is, Konnikova says, why Holmes sometimes seems to be taking a flippant approach to solving problems. He naps. He plays the violin. In “The Red Headed-League,” he describes a  “three-pipe problem” and begs Watson for fifty minutes of silence. He provides space for his mind to work.

“For Holmes, it’s a pipe, but for us, it could be watching Netflix or reading a book,” says Konnikova. “When you disengage from the problems you’re facing, your mind is still working on them. Plenty of studies show that if you’re in an emotionally ‘hot’ situation, one of the ways you can help yourself through, and make decisions, and regain emotional equilibrium is to do a distancing exercise, where you quite literally picture yourself outside of the situation…that gives you perspective so you’re not the hot emotional actor, but someone who has all their cognitive capacities and can actually evaluate it from a cooler, more rational perspective. And that’s the Holmesian approach, in almost all things.”

The biggest point here? Your emotions — specifically anxiety — can lead you to make less-than-informed decisions if you don’t find a way to take a break from that stress. Taking a break isn’t irresponsible, it’s the prelude to thoughtfulness. And keeping a cooler head is not evidence of apathy, but of a desire to prevail. But you don’t need to overdo it.

The news isn’t necessary. Netflix might help. Pacing is good. Music is good. Staring out the window is perhaps best of all.

“I fucking can’t stand some of these memes out there encouraging people to finish their novels or whatever while in quarantine,” Konnikova says. “This is not an easy thing. A lot of people might read this and say ‘are you fucking kidding me, people are dying.’ And that is true, which is why we need to take this seriously. But being detached emotionally and acting emphatically are not mutually exclusive.”

After a long pause, what to do next may seem elementary. All that’s left is to do it. 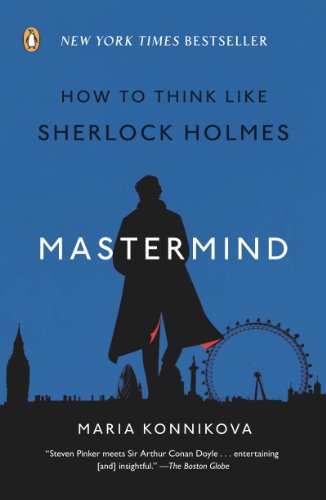 Brush up on your brain skills.

ADVERTISEMENT
ADVERTISEMENT
More From Health & Science
Pregnancy What to Make of the Dreaded Faint Line on a Pregnancy Test
Nutrition 6 Myths About Protein Shakes for Kids, According to Nutritionists
Sleep 12 Ways to Fall Asleep Faster
Fitness Get Fit in 60-Second Intervals With This Intense Bodyweight Workout
Health & Science Indica vs Sativa and Beyond: The Best Types of Weed for Parents
Fitness Why Men Can’t Beat the Viral "Center of Gravity" TikTok Challenge