Do Babies Have Nightmares? Science Has An Answer

A dude with a freaky knife glove isn’t quite as scary as being jolted from sleep at 3:00 AM by a screaming infant, but might he have something to do with it? Do babies have nightmares? While your little sleepy-puss probably isn’t dreaming of a badly burned janitor (unless your favorite bedtime story is Count to 10 And Never Sleep Again With Freddy, in which case knock it off), research has shown that, yes, babies can have really bad dreams.

Recognizing nightmares in babies isn’t easy. It’s not like they can sit up and be all, “Man, Pops, I had this freaky dream I was in daycare but, like, totally naked.” That said, nightmares are known to be a normal way the brain processes stress during deep REM sleep, so Junior will have some restless nights whether or not you put them to bed to Automatic for the People. Sorry, kid, but everybody hurts. (Okay, that’s enough.) 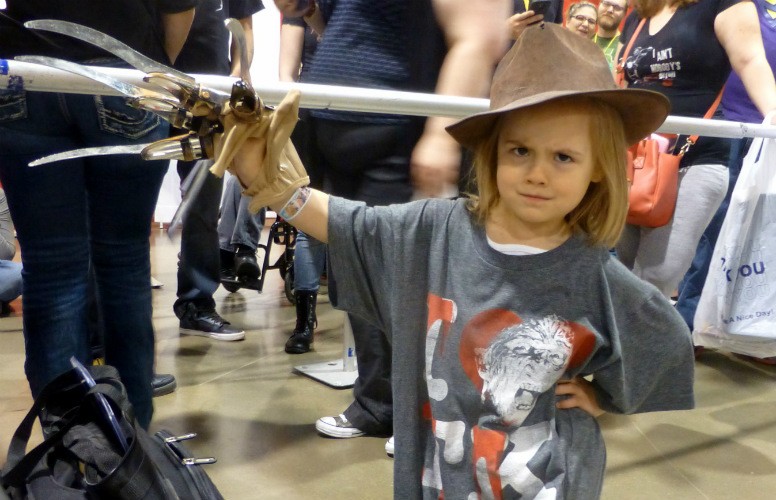 No one knows how complex or detailed babies’ nightmares can get, but it’s important not to confuse any freaked-out sleep disturbances with what are known as night terrors. Like nightmares, terrors can be accompanied by crying and screaming, but can also include fighting off parents and in extreme cases even getting out of bed and fleeing.

Night terrors are products of a natural transition from light to deep sleep states, so they’re likelier to occur early in the evening. They are explained as the product of a body trying to wake, fighting with a brain trying to shut down. The good news is your child isn’t conscious of what’s going on and won’t remember anything odd happened at all, even if they appear to be awake, glassy eyed, and creepy looking. You can probably soothe them without waking them up; the important thing is letting them get back to sleep without disturbing them. There’ll be plenty of time to explain dreams — and embarrass them with baby night terror stories — when they’re older.

By contrast, nightmares often happen in the small hours of the morning when your kid (and their dad, ideally) is lost in dreamland. Nightmares will definitely wake your kid (and, again, you), but since they happen so early in the morning it may be tougher getting them back to sleep, if you can at all.

Happily, you can fight nightmares by avoiding stressful situations during the day and providing a strictly followed, screen-free pre-bed evening routine (one bedroom sweep with a monster-hunting app is okay). Also, don’t fret over reports that excessive nightmares in kids could lead to sociopathy in later childhood. Experts say that’s all likely overblown. However, if the kid starts drawing pictures of guys in striped sweaters with sharp claws, maybe seek a professional. Or a priest.

Sleep Training
ADVERTISEMENT
ADVERTISEMENT
More From Health & Science
Pregnancy What to Make of the Dreaded Faint Line on a Pregnancy Test
Nutrition 6 Myths About Protein Shakes for Kids, According to Nutritionists
Sleep 12 Ways to Fall Asleep Faster
Fitness Get Fit in 60-Second Intervals With This Intense Bodyweight Workout
Health & Science Indica vs Sativa and Beyond: The Best Types of Weed for Parents
Fitness Why Men Can’t Beat the Viral "Center of Gravity" TikTok Challenge