We know that few kids can resist the springy siren call of a trampoline. As a parent, you’re torn: You know that child obesity rates are trending upwards and risky play can be good for development. You also know that during a snowstorm or heat wave, an hour or so of indoor jumping can make the difference between a smooth bedtime routine (tired kid equals happy kid, after all) or a painfully prolonged one.

On the flip side, there is the potential for injuries, especially to areas like the head, neck and spine. In its statement on trampolines, the American Academy of Pediatrics doesn’t equivocate, saying that “cervical spine injuries often occur with falls off the trampoline or with attempts at somersaults or flips” and “the home use of trampolines is strongly discouraged.”

But since these bouncy kid magnets are only gaining in popularity—some estimates show 500,000 sold in the U.S. annually—Fatherly asked Dr. Benjamin D. Hoffman, the chair of the American Academy of Pediatrics’ Committee on Injury, Violence and Poison Prevention, for some pointers on how to keep kids safe while playing on a trampoline.

Be watchful. If your kid is bouncing, don’t disappear into the kitchen to start dinner (that’s what PBS Kids on the iPad is for!). “They can be great for exercise but supervision is key— the nets around the side [of outdoor trampolines] can lull parents into a false sense of security,” says Hoffman. He adds that keeping an eye out will help prevent daredevils from testing out the moves they learned in gymnastics class. “With tricks on trampolines, the worst-case scenario is head, neck and spinal cord injuries, so make sure the child is always appropriately supervised and is being smart about it,” he adds.

Forbid multiple jumpers. This is especially important if you’re mixing older and younger children (and by the way, nearly all trampoline companies say to jump one person at a time, period). “With a larger person and a smaller person, if they hit just right, the smaller person can be jettisoned with a lot of force,” says Hoffman. Of course, during the frenzy of a playdate, this can be hard to put into practice. If your kid and his same-sized friend insist on jumping together, make sure the trampoline has plenty of space for them to spread out and that you’re watching them carefully.

Keep it grounded. If you have an outdoor trampoline, use stakes (like these) to secure it to the ground to prevent wind from uprooting it, which we shouldn’t need to tell you would be really horrible news if kids were inside. Some trampolines include stakes, but with others they must be purchased separately.

Aim for a soft landing. As Hoffman says, “The biggest problem is when someone falls off the trampoline onto the ground—you want it to be on a softer surface.” A padded mat around the trampoline will help cushion falls and absorb noise if you’re using it indoors. For outdoor trampolines, make sure the entrance is secured (usually by a zipper)—it’s easy for excited kids to forget that step.

Inspect it regularly. Check your gear for damage such as fabric tears or broken springs frequently. Most companies offer replacement parts, sometimes free of charge.

Here’s a round-up of indoor and outdoor trampolines that will work well for younger and older kids and, in some cases, their jumpy parents. 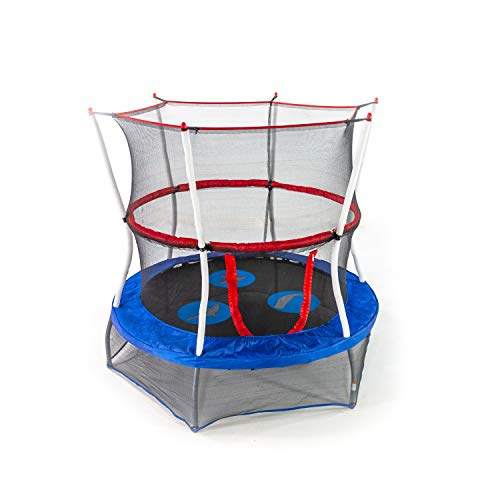 This Skywalker trampoline has a 360-degree padded handle bar that helps stabilize kids as they jump, plus the enclosure net is sewn directly onto the jump mat, so there are no gaps.

Pros: Great for toddlers and younger jumpers, this mini Skywalker trampoline works both indoors and outdoors, in covered areas. And there are no gaps, so they won’t get stuck.

Cons: Make sure you use this on a flat surface so the frame retains its shape. 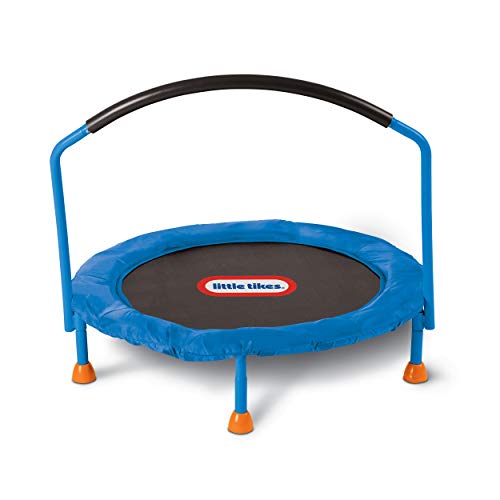 This three-foot–wide trampoline has a maximum weight limit of 55 pounds and gets it's bounce from elastic webbing, not springs, so there's less risk of little toes getting nabbed by metal.

Cons: Some parents complained that the legs are wobbly and that the foam padding on the handle isn’t durable, especially because younger kids were tempted to gnaw on it (one user wrapped electrical tape around it to secure it). 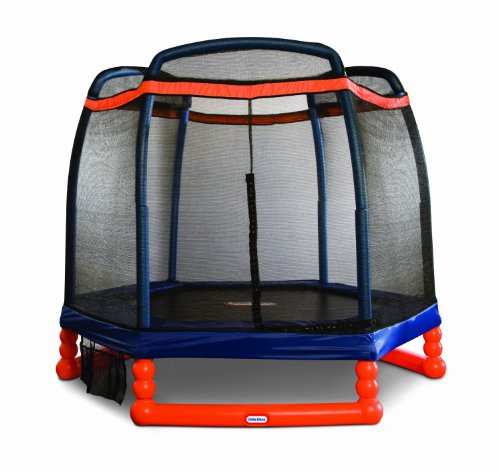 This Little Tikes kids trampoline has a frame that is made of durable blow-molded plastic and steel. The safety enclosure is made of PE netting and supported by heavy-duty steel poles. It has a weight limit of 105 pounds.

Pros: This trampoline is great for older kids, and can be used outdoors. It’s suitable for kids three to 10 years old.  The jumping area is 7.69  feet in diameter. 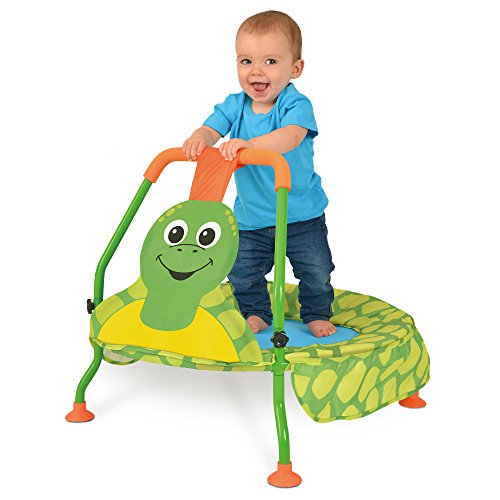 This is a solid starter trampoline for your toddler, to be used under supervision only.

Pros: This mini trampoline is meant for kids one and older. It’s got a cute design, a sturdy handle, and supports a maximum weight of 44 pounds.

Cons: The quality can be iffy, so pay attention to rips and tears. 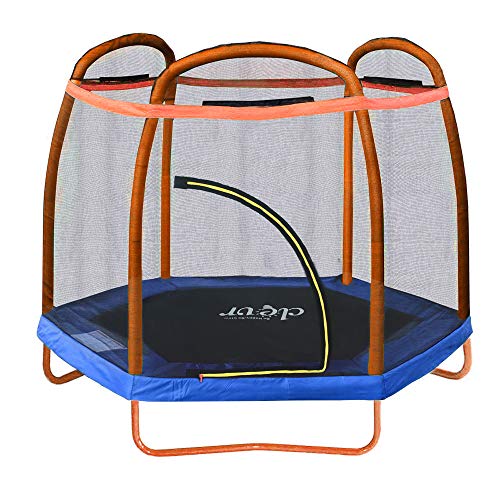 Older jumpers can reach new heights in the Crosslinks seven foot trampoline, which has a heavy duty steel frame and base, as well as water-proof protective padding.

Pros: This trampoline has a net for added safety, and padded poles to keep jumpers from slamming into anything hard or sharp. It’s cushioned and sturdy.

Cons: It takes roughly 60 minutes to put together, which is pretty much the only con. 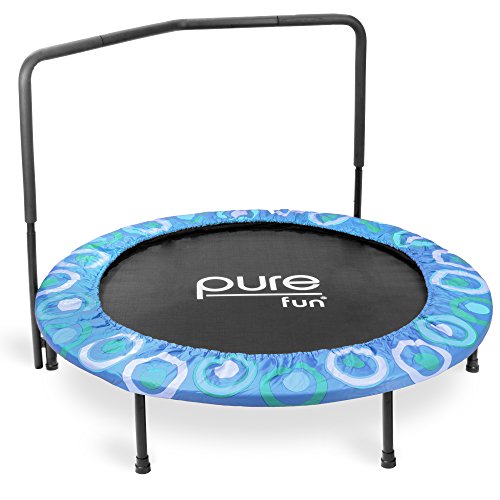 This simple four-foot–wide trampoline has a maximum weight limit of 100 pounds.

Pros: It’s fairly affordable, has actual springs (which some old-school trampoline fans say are a must) and gets praise for its durability. The safety bar is also removable, which you may want to do as your child gets more comfortable jumping.

Cons: Some reviewers say that due to those springs, the trampoline is a bit of a pain to assemble, and that the job may require two people. Others complain that the cover is tough to get on and doesn’t stay in place well. 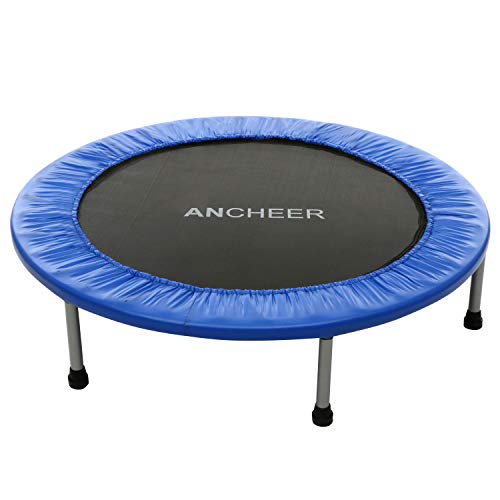 Active families will love this option: Grown-ups can take a turn if they fall under the 220-pound weight limit. It's also foldable, so you can stash it away when you're not using it. (Note that this version folds in half once, but the company also makes a 38-inch model that folds twice to an even smaller size.)

Pros: Users report that it’s quiet and sturdily constructed, and the foldable factor means you can even stash it the trunk of your car if you’re traveling.

Cons: There’s no safety bar, and the company recommends it for kids ages 10 and up only, although some families do allow their younger children to play on it as well. 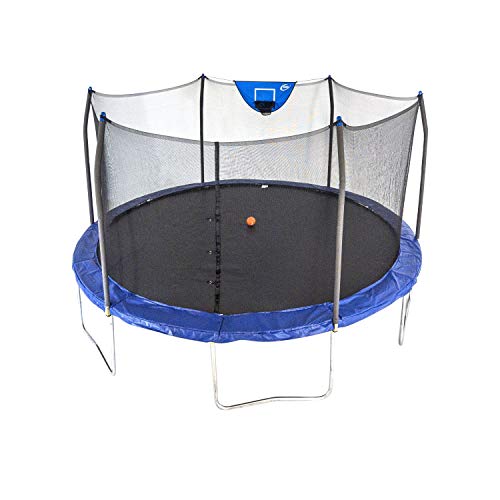 This generously-sized backyard accessory, which has a 200-pound weight limit, also comes with its own basketball hoop, which can be attached on either the inside or the outside (to give kids waiting their turn something to do). The company suggests that only kids six and older use it.

Pros: Skywalker uses what they call a “no gap” design, which means that the enclosure net is attached to the jumping surface at every spring, so there are no gaping holes to navigate. The poles themselves are also padded, and the springs sit outside the net so kids won’t risk stepping on them. Although it’s not cheap, it’s a good value for a trampoline this size.

Cons: The weight limit is a bit low for a model this size. Many people also said the directions about how to align the entrance opening were difficult to understand at first, requiring them to spend additional time redoing it. 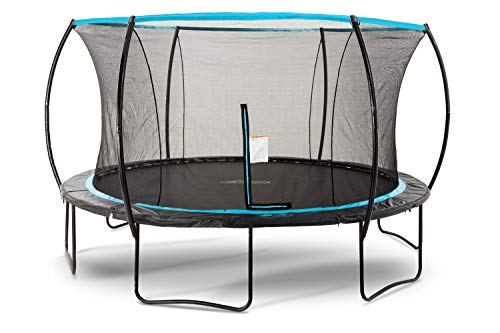 This classic backyard trampoline has a weight limit of 220 pounds and like the Skywalker, it's also recommended for children six and older.

Pros: As with the SkyWalker, the springs sit outside the enclosure, protecting jumpers’ feet. Reviewers loved the sleek look of the black poles and also praised the installation process as being fairly straightforward and easy.

Cons: Some complained that mesh netting wasn’t durable enough, which given the price, it should be. Despite the mostly easy installation process, some reviewers felt that the task of stitching the net to the spring loops was slow and cumbersome, although one person used a knitting needle to make it go more quickly.

Oops! Something went wrong. Please contact support@fatherly.com.
Thank you for subscribing
Give us a little more information and we'll give you a lot more relevant content
Your child's birthday or due date
Add A Child
Remove A Child
I don't have kids
Thanks For Subscribing!
Oops! Something went wrong. Please contact support@fatherly.com.
Commerce trampoline Trampolines
ADVERTISEMENT
ADVERTISEMENT
More From Gear
Outdoors How to Build the Best Bug-Out Bag, Emergency Kit, or Go-Bag For Your Family
Home Dyson's Newest $750 Air Purifier Actually Destroys Formaldehyde
Gear Kids Are Bad at Brushing Their Teeth. This Philips Sonic Toothbrush Helps.
Gear The Best President's Day Sales of 2020
Style Filson's Popeye Collab Features the Best New Men's Hoodie In a Long Time
Gear This $30 Toddler Alarm Clock Gave Us Back Our Mornings