The device, basically a phone and tablet lockbox that stores and charges devices and monitors screen time use, is a godsend.

When children become tablet or cellphone users, two huge issues for parents appear. The first is how to manage their kid’s screen time to keep them from becoming digital zombies. But that’s not the only concern for parents. The second major concern is devices getting lost or destroyed because kids are, well, kids. With multiple children and/or devices in the home, cords can become a serious consideration as well. In other words, there is far more to manage than simply the time the kid is interacting with a screen.

I’d been relying on ad hoc solutions until I was introduced to the TechDen, an app-enabled gadget lockbox that charges my kids devices while also managing and monitoring how often they use them. It’s been so successful that, after a month, tablet use in my home has dropped significantly and complaints about devices being charged have ceased completely. 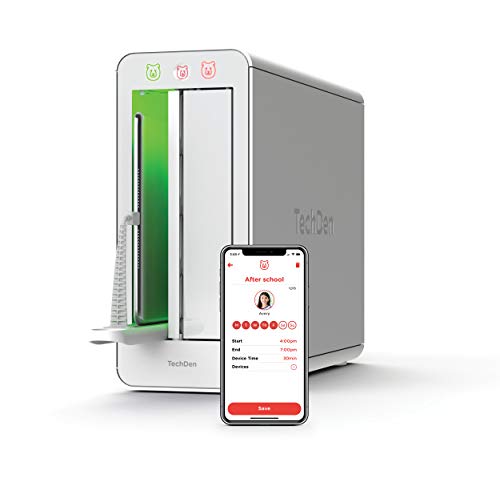 You put your device it goes in the Den, where it’s securely stored, charging and inaccessible to your kids.

The Tech Den looks, upon arrival, like an old school computer tower. It needs to be big because it offers two distinct storage compartments large enough to hide away phones or full-size tablets. Inside the Tech Den are two sliding shelves with attached charging cords, one for each compartment. Tablets are placed on these shelves, jacked in and slid inside the den. The push of a button shuts the tech den doors which hide the devices as they charge.

The Tech Den would simply be a bulky charging station if it weren’t for the fact that parents can pair the Den with its associated phone app and control when the doors can and cannot be opened. Through the app, parents can schedule a time when the Den can be opened and the tablets retrieved. At the end of that time, parents are notified if the tablets have not been returned to the den. Parents can set different schedules for different days and add or take away time as necessary. They can even add a goal for the number of times the device is returned to the den on time in order to set up a reward system for thoughtful screen use.

Despite the fact that my kids are screen junkies, they seemed to love the Den because it’s actually pretty neat in a fun futuristic way. When you press the button on the front of the den, the doors flip open with a satisfying click and internal LEDs illuminate the interior with different colors depending on if a tablet is docked or not. It’s a slick bit of futuristic fun and keeps the den from feeling domineering and vault-like.

That’s one of the reasons I think the Tech Den worked so well with my kids. But there are other reasons too. For one, they understand that when the tablet is in the Den, it’s charging. And because two devices can charge at the same the two no longer fight over a power cord when one is inevitably lost or out of reach. When the tablet is removed it’s fully juiced and ready to go.

Also, when the tablets are in the den, they can’t be seen. There is a bit of truth in the idea of out-of-sight-out-of-mind. Instead of picking up the tablet in a moment of boredom, they have had to ask if the Tech Den can be opened. This allows me to redirect them to another activity.

Of course, the Tech Den isn’t perfect. It can be a little persnickety if tablets aren’t put in just right and there can be issues scheduling check out times if you happen to have picked a larger font size on your phone. It also requires a fairly big space. Putting the Tech Den in a home office or kitchen would be ideal. It might simply take up too much space otherwise.

But those are minor complaints compared to the functionality of the Tech Den, which truly has made managing my kid’s screen time (and all the ephemera that comes with it) pretty damn simple.

ADVERTISEMENT
ADVERTISEMENT
More From Gear
Gear This Stunning Superhero Cape Turns Any Kid Into an Avenger
Gear The Best Hazy IPAs to Add to Your Cooler This Summer
Gear The Beloved, Notorious Montessori Bed: What Parents Should Know
Gear This Felt Building Kit Is One Truly Sensational STEM Toy
Home How to Unclog Any Drain, From the Kitchen Sink to the John
Gear Skin Care for Men: The Best Subscriptions for Everyone From Rookies to Aficionados