The Best Cooler On Wheels is the Yeti Tundra Cooler

Yeti, the Escalade of coolers, launched its latest model, the Tundra, just in time for Father’s Day. Yeti calls it “the toughest cooler on two wheels,” and the brand isn’t lying. Hard coolers like the Yeti are big, heavy, durable monsters that keep your drinks chilled for days.

The Yeti Tundra cooler holds 45 cans of beer and 55 pounds of ice. Empty, it weighs 37 pounds, so you get a definite workout toting it around.

I took the Yeti cooler to a volleyball tournament in New Jersey, out in the field. The weather was about 80 degrees and sunny. I filled the cooler with a couple of bags of ice, and a 24 pack of beer, plus a couple of water bottles. It was in and out of the sun for eight hours. In that time, the ice didn’t melt and the drinks were ice-cold. 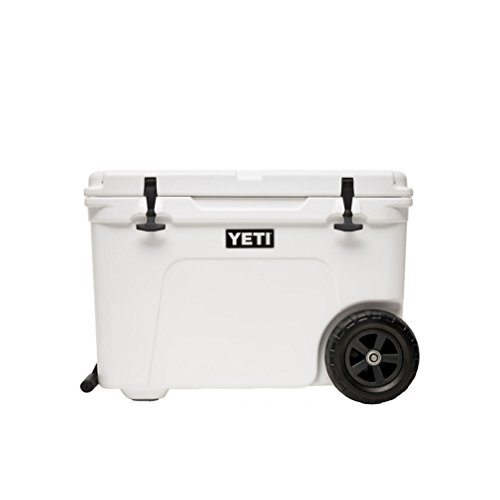 In terms of coolers, the Yeti is best in class in keeping stuff cold. Ice almost doesn't melt in it.

The Tundra has a welded aluminum arm with comfortable grips. Basically, this means that the handle on it is nice and rugged and durable. I feel like I can throw the cooler around and it wouldn’t break. It also has side handles so you can pick it up, which is convenient. But the way the handle is designed, it hits the back of your leg when you’re walking, so that’s a slight pain in the ass.

The bottom line, this Yeti cooler keeps shit cold. As in, brain-freezingly cold. But transporting the thing is a headache. The wheels help and roll really well, but it’s heavy. Really, really heavy. Getting it in and out of the car is a hassle. But it’s a hassle I can overlook because there’s nothing better than a frigid brew on a hot day.