The Fiercest Dinosaur Toys for Kids of All Ages

They are mighty. Hear them roar.

Chances are good that you barely remember what you had for dinner last night, or who backstabbed whom on the most recent episode of Succession. Your dinosaur-obsessed child, on the other hand, can easily rattle off the difference between the diplodocus and the mamenchisaurus, and tell you with supreme confidence that of course the velociraptor was a feathered carnivore with enlarged claws. It’s no surprise, then, that these same kids are obsessed with cool, big dinosaur toys and figures. The best of the best are ferocious, powerful, and imaginative, capturing the imaginations of children across most age groups.

“Dinosaurs are exciting and powerful but relatable,” says education professor Keith Sawyer, who studies and teaches about creativity at the University of North Carolina at Chapel Hill. “In the case of dinosaurs, both boys and girls play with them. It’s not gendered. That’s a really good thing.”

Of course, kids’ love for dinosaurs is ubiquitous, meaning that it can be hard to sort through the options and find the best dinosaur toys based on your kid’s interest. It’s especially difficult considering you probably aren’t an expert on prehistoric animals yourself. When choosing the best dinosaur toys, use your common sense: Pick the right toy for your child’s level of cognitive development. Make sure the toy is neither too challenging or too simplistic, or else kids will be bored or overwhelmed. And lean in to your kid’s preferences: If he loves puzzles, get him one; if she’s into action figures, go with those. Looking for the best dinosaur books for kids? We’ve listed our favorites here on a separate page.

The Best Dinosaur Toys for Toddlers and Preschoolers 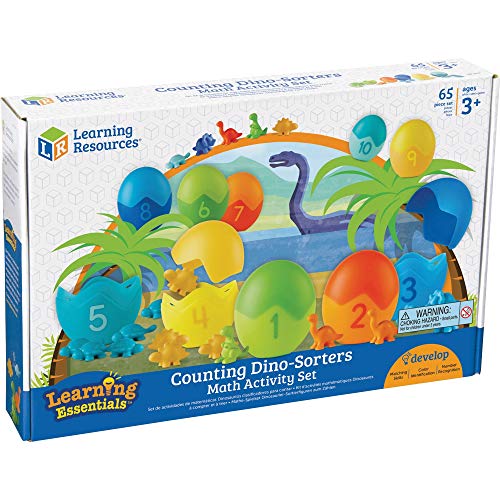 Kids learn about numbers and colors as they open each egg; each one reveals dinosaur-shaped counters that match the color and number of the egg they live within. 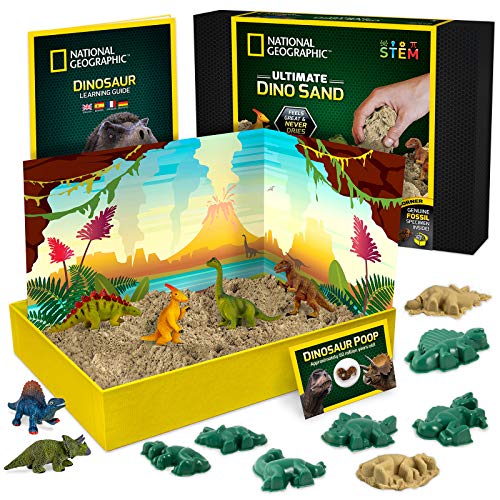 Not only do kids get the sensory benefits of playing with this kinetic sand, which sticks to itself, but the creative joys of dino-shaped molds to turn the sand into dinosaurs. And also, dinosaur play figures to round things out. 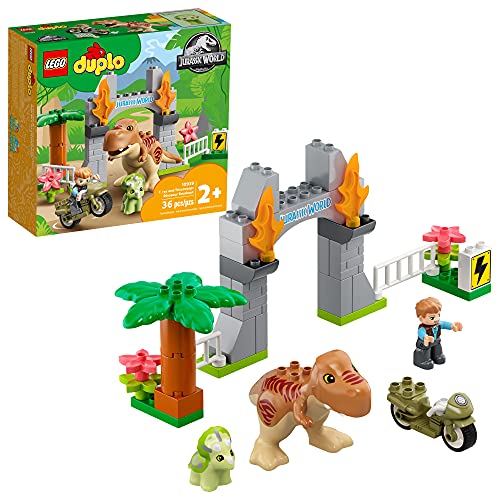 Preschoolers give their problem-solving skills a workout as they put together these just-hard-enough set, which features with open-and-close fencing, a large T. rex with an opening mouth, a baby triceratops and a dinosaur trainer. 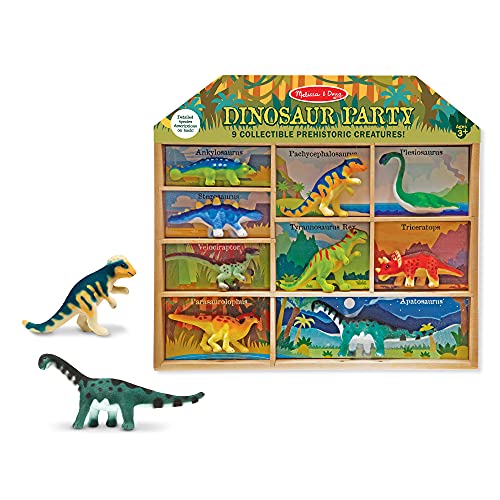 Sometimes the simplest toys are the best. These models are covered in felt, and they range in species from the well-known (T. Rex and Velociraptor) to the obscure (Pachycephalosaurus and Ankylosaurus). 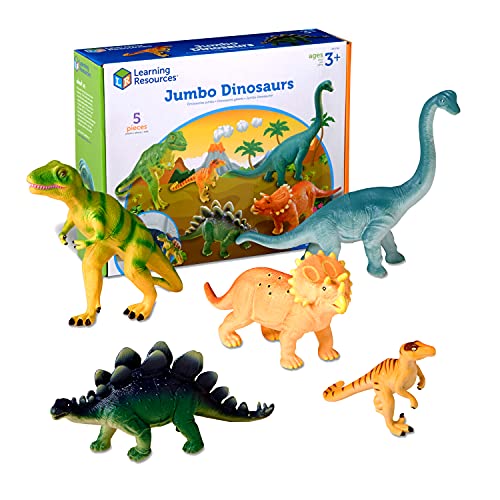 This set of five dinos, including the brachiosaurus and stegosaurus, comes with a guide filled with facts about each specific creature. The colors and detailing are truly stellar. 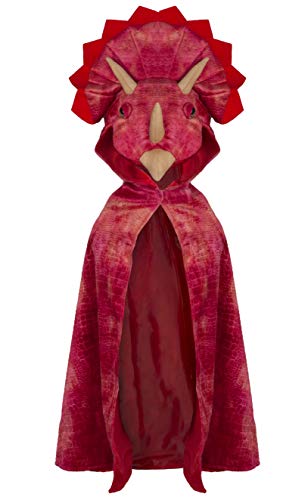 A gorgeous cape that's perfect for dress-up and pretend play, and ideal for this age group. 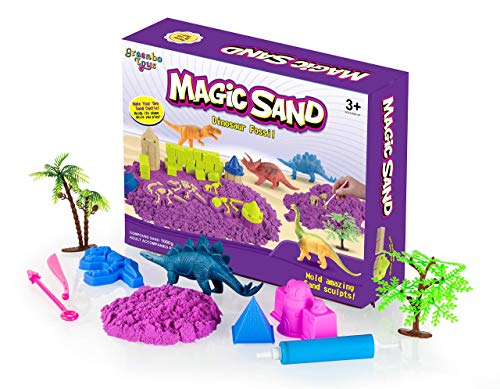 Kids use the sand to mold an environment for their dinosaurs. And then let them roam. The set includes 15 sand molds, four dinosaur molds, five digging tools, and four mini dinosaurs. It's a wonderful sensory toy set, too. 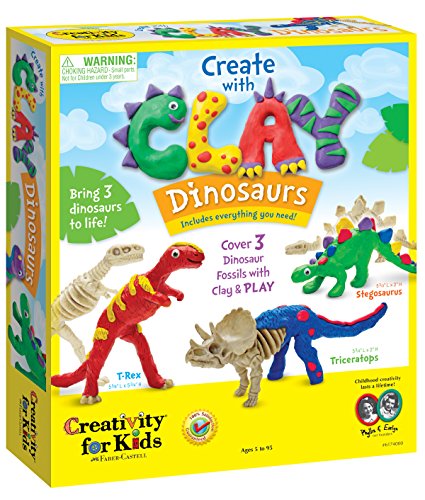 A set that blends the creativity of clay with the wonders of paleontology: The set includes three plastic dinosaur skeletons, plus five different colors of clay so kids can create a blue and purple T. rex. 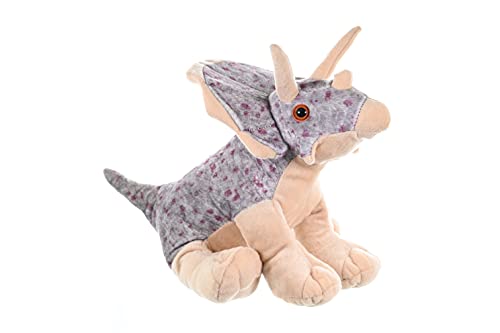 Is it us, or is this 12 inch dino all cute and inquisitive and stuff? It has three horns and wide eyes and we basically love this thing. 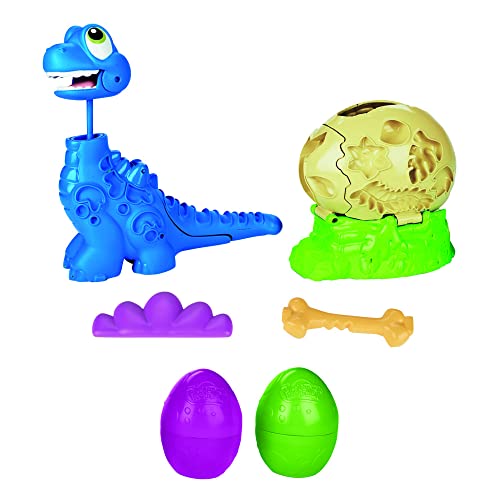 First, this baby dino hatches out of its egg. Magic. And then, when kids press the tail, its neck will grow longer when it's filled with Play-Doh. 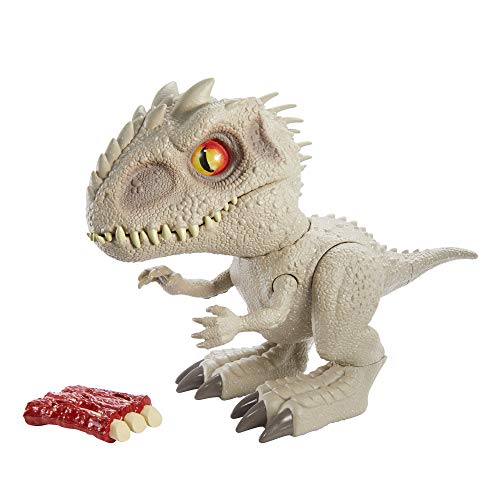 Move her tail, and her head moves. Move it some more, and the body moves. And she chomps down. 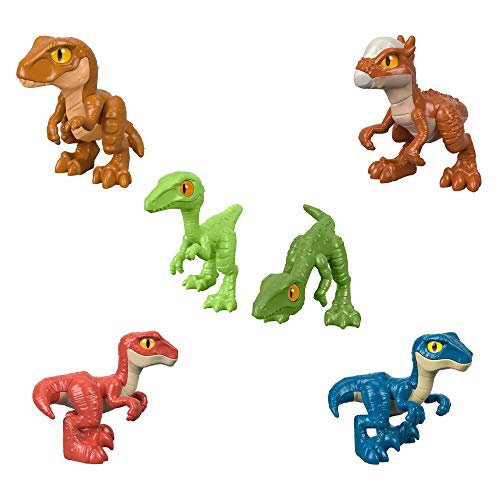 What cooler than dinosaurs? Baby dinosaurs, of course. This set includes six of them, with movable arms and legs. 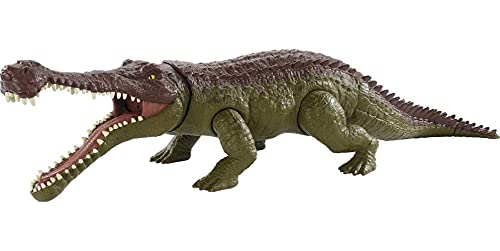 This is no 'gator, folks. This dino comes alive when kids move its tail, leading its body to twist around. And when they push the button on the tail, the jaws chomp. 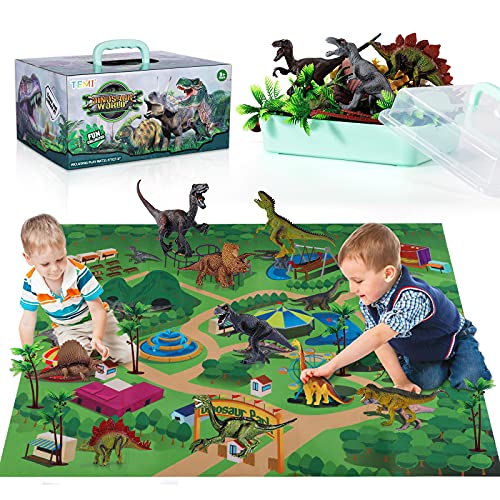 Little kids can create their very own Jurassic World with this complete set of nine dinosaur action figures, as well as a colorful dino mat so they can hone their exploration skills. Kids get all the big guys, including the Tyrannosaurus Rex, Giganotosaurus, Therizinosaurus, Stegosaurus, Triceratops, Velociraptor, Acrocanthosaurus and Brachiosaurus.. 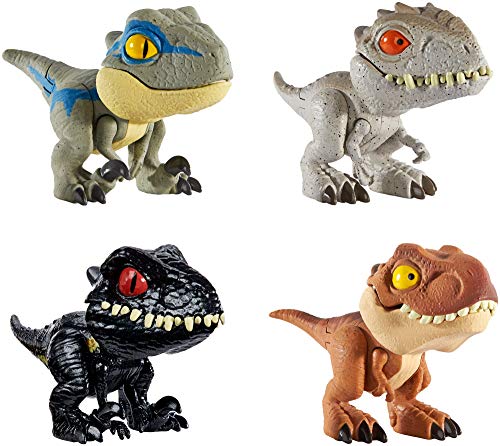 These adorable little dinos are based on those in the Jurassic World franchise, and have mouths that 'snap' gently onto hands, clothes, and bags.

The Best Dinosaur Toys for 5-Year-Olds 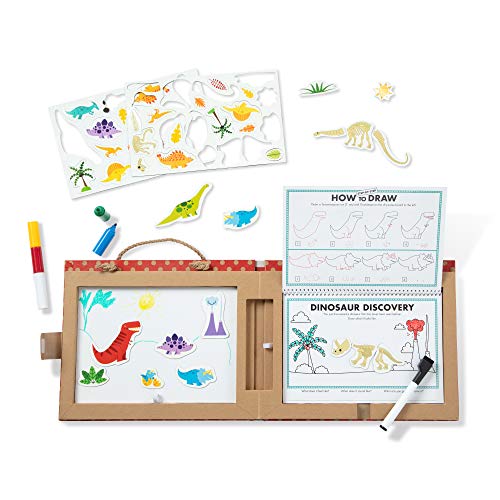 This kit comes with a built-in magnetic dry erase board, 13-page spiral-bound dry-erase activity book, and 41 magnets, plus instructions on how to draw all manners of dinosaurs. Over and over and over again. 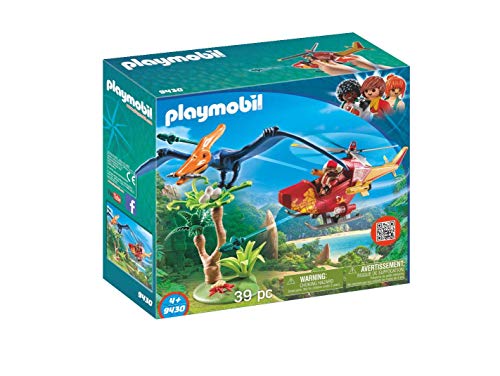 This dinosaur toy set lets explorers check out the island from above, while monitoring activity in the chopper. The pterodactyl is soaring around nearby. In addition to the dino, the set includes a dart gun, a tree landscape, and eggs. Plus the copter of course. 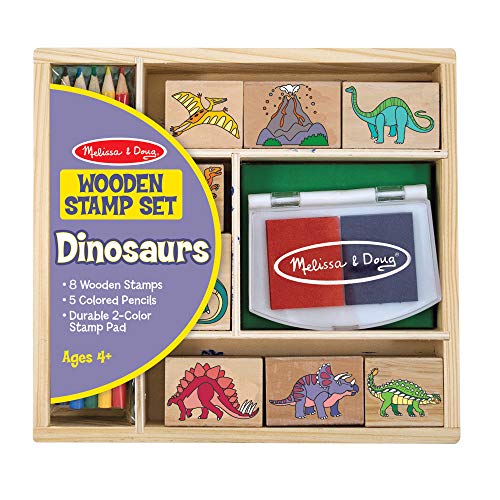 Kids work on their hand-eye coordination as they use these eight dinosaur-themed stamps and five colored pencils to leave a prehistoric mark. 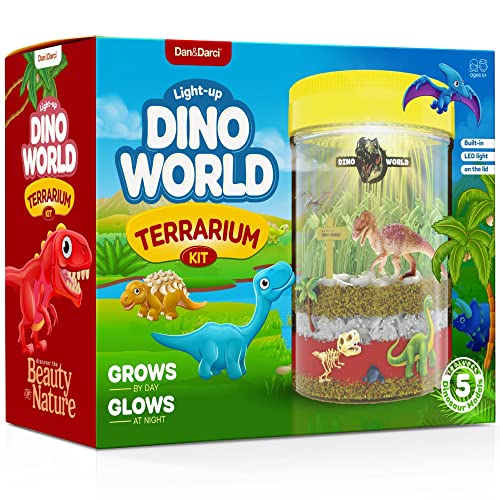 How's this for cool: A dinosaur terrarium that glows at night thanks to an LED light under the lid.Kids get the light-up jar lid, micro-USB charging cable, vermiculite soil, red sand, river rocks, wheatgrass and chia seeds, and five dinosaurs. 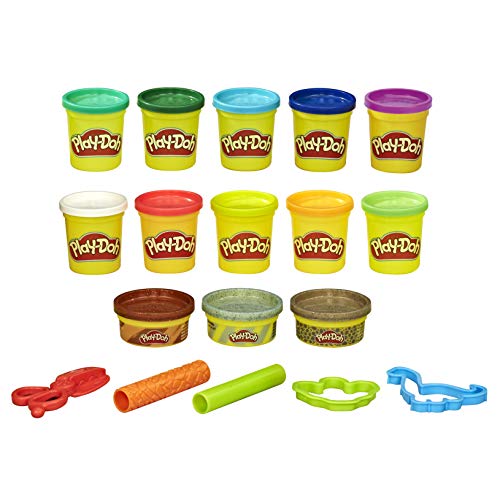 Kids get 10 cans of Play-Doh, and brontosaurus and dinosaur foot print cutters so they can create their own prehistoric world.

The Best Dinosaur Toys for 6-Year-Olds

You get three dinos in one thanks to this versatile and easy 174 piece brick set.

Perfect for Lego fiends and dino-nerds alike, the Carnotaurus kit includes three minifigures, two vehicles, and a big 'ol dinosaur. It's everything your child will need to tell his or her own stories over the dinner table in excruciating detail. 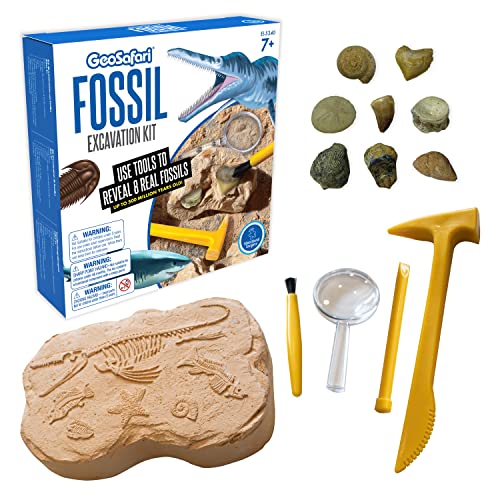 First, kids use the rock hammer and chisel to chip away at a hardened sand block and excavate the fossils hidden inside each rock. And once they're brushed clean, kids get up close and personal with them under the included magnifying glass. 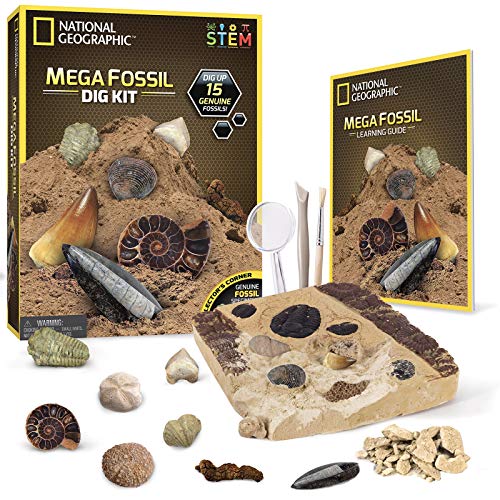 This kit is a celebration of the human heroes of the dinosaur world, the scientists who find fossils and study them. This dig brick comes with tools similar to those used by real paleontologists on real fossil digs. Once kids finish excavating, the full-color booklet that's also included is packed with educational information. 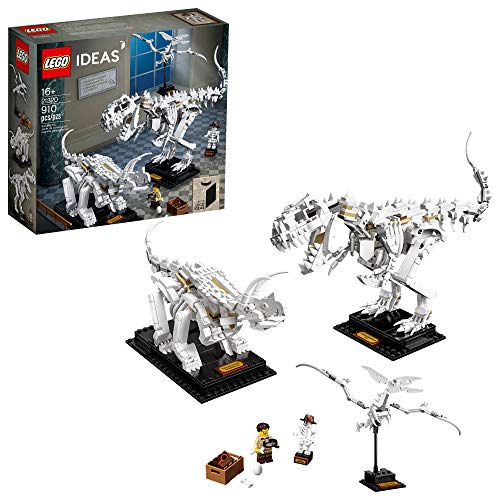 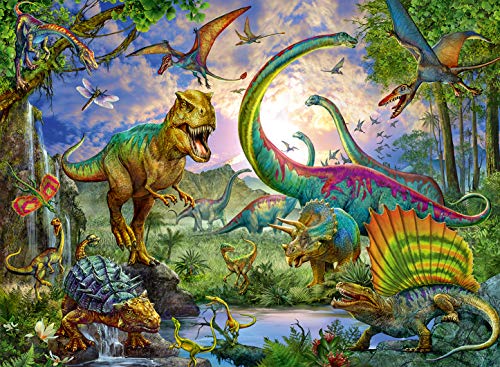 Realm of The Giants Puzzle by Ravensburger

A breathtaking 200-piece jigsaw puzzle for third graders that pays proper homage to the extinct giants.