The Best Air Purifiers So You Can Breathe Easier at Home

These models that are more than capable of capturing dust, pollen, dander, and any other pesky particles.

There are a million reasons parents are eternally on the hunt for the best air purifier or home air filter. A million microscopic reasons, that is, including pollen, smoke, and dust particles, dander, viruses, and other contaminants, which top-rated air purifiers and air filters quietly remove to improve indoor air quality, making it possible for you and your kids breathe easier.

Whether you’re looking for the best air purifier for pets, or the best air filter for allergies, the market is teeming with options. New purifiers are quieter, more beautiful and more effective than even what was on the market a decade ago.

According to Consumer Reports, you should keep a few things in mind before buying an purifier. First of all, see how much energy they use, to keep your bills on the lower side. Check to see how often air filters need to be replaced, and how much replacement filters cost. Some can run close to $100. If you’re averse to noise, see how quietly it operates on the quietest setting. For some, even the most silent air purifiers are still too loud. And make sure it’s as user-friendly as possible, letting you know real-time air quality levels in your home, allowing you to control it via an app, and making sure you’re aware when the filter needs to be replaced.

Here are the best models of varying price that are more than capable of eradicating dust, pollen, dander, and any other pesky particles. 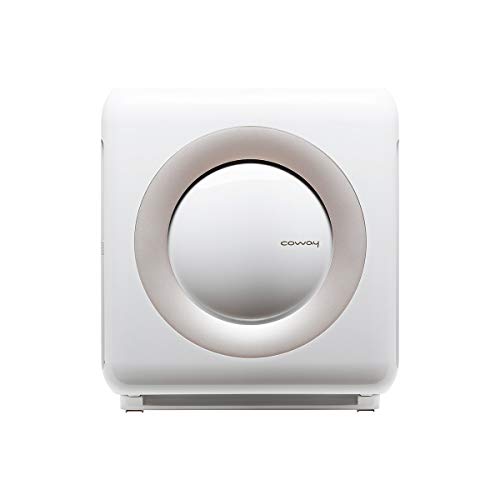 This highly-rated HEPA air purifier is great for mid-size rooms and pretty much the best pick for parents, in terms of effectiveness and cost. Instead of having to buy a separate air quality monitor, just get this air purifier. It monitors indoor air quality in real time and has LED lights that let you know how clean, or dirty, your air is. You can choose between four fan speeds. Plus, it tells you when it's time to wash or replace the filter. 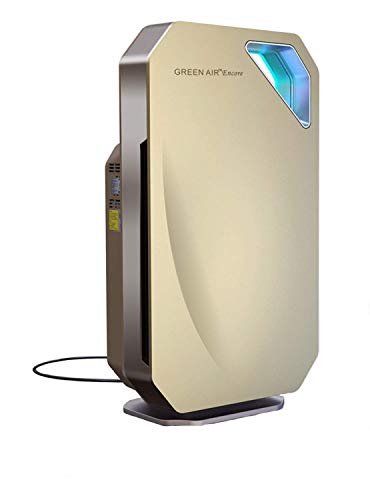 This non-ozone based filter handles spaces up to 1000 square feet easily and is great for homes with open kitchens. Not only is this the best-looking air purifier in the bunch, but it's also among the quietest. It used carbon-based filters to suck up nasty odors, like burned popcorn. Its HEPA filter captures up to 99.97 percent of airborne particles. It's slim and modern, has a quality color-changing light ring, and an automatic air filter change indicator.

Dyson's small air purifier and fan has a fully-sealed HEPA filter and activated carbon filter that captures 99. 97 degree of allergens and pollutants, including pollen, bacteria, and pet dander. This air purifier from Dyson does its job, and does it well. Note that it's a personal air purifier, meaning it's not meant for huge rooms or large spaces. Its built-in LCD display shows airflow level and filter life; the filter generally lasts about a year. 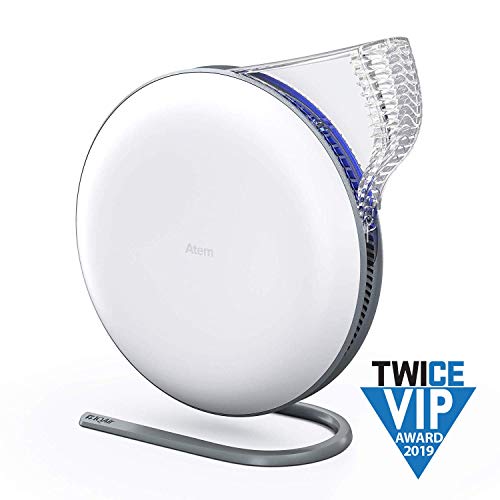 The IQAir purifier is perfect for your nightstand, to help you breathe better while you sleep. This is a beast of an air purifier, only you'd never know by looking at it. The IQAir's HyperHEPA filtration technology filters air down to the 0.003 micron level. That's smaller than the size of most viruses,. Really. You can easily control it from the Atem app, and its HyperHEPA filtration delivers up to 99 percent purified air to your personal breathing zone around your bed. It comes in either black or white. Just imagine. No more sneezing or coughing while you sleep. Heaven. 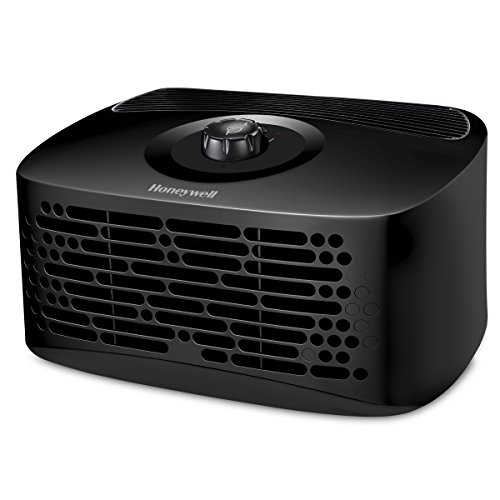 If you're short on space, you need this Honeywell tabletop air purifier, which is meant for small rooms like your kid's room. This Honeywell air purifier can capture 99.97 percent of microscopic allergens, 0.3 microns and larger from the air that passes through the filter; plus it has three air cleaning levels and a filter replacement indicator. One filter lasts three months. 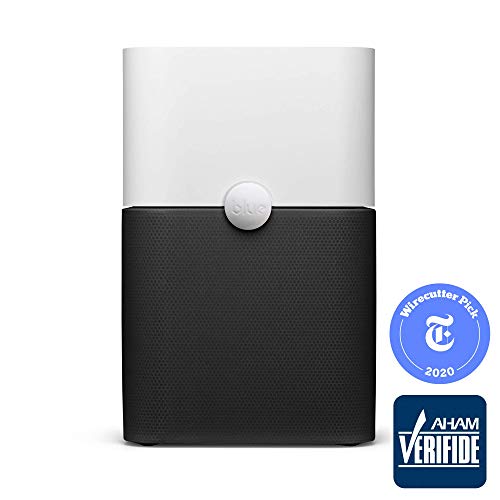 This air purifier, ideal for large rooms, has an activated carbon filter and a three-part filtration system captures 99 percent of common airborne pollutants such as allergens, odors, smoke, mold spores, dust mites and pet dander. If you live with a smoker, or know a smoker, or are a smoker, get this air purifier. It zaps 99 percent of common allergens, has a washable filter, and removes gross odors caused by smoke, pets, cooking, and dirty laundry. 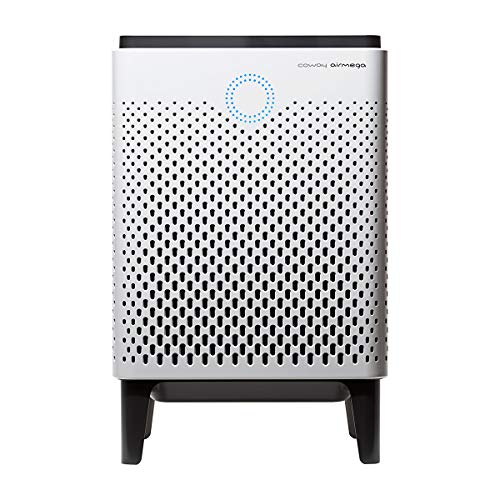 Get the powerhouse Airmega 300 air purifier if you live in a big house, with big rooms, because this one is meant for large spaces. The Airmega 300 the Smarter Air Purifier can easily handle rooms up to 1,256 square feet, cleaning the air twice in one hour. It has a combined activated carbon and True HEPA filter that like its brethren says it captures and reduces up to 99.97 percent of particles 0.3 microns in the air (comparable to the Dyson), including pollen, pollutants and other allergens. The Airmega has a built-in pollution sensor to let you know about indoor air quality in real-time, courtesy of an LED ring. It has five fan speeds. 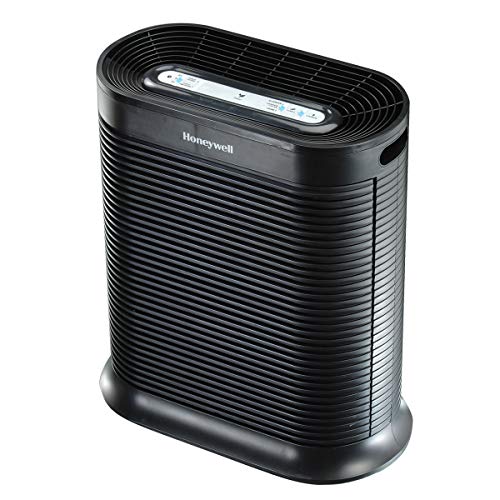 Is it going to win a beauty contest? No, it's not. Does this Honeywell air purifier, ideal for large rooms, capture up to 99.97 percent of airborne particles as small as 0.3 microns? Yes, oh yes, it does. Tailor-made for sizable rooms, the Honeywell True HEPA air purifier zaps pet dander, pollen, dust, mold and smoke. It helps remove allergens from the air. And it will filter and circulate air in your room up to five times an hour.

The Best Air Purifiers for Allergies 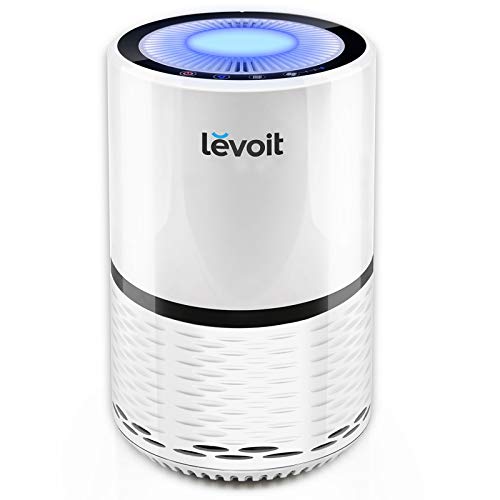 Get this air purifier if you plan on using it mostly during the summer, when you're running the AC. It helps get rid of common allergy triggers such as dust mites, pollen, mold, pet dander, as well as other small particles and pollutants, that can kick off sneezing fits. You get serious bang for your buck with the Levoit air purifier, which delivers major cleaning for a solid price. The Levoit air purifier has a three-stage filtration system to remove 99 percent of dust, smoke, allergies, smokers, odor, mold spores, pollen and pet dander. Plus, it has three speed settings, depending on your needs. It's ideal for smaller-size rooms. Each filter lasts 6 to 8 months.

Unlike any other air purifier on the market, Molekule doesn’t use a HEPA filter, it uses a PECO filter. The difference is that instead of trapping particles on a filter, Molekule destroys them on a, wait for it, molecular level. Molekule is ideal for large rooms, like your living room, and can completely replace the air in a 600 square foot room once an hour. The story is this: Goswami is a mechanical engineer by training but when his son Dilip — now the CEO — developed severe asthma and allergies, his dad spent 20 years developing the technology behind this product. It's worth the investment. First of all, it’s beautiful. A matte aluminum 23-inch tube with a leather handle. Secondly, it’s quiet AF. Molekule filters the air in a 600 square foot room in an hour.

The Best Air Purifiers for Pets 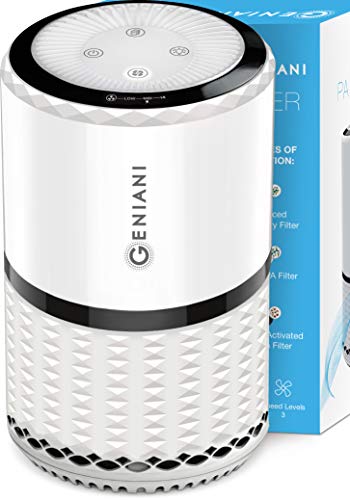 If you're dealing with smelly pets, or your house has that special cat smell, snag this air purifier. With this HEPA air purifier, you get three-stage filtration. Plus, it's compact at only 13.5 inches high. It has a nightlight function, if you need it, and three speed levels. It covers an area up to 160 square feet, so it's best for small rooms. 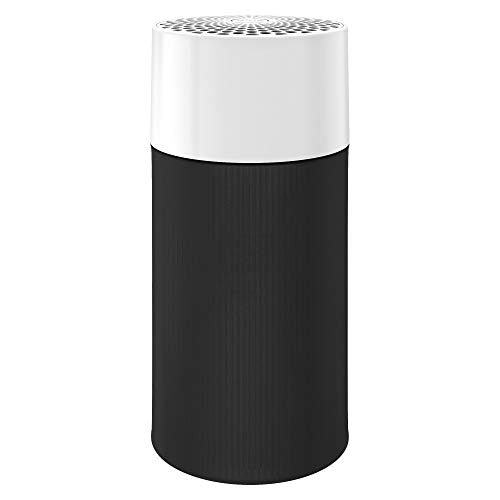 This Blue Air purifier has a three-part filtration system that captures 99 percent of common airborne PM 2.5 pollutants such as mold spores and pet dander and an activated carbon filter that removes common odors caused by smoke, pets, and other airborne nastiness. This air filter is meant for small rooms and is super-quiet. It will clean the air in a 161 square foot room five times an hour. The pre-filter on the exterior of the air purifier is washable and can be changed to match your decor. Really. 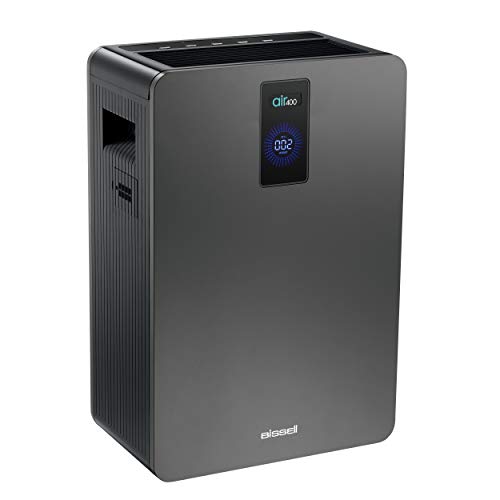 If you have pets, and you don't like pet odors, get this air purifier, which helps kill them. The odors, not the pets. The Bissell air400 air purifier features its own CirQulate system so you can set it and forget it. It's got a digital 20,000-hour DC motor that exchanges the air in a 400 square foot room three times per hour when on max mode. So that stench of cat litter? Gone. It's got three stages of filtration, and a carbon filter to capture household smells. The aforementioned CirQulate system uses a particle sensor to monitor your indoor air and adjust the speed of air flow accordingly.

air purifiers allergies Commerce
ADVERTISEMENT
ADVERTISEMENT
More From Gear
Baby The Best Contraction Timers and How to Use Them
Tech The New Apple Watch Series 6 and SE Are the Perfect Family Smartwatch
Home This Shower Wine-Glass Holder and Speaker Is Decadence, 2020-Style
Gear The Best Hand Sanitizers for Kids
Gear Darksaber Lightsaber and Other 'The Mandalorian' Season 2 Toys Are Here
Gear Baby Yoda Night Light Lets Your Child Fall Asleep With The Child