Think cornhole is fun? Try a game of Kubb or Mölkky and get back to us.

The best backyard games, the ones that earn a coveted spot in your warm weather rotation, are casual activities that work as well for crowds as they do for one-on-one matchups. While we won’t ever turn down a game of cornhole, kanjam, ladder toss, and horseshoes, the best backyard games and lawn games come from Scandinavia. Why? Simple. Because of their soul-witheringly long winters, Scandinavians know how to celebrate summer. That celebration often includes participation in simple, fun games that lend themselves to hours of time on that oh-so-important sunlight. The games on this list exist are those that require you to throw one thing at a set of other things. They’re easy to pick up but still require skill and, when the time is right, lend themselves to serious competition. Think cornhole gets competitive? Try a game of Kubb or Mölkky and get back to us. Here are a few games to consider adding to your backyard this summer. 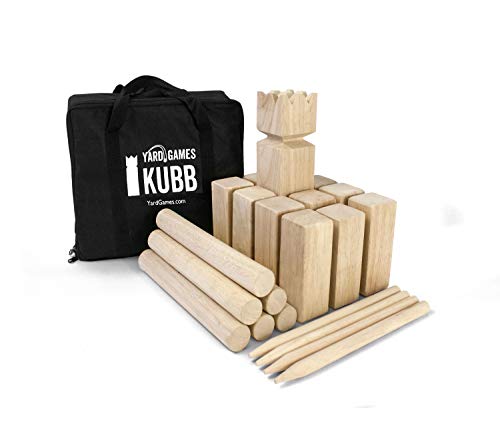 The Swedish game Kubb dates back more than 1,000 years, when Vikings first conceived of the game as a pastime during those, long light-filled summer nights when they were finished sinking Skeggøx into the chests of their enemies. Legend has it, they’d lob the skulls and limbs of their slain foes across a decreed playing area; eventually, over centuries, it evolved into a more civilized game. In recent years, its exploded in popularity. Modern Kubb sets are, thankfully, made of carved wood instead of cadavers. Each contains 10 wooden blocks, called kubbs, as well as a foot-tall king (marked by a set of points to designate a crown) six tall blocks, and six skittles, the latter of which are used to demarcate a playing field. Once the field is set up properly, the object of the game is to lob kubbs in an attempt to knock down an opponent’s pins and, finally, their king. Accidentally knock down the king before the other pins results in an automatic loss. Simple, but good for hours of warm weather entertainment. 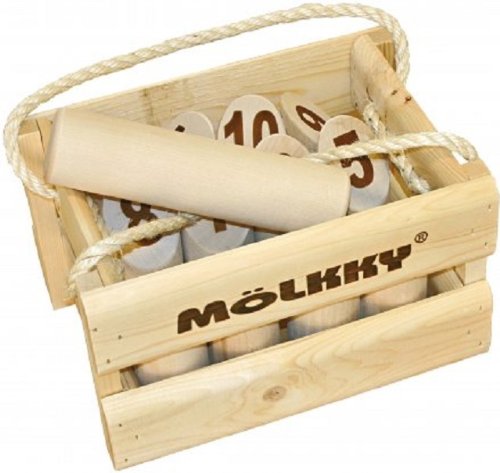 More or less a mash-up of cornhole and bowling, Mölkky is a Finnish lawn game similar to Kubb. Twelve slim, numbered pins called “skittles” are set up on the grass. Teams take turns throwing a wooden block, or karttus, at said pins in an attempt to knock them down. The team who is first to knock down 50 points worth of pins wins. As is the case with games that have been around for a very long time, the rules vary and some are more complicated than others. Regardless of which you follow, the outcome is the same: fun. 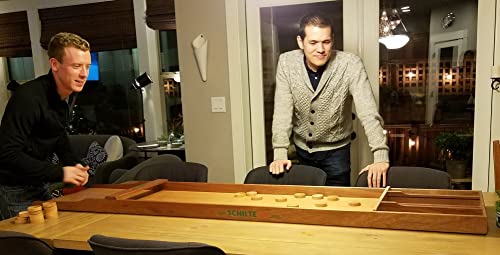 A board game that can be played anywhere but is best befitting of the backyard, Sjoelbak is the Dutch version of shuffleboard. It consists of a 16-inch wide, 79-inch long wooden board and 30 wooden pucks. Each side of the board has four wooden channels; players take turns sliding pucks, trying to get them in appropriate lanes. After three rounds, the pucks are totaled (scoring is a bit confusing, but the rules are explained here) and the winner is decided. Again, it’s quite simple. But set up the board on a back table and don’t be surprised if it’s played long into the evening