The other night, Justin Baldoni was hanging out at home in Ojai with his wife Emily and their two kids, Maxwell, 3, and Maiya, 5. And then seemingly out of nowhere, his son busted out an opinion that didn’t sit well with either dad or mom. One that left Baldoni, a deeply introspective actor and writer, perplexed.

Baldoni can create the most equitable of environments at home, but when his kids go out into the world, they see the same images as the rest of us. Boys are tough, athletic, and stoic. Girls are sweet, polite, and cute. Which is one of the many reasons Baldoni just wrote a book, Man Enough, that explores what masculinity means as it pertains to body image, sexuality, and fatherhood. To his credit, Baldoni manages to discuss gender roles and perceptions in a way that’s neither didactic or tiresome.

“I think that men are sensitive and emotional and open. I think that we are empathetic and kind and good. And once there’s room to have these conversations, I think that that’s going to snowball and things are going to change rather quickly because the one thing that every woman in my life will tell you, is that when you get a man to open up, he’s got a lot to say,” he says.

What do you make of the term toxic masculinity, which is thrown around a lot in our culture?

I don’t like it. I don’t use the term toxic masculinity because it’s been politicized and in many ways weaponized, and it’s a division between women and men in the same way. The work that I want to do is healing and unifying. So even if maybe it’s an accurate term, if I identify as a male feminist or whatever I am, if it causes division, I don’t want to use it. I don’t think that the way to heal anything is by calling people out.

Therefore men go, ‘Oh, well, so I’m bad. So I should just apologize for being a man. I’m just a bad person. I’m just toxic.’ And then they misconstrue the message and then they go off. You just don’t get them back because they won’t listen. I am more interested in the invitational approach, which is, let me call you in. And let me talk to you as a guy. Let me talk to you as a dude. And let me show you how I believe we have been brought up in a patriarchal society that is hurting us and causing us to hurt so many people including ourselves. And that’s really my approach. My approach is invitational. I want to create unity. 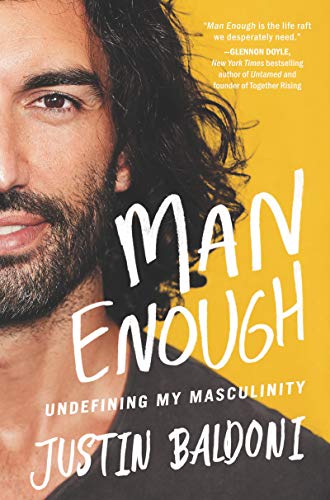 Justin Baldoni explores what it means to be a man in this honest, raw book.

So how do you get guys to open up, to be vulnerable?

I have been a part of the boys club, even though I didn’t feel good being a part of it. And I’m writing from that place. I want to also challenge men emotionally. Because we learn from each other, I just want to be a man who can model vulnerability in a way that it can then invite others to do the same in their life. And that starts with questioning. It starts with doing a deep dive into ourselves.

You have a son and a daughter. Do you parent them differently based on their genders?

So I don’t know if this is going to make sense, because I’ve never actually been asked this question. But I know that the world, the schoolyard, the world outside of this house is going to do everything it possibly can to turn my son into a robot, into an emotionless, fearless, compassion-less directional boy who doesn’t cry when he gets hurt and keeps going. And that the world will try to turn my girl into a good little girl, who listens and who crosses her legs and who isn’t too much for anybody.

So what I’m trying to do, and the reason why I would say that I do treat them a little bit differently is that in some ways I’m trying to offset what I know is going to happen to them already. I’m working harder on my son’s emotional literacy, on his sensitivity, on his compassion, and his empathy. I’m really trying to talk through those things, remind him of how beautiful it is when he cries.

And in some ways with my daughter, I am pushing a little bit more of the traditionally masculine things on her. She knows that she can do anything else a boy can do, right? I reinforce the idea that she’s powerful and she’s brave and she’s strong and she’s super-athletic and she can jump off high things if she wants. But then together I’m parenting them identically. I still encourage her to have all of her feelings and emotions. I just encourage Maxwell a little bit more.

That totally makes sense. To a large extent, kids are who they are. All you can do is provide guidance.

You have to look and see what your kids are predisposed to. So my kids on their own went pink and blue and they’re on their own with princess and trucks. I didn’t do that. My daughter is all princesses and my son is all dinosaurs right now. So they’ve picked those things. Great. I don’t want to change that. It’s not my job to change that. It’s my job to accept who they are naturally. If I would’ve had kids at 25, there’s no way I would’ve done that.

This is all new. And I’m learning every single day. And we’re just trying to be as aware as possible and create strong, foundational roots so that when the world has its way with them, they’re not so easily swayed.

Are there certain words you don’t use around your kids, words that you think parents should avoid in general?

I’d start by avoiding the words good and bad. I don’t think it’s good to ask our kids to be good or punish them for being bad. It kind of goes back to that toxic masculinity thing. I don’t think anybody is either good or bad. What does it mean to be bad? As an example, if my son’s throwing a tantrum and he hits his mom or his sister, and I tell him he’s bad. What’s bad? Was it the tantrum? Or was it the hitting?

And I think we have to be really specific in our parenting and language because I don’t want my son growing up thinking that throwing a tantrum and having huge big feelings is bad. I want him to know that we don’t hit bodies. That as boys, we might be in some ways stronger or bigger over the course of our lives than girls, but that just means we have a bigger responsibility to not hit. We love bodies. We’re gentle.

And I’m not like this hippy-dippy. I’m a disciplinarian with our kids. And so is my wife, but it’s about what are we disciplining them for? And what’s the language we use around it? I think it’s important to never say that’s for boys or that’s for girls. I want Maxwell to never look at another boy and think that because that boy is different than him, he’s not a boy. This is where it all starts.

Clearly, Obama approves. He’s delving into what it means to be a man on his podcast.

Now you’ve got Obama talking about it. We have a second gentleman. That’s never happened before. I got a chance to meet him yesterday, which is really cool. It’s a very different world and it’s a really exciting place to be.