Chef David Chang on Parenting, Mental Health, and the Joys of Fried Rice

The chef, host, and culinary mastermind's new memoir serves a lot of inspiration — and some deep truths about mental health.

When David Chang began crafting what would become his memoir, Eat a Peach, he never sat out to create what the New York Times praised as the “literary equivalent of slurping hot broth at a communal table.” In fact, he told himself he was toiling away on a how-to handbook on opening restaurants. Given that he runs the Momofuku culinary empire, it was familiar, if not exactly scintillating, territory.

Instead, he produced something personal and unflinchingly honest, the memoir version of the ramen that made him famous: Hearty and rich, yet also surprisingly smokey and piquant, with unexpectedly shocking explosions of flavor. In the book, Chang reveals that even as he soared professionally as the rowdy wunderkind of the restaurant world, he was privately lurching between manic and depressive phases. He had at one point fixated on suicide, something he knew would eternally shame his traditional family. So he kept those truths on ice, manning his kitchens, penning his cookbooks, and globe-trotting on his Netflix travelogue Ugly Delicious — until close friend Anthony Bourdain killed himself two years ago. “And when Tony passed, I said, ‘Fuck it,’” he says of the moment he chose to disclose his struggles with mental health in his memoir.

So many struggling with mental illness need those like Chang to talk about their personal battles. It’s important work. But has opening up been cathartic for Chang? He’s still on the fence, without the benefits of hindsight. “I’m still coming to terms with that. It’s weird. It’s a little bit like opening up a restaurant but not. You have to give it a couple of months. I’m trying weirdly not to think about it even though I’m doing press for the book,” he says. “The book did not really take shape until I started to be more open about my mental illness.”

Calling from the west coast, where he lives with his wife Grace Seo Chang and their son Hugo, born last March, Chang talks to Fatherly about opening up about mental health, what he wants to teach his son, failure, and the joys of fried rice.

I commend you so much for speaking out about your mental illness. So many men keep that locked up tight.

It’s not just men. Immigrant men too. Asian-Americans specifically. You don’t talk about this ever regardless of your gender. I’m trying to be better and more self-aware as a person. That means realizing you’re fallible. It means learning to forgive myself on the totality of the decisions I’ve made.

The book was a process. It was a lot of work, a lot of whittling down and editing down things to make it a story. We found patterns. I’ve had years of therapy so I was a little bit more able to speak about them. I was trying to find a way to talk about things. This book touches on mental illness, Asian-American identity and the culinary world. It’s about learning new perspectives.

Do you think putting it on paper gave you insights on how to be a better parent?

That’s the goal, right? To be the kind of father figure that I never had. But I do think that being a leader, a reluctant leader at times, it’s about understanding the meaning of free will. My job as a parent is to instill a mutually agreed upon set of conduct and moral compass and code and ethics. The culture I’m instilling upon Hugo is an environment he can choose from. The hardest part is realizing that the best kind of parenting is being present and to not interject yourself.  To know that something is going to happen and to hold yourself back from interjecting yourself. It’s about learning when you should add value to a situation. That’s the hardest thing in the world because you’re fighting your impulse to fix things.

Right. You need to let them solve things on their own, no matter how hard it is.

When Hugo was sleep-training. My mom came to visit and she sort of got mad at us because Hugo was crying. She’s like, ‘You should help him when he’s crying.’ We tried to explain to her that that is not what we’re going to do. Things have changed and we’re going to decide to do it this way. We’re trying to get separation and not be there every time when something goes wrong and to have him self-soothe. We’re not at the bar drinking. We’re literally on our bed next door to his room looking at the monitor, asking ourselves, ‘Should we go in?’

Being present means being there when you’re not there. Of course Hugo has fallen. If I’m there to save him every time, he will learn I’m the safety net. The hardest thing about love — it’s letting someone get hurt. Love is pain. No one wants to see their kid in pain.

I know many parents will do anything to smooth things out for their kids. They take it to the extreme.

I always joke about the Lori Loughlin thing, how they cheated to get their kids into school. I’m sure Lori thought she was doing it to be selfless. If you really unpack that, what you’re sort of doing is disguising the love you have for your child with love of yourself, the embarrassment they couldn’t get into school. The shortcuts. Maybe your kids should just fail. Failure is a two-way street. It’s going to mean more investment on your end. That’s hard for parents.

The hardest part of having a plan is realizing not to stick with it, to evolve. I can get any cook to do anything out of fear and intimidation but what happens when my back is turned? Integrity in the kitchen is to do things the right way without getting any recognition whatsoever. How do I encourage someone, how can someone encourage me to do something, when it’s on my own volition? There’s no one answer.

It’s trying to get Hugo to eat and not make a mess. That’s basically it. Me cooking. I cook the majority of the meals. I cook most of Hugo’s meals. I try to cook meals where he can eat the same thing we’re eating. He doesn’t want anything I make anymore. All he wants to eat is rice. Bananas, avocado, all the things he used to like — he doesn’t care. He pours every drink on the table and the floor. That’s where I’m at.

Do you have one food that’s always a hit?

Fried rice. Everyone in my household likes fried rice.

I realize the restaurant industry has been decimated by the pandemic. What does cooking mean to you, on a visceral level?

It’s the best way I can emote my feelings for my family and communicate. It’s just one of those things. It’s giving someone pleasure, not just sustenance. There’s very few things I can control in my world right now. But I can make a good meal and make people feel good.

Eat a Peach is out now. 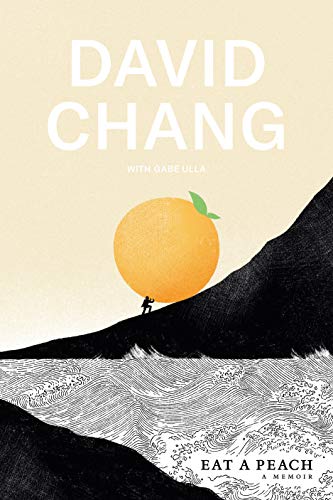 Eat a Peach: A Memoir