As co-anchor of Today, the preternaturally upbeat and optimistic Craig Melvin’s sat down with everyone from author Ta-Nehisi Coates to President Joe Biden. But his toughest interview, by a factor of roughly 900, was with his own dad, Lawrence Melvin. The two had had a fractured, uneven relationship; Melvin was raised largely by his mom, as his dad battled various addictions throughout his childhood. The two reconnected later in life, and in his new book Pops: Learning to Be a Son and a Father, Melvin “investigates my father and how he came to be who he is. I wanted to ask the kinds of questions that a lot of folks want to ask their parents, but never really have the courage to. It was an investigation into him, but it also ended up becoming an investigation into to myself.” 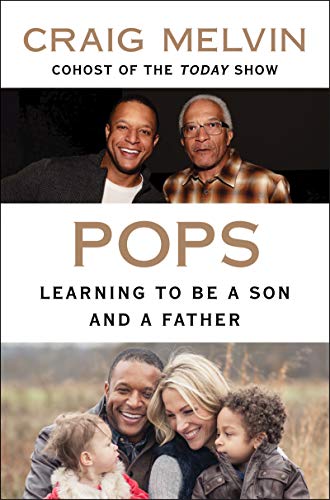 Pops: Learning to Be a Son and a Father

Lawrence Melvin didn’t have an auspicious start in life. He was born in a prison, didn’t learn who his own father was until he was about eight or nine, and their relationship could be summed up in one word: “None.”  The younger Melvin, with his mom as a role model, set out to do things differently with his own two kids, Delano, 7, and Sybil, 4. By writing the book, says Melvin, “I discovered a lot about what makes me tick and why I’m probably wired the way that I am to a certain extent. It’s also a celebration of fatherhood, and we don’t do a lot of that.”

He talks to Fatherly about lessons learned, patterns broken, and his own superpower as a father.

What did you learn both about yourself, and fatherhood in general, by writing this book?

It took me getting older to fully appreciate this idea that you can’t be something if you’ve never seen it. My father had never seen a good father. So how, in what universe, would it have been reasonable to expect he is going to be this perfect father, even a really good father, early on. He found his way. I’m finding my way.

We model the behavior that we saw growing up and my dad didn’t emote. I can count on one hand without using my thumb the number of times I’ve seen him cry. You didn’t talk about your vulnerabilities.

Right. And we can only do better than what we know.

I’m not nearly as screwed up as I thought. Going in, you start talking, you have kids, you start talking to other folks with kids. And if you’re real honest about the challenges and the triumphs of it, you realize pretty quickly we’re all finding our way. None of us are really that great at it. As I said to my wife earlier today, we’re just trying to keep them alive. Last night was one of those nights where at 1 a.m., um, my son came in because he was scared and an hour and a half later, my daughter comes in. She didn’t give a reason because she doesn’t really have to, in her mind. It’s just a random Tuesday morning.

When did you feel like you nailed it, as a dad?

What’s your superpower as a father?

My superpower as a dad — I don’t know if it’s a superpower. I’m pretty much (even) all the time. I try not to get too high and I try not to get too low. I think it serves me well with the kids. When I ask them to do something or not do something, which is more often the case, they typically respond. Now I’d say maybe once, twice a month, I hit my limit and I have to demonstrate to them that I am capable of crazy.

You’ve talked to a lot of famous people. Who was the most challenging and daunting?

I did the president a few weeks ago and those were always hard.

Were you more nervous asking him questions or interviewing your dad?

My father easily, hands down. I might see the president once, twice a year in person and he’s used to dealing with jackasses. I didn’t want to screw this up, with my dad. That was a great fear early on, especially when I realized my dad was going to be honest. Telling my dad’s story of addiction and resiliency and redemption, ultimately, I think that’s a story a lot of folks can relate to.

How are you raising your kids differently from how you were raised?

We encourage in our household, the sharing of all emotions — we encourage it sometimes to our own detriment. My son is more sensitive than my daughter. I read in one of these parenting books before I had before we had our son, about the importance of always having a running dialogue with your children, always talking to them, always making sure that they know they can talk to you. We encourage this, we want them to share everything.

This is one thing about my father that I’ve always admired — he’s comfortable in his own skin. And I think children who are comfortable in their own skin, they develop self-confidence that serves them well throughout life. I think part of it comes from being aware of your feelings and able to talk about those feelings and being okay with those feelings. These aren’t conversations that dads were having 25 years ago.

books father's day gifts
ADVERTISEMENT
ADVERTISEMENT
More From Play
Play The Heartwarming Father-Daughter Story Behind a Riveting New Thriller
Play 'Atypical' Just Ended Its Netflix's Run — Time To Binge It With the Family
Play Exclusive: Watch the 'Luca' Cast Explain Why Kids Are Bad at Friendship
Play 10 of the Best ‘90s MTV Cartoons You Totally Forgot About
Play 'Arthur' Has Been Canceled By PBS. Long Live, Arthur!
Play Matt Damon on Parenting a Teen, Returning to Jason Bourne, and His Thor Dreams