Channing Tatum Wanted to Impress His Daughter. So He Wrote ‘Sparkella”

Becoming a parent changes you profoundly and alters your entire worldview, shifting the focus from me-me-me and forcing you to put a tiny human being first. In theory, at least, you become more selfless, more patient, as you grasp the meaning of unconditional love. It also makes you understand that when you have children, certain things are non-negotiable. Like those minuscule bright metallic, iridescent, light-reflecting particles that seem to reproduce on their own, and remain impervious to vacuums.

Channing Tatum is a dad who naively assumed that with his dancing (that’s him in Ricky Martin’s She Bangs video and the Magic Mike movie) and Dolce & Gabbana modeling days behind him,  that now, as an A-list actor, producer, and children’s book writer, he could be out in public without those telltale sparkles all over him. Only the universe laughed in his face.

“I remember being like, all right, I have to get used to always having glitter in my hair. I thought glitter was going to be done in my life after a certain age. And then you have a girl and you’re like, ‘Oh no, it’s here forever.’ Forever, forever. The amount of times I’ve been in like a serious meeting, with investors or studio heads…glitter is in my bloodstream, don’t worry about it. Even if I got that piece of glitter, another part would come up somewhere as soon,” says Tatum. “If you can, just don’t pay attention.”

Or if you’re Tatum, take that glitter and turn it into a sweetly moving kid’s book about Sparkella, a little girl who’s shiny and bright and iconoclastic, but whose individuality elicits some scorn from her peers. It’s both an ode to being yourself, and an even bigger ode to his daughter Everly Tatum, 7, from his first marriage to Jenna Dewan. Tatum talks to Fatherly about sparkles, humility, and raising good humans. 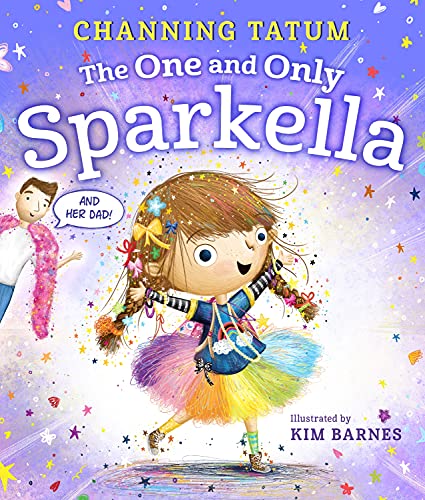 The One and Only Sparkella

Channing Tatum's book celebrates a girl who doesn't let others ruin her sparkle. Or diminish her shine.

I think the last time we spoke, your daughter had just been born and here she is, 7 years old. It’s scary how time flies. How did you guys hold up over the last year?

It felt like last year almost didn’t happen. It was weird stasis, but yet flying by. I still feel guilty because I have a farm out in Ojai, outside of L.A., and we just came out here and we were riding dirt bikes and horses and playing outside. I felt super-guilty. The whole rest of the world was in turmoil and people were dying but we kind of were living our best lives.

It did make me appreciate the very small things. I was starting to do these very micro-inventories of the things that I was very, very grateful for. I think the guilt made me do that. I love my pillows on my bed. They’re perfect for me. That they’re the perfect size. They’re the perfect pillowcases. I love my bed. I have my bed sorted. It’s great. I love my coffee maker. My coffee maker is incredible. It grinds the beans. This thing is incredible. It’s not expensive. It’s not nice. It’s super normal, but it’s perfect.

I love the message of your book: Never lose your sparkle. Did you write it during the pandemic?

There was a very loose outline. What the book was going to be about was done before the pandemic. And the first book is very much about when you’re nervous and when you’re scared about how things will be, what do you do? The second book is, for lack of a better word, it’s when things are not going according to plan and your plan is failing, what do you do then? The third book is probably going to be about when things have gone wrong, when all hope is lost, what do you do then?

I never planned on being a writer. I barely graduated high school. I love stories. I remember the first time I read Harry Potter, I was just imagining the magic and what it looked like. It’s on the reader to take themselves on the journey. You’re putting the characters and the setting in place and structure in place for them to really start to see it and see how it’s all working and picture books are even kind of more rad because you’re more teasing out what things could look like.

You’ve said before that this book was a way for you to connect with your daughter.

I didn’t know how to raise a kid in LA, much less like a girl in LA. Then I got to the farm. I play like a homie more than I think maybe some dads might. The key for me, when I really started to become confident that I was going to be able to be a dad, a good dad, was when I just started to go into her world. If she wanted to paint my nails or if we wanted to literally sleep outside because she wanted to see a fairy, I just was like, ‘Yeah, let’s do it.’ That was my key. That was my way in.

What kind of dad are you?

I’m more like a kid than a dad, more than likely. I was really afraid that I wasn’t going to know how to be a dad, especially a dad to a girl. Becoming a single dad, there are going to be things that I won’t know how to relate to her about.

When I found out I was going to have a girl, I literally went to YouTube and learned how to braid hair, because I just wanted to be able to know how to do that. Because I don’t have hair. I’ve always had a shaved head. I literally know nothing about hair care. Thankfully I did that because my daughter has the straightest, finest hair that you could possibly have. There was tons of stuff and a lot of fear around not knowing what to do and not knowing what kind of dad to be. I had a certain dad — it was just very Southern. He did the best he could.

So you have a three-book deal and you’re also in the Lost City of D, with Sandra Bullock, which is a pretty massive undertaking.

It’s one of the first movies that I’m so happy that I’m not producing. It’s all you, Sandra. She is a beast when it comes to this — and she keeps it fun. She’s been doing it at the highest level for the longest time. I’m so excited to just go be an employee. I’m happy to go and have fun on a movie, literally go to my trailer after the scene and just be like, ‘Ah, like, I don’t need to worry about that.’

Movies are hard to make. It’s one of the only art forms you cannot do by yourself. You have to have an army of people to help you. You can paint a picture, you can go on the corner and sing, you can play a guitar.

You’re also just a good dude. I know this from experience, and from what so many others have said. How do you not become a dick when you’re so famous?

That means a lot. Thank you. I can’t really speak for other people. I think we are very much where we come from and our experiences. I’ve had a full life. I really have come from a place where I never thought I’d be an actor. If you told me that I was going to own strip clubs, I probably might’ve believed you. I think I’m just grateful. I never, in a million years, thought that any one of these things was going to happen to me.

It’s been better than winning the lottery. I’ve won a creative thing. I modeled and I thought that was winning the lottery. I didn’t do anything to earn that. That was something that was completely given to me. And then to parlay that into actually falling into — I had no idea how much I loved movies until I started acting.

People that aren’t nice, I think more than likely have had something in their life that they feel they need to pay forward in a way. Someone might not have been nice to them and now they have the power now.  I’ve dealt with the weird thing of all of a sudden being given power. It’s strange. It’s a strange thing when you’re really just trying to get a job. And then all of a sudden you are now given all this power to call the shots. It can really go to your head. The fame thing, the power thing, I was a kid when I started to become a person that the studios were asking to be in their movies. You can definitely get gassed up that you’re more important and that you’re smarter than you actually are.

Our kids are both privileged, just in different ways. Have you figured out yet how to raise a human who appreciates everything they have?

It’s a daily thing. The one word would be  “grateful. “My daughter’s going to have a really blessed life. We have really nice things and she’s not going to live in a trailer. How you keep her aware of what other people have and what other people don’t? That’s gonna be a hard one.

You can’t control their experience.  Otherwise, you’re going to spend your days saying that I’m going to take everything away from you and I’m going to let you really feel what it’s like to have nothing. Why am I doing that?

She definitely has a big heart. She’s sensitive to when someone hurts themselves or something happens to somebody. She definitely is aware of other people’s feelings. I think that’s kind of where it has to start first. If they’re only caring about their own experience, I think that is always a trap. If you can show or lead them into being aware of other people’s experiences, it’s pretty important.