A long time ago some dad cracked open a book and thought “These words are not holding my child’s attention.” Thus, the picture book was born. That kept children interested for a while, but alas, they were children and were easily bored by things.

Thankfully, it didn’t take too long before design geniuses with serious paper engineering skills decided to make those pictures jump off the page, Look at all this extra dimension of excellence your son or daughter can enjoy — so spoiled! Here are 10 of the craftiest pieces of literary origami you should put on their less-crafty bookshelf.

Why are your kids learning their alphabet in 2 dimensions, when the third is arguably the coolest? (The definitive order of dimension coolness: Third, fourth, second and first). Marion Bataille shows just how the Roman characters are interconnected with some seriously innovative paper folding. Now they know their ABCs.
Ages: 2 – 4
ABC3D by Marion Bataille ($25)

It’s a counting book, but it’s also kind of a Where’s Waldo for the preschool set. As the title suggests, each page contains one red dot within the intricate pop-ups. It teaches numbers, patience (because some of those dots are damn small), and most importantly, how easily paper rips in a book you spent $30 on.
Ages: 4 – 8
One Red Dot by David A. Carter ($30)

This Book Is A Planetarium 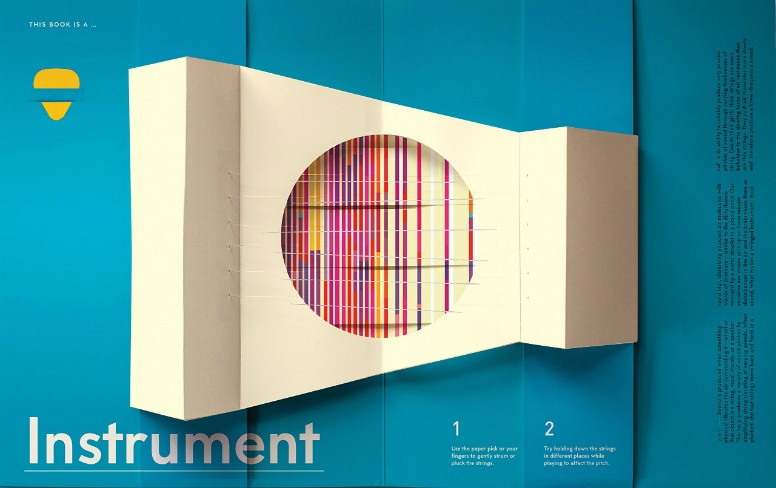 Kelli Anderson’s upcoming book that’s a camera is pretty damn cool. The book coming up after that pop-up is a 6-in-1 tool, a masterpiece of engineering, and just as literal a title. Contained within is a constellation projector, a musical instrument, a spiralgraph, an infinite calendar, a message decoder, and a speaker. Neil deGrasse Tyson just invited himself over for bedtime.
Ages: Whatever age your kid stops destroying things to 100
This Book Is A Planetarium by Kelli Anderson ($40)

Nobody likes pirates — especially that Jake, who is just in it for the doubloons. But in this pop-up fairy tale, you need to help the Castaway Pirates, who are in imminent danger of sinking and getting eaten by sharks, which is a fate worse than whatever fate is fit for pirates. The lesson here is that persistence will pay off in the end. Or, if you smell bad enough, predators won’t eat you.
Ages: 3 and up
The Castaway Pirates by Ray Marshall and Wilson Swain ($15)

From the Caldecott-winning author that made the wheels on the bus go round and round comes another kids’ nursery rhyme done up real pretty in pop-up. Once you get past your suspicion of these old men who jump out of hiding to play “knick-knack”, the book has some cool, spinning conveyances that roll these (probably) innocent gentlemen home.
Ages: 3 – 7
Knick-Knack Paddywhack by Paul O. Zelinsky ($10)

The Wonderful Wizard Of Oz: A Commemorative Pop-Up

For the 100th anniversary of L. Frank Baum’s classic, Robert Sabuda (who is pretty much the Picasso of paper) took on an abbreviated version of the story and mirrored W. W. Denslow’s original illustrations. The result is a Wizard of Oz story that’s different from the munchkin and flying monkey movie that your kids are familiar with.
Ages: 4 – 8
The Wonderful Wizard of Oz: A Commemorative Pop-Up by L. Frank Baum and Robert Sabuda ($30) 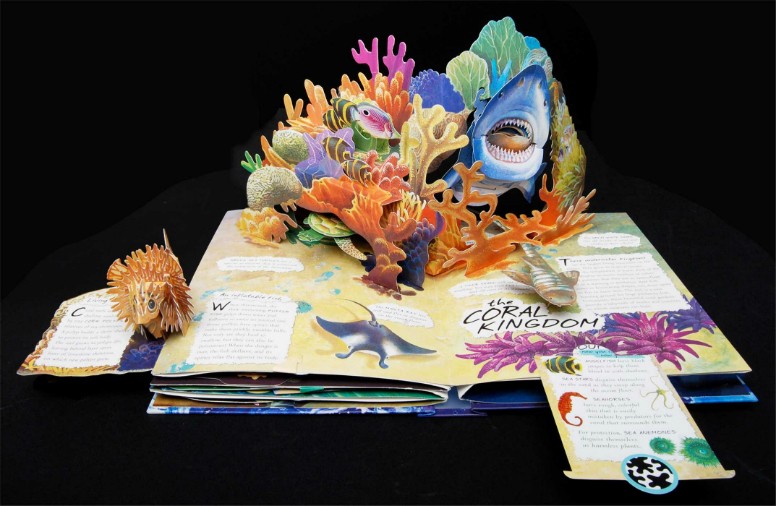 If your trips to the beach are mostly about fried clams and ice cream, try getting your kids involved with these detailed renderings of ocean life. This book is a good first lesson in reef life, marine mammals, and deep sea creatures. At best it will spawn a young Jacques Cousteau. At worst, a child who doesn’t eat seafood.
Ages: 6 – 10
Wild Oceans by Lucio and Meera Santoro ($30)

Start with this volume of Robert Sabuda and Matthew Reinhart’s spectacular Prehistorica and Mythologica series. Their pop-up wizardry brings all the spikey-armored, teeth-gnashing, treetop-munching prehistoric creatures to life. Now, they won’t embarrass you at the Natural History Museum by calling an apatosaurus an ankylosaurus — duh.
Ages: 5 – 9
Encyclopedia Prehistorica: DInosaurs by Robert Sabuda and Matthew Reinhart ($35)

Star Wars: A Pop-Up Guide To The Galaxy

Now that you’ve taken your padawan to see The Force Awakensdozens of times, continue their training with Matthew Reinhart’s encyclopedic pop-up of all things Star Wars. Nobody is claiming that this pop-up book will teach children their ABCs or 123s, but if there were to ever be an intergalactic civil war, you’ll be glad this was on the bookshelf.
Ages: 8 – 12
Star Wars: A Pop-Up Guide to the Galaxy by Matthew Reinhart ($35)

The guys at Warby Parker have done a lot to make glasses cool, but try to find a first grader who wears “fashion frames.” Arlo gets it. This cartoon dog guides your bespeckled kid through the process of getting your eyes checked and fitted for glasses. No need to explain why dogs need glasses, though.
Ages: 3 – 6
Arlo Needs Glasses by Barney Saltzberg ($16)

ADVERTISEMENT
ADVERTISEMENT
More From Play
Play The 33 Best Riddles for Kids That Aren’t Too Confusing
Play 50 Tricky Riddles That Will Keep Even the Smartest Kids Guessing
Play 78 Funny Jokes for Kids (And Adults Who Like Dumb Jokes)
Play 87 Coronavirus and Quarantine Jokes to Retrain Your Face to Smile
Play The 21 Funniest, Snowiest Winter Jokes for Kids and Chill Adults
Play What Is the Best Order to Watch the ‘Star Wars’ Movies on Disney+?