Confound Your Kid With These Incredible Optical Illusions

If you’re looking for a cheap, easy way to occupy your kid’s attention and legitimately blow their minds without having to spend a dime or leave your living room, look no further than this collection of freaky optical illusions. Actually, you may have to look further. Depends what you’re trying to see. But that’s neither here nor there, much like those lines that aren’t really moving. (Who knew optical illusions were such sweet #DadJoke material?)

While it’s always fun to get one over on your kid and watch them try to figure out the trick, when it comes to optical illusions, you might be staring at them just as long. That’s because it’s really easy to fool the human eye, and your eyes are just as dumb as your kid’s, regardless of your allegedly superior intelligence. So pack yourself a lunch and a soda, and don’t move until you and Junior see that sailboat everyone keeps talking about (which, in perhaps the greatest illusion of them all, was never a sailboat).

You can actually buy one of these creations by award-winning illusion designer (totally a thing) Kokichi Sugihara, so you can blow your kid’s mind with a physical object (as opposed to one on a screen) and have the perfect prop handy next time someone drops “square peg, round hole” on a conference call. Turns out the former can fit into the latter, at least when reflected in a mirror, if a particular curve is cut along the top of the figure.

Sure, you’ve already hacked playing ball, but it’s too bad this is just an illusion because you’d have that many fewer pitches to learn if your kid could play catch with themselves. There’s some clever editing here, but recreating this (gotta grab those likes) is actually a physics lesson: the camera tricks only work if the ball is perfectly tossed to hit the mirror at the top of its bounce and follow the same arc back to the hand. Twice.

Their eyes are bigger than their stomachs (not an illusion, just an expression), so even if they don’t figure it out, they’ll want to eat all of it. On second thought, maybe it’s best to leave cake out of activities requiring mental focus from your kid. If you want to flex your brain power, it’s actually not super hard to make this thing. The illusion is achieved by airbrushing the wavy-patterned frosting with different colors from opposite directions.

Those vertical columns aren’t actually moving, their individual components are just drifting (black and white segments cycling in either direction). Try that line when your kid has to make friends at a new school next fall.

If your kid can figure out a way to see all 12 dots in this grid at once, then you call Professor X and get them enrolled immediately. They’ll fit in just fine with the other mutants who are unaffected by lateral inhibition. That’s when adjacent photoreceptors in your retina can’t agree on where to focus their intensity and you see things that aren’t there, or vice versa, or that your kid claims to be able to see but you know they’re lying.

As with the previous illusion, a variation of this one, the dots are in fact there. It’s seeing them that’s a problem. Or in this case, seeing dots that aren’t actually there but seem to flash at random intersections (hence “scintillating”). That’s more lateral inhibition, proving you don’t need booze to blur your vision when your eyes are quite drunk enough on their own.

Both of the above are variations of Hermann’s Grid Illusion, the one you’ve probably seen before where floating dots seem to appear at the intersections of a light-colored grid on a dark background. As opposed to those 2, however, in this instance, the dots really aren’t there.  You don’t need to visit your optometrist, just the Wikipedia page on lateral inhibition (again). Or, if you want to play with this one all day, the lovely county of Cornwall.

A and B are the same color. Really. But how? And how long before your kid unleashes the crayon box like, “Who’s the same color now?!” Two tricks make this illusion happen: First, surrounding like-colored squares with lighter or darker ones makes them appear darker or lighter by comparison, respectively. Second, soft edges and shadows mislead the eye, which, at this point, is like, “Dude, I’m an object perceiver, not a miracle worker … or light meter.”

After your kid watches the dot go from green to purple to gone and back, for once, they’ll wish they were colorblind. This illusion combines 3 effects: The phi phenomenon is when objects viewed in rapid succession seem to continuously move. The afterimage that replaces the disappearing dot is a consequence of your rods and cones instantly adapting to new stimuli, which doesn’t usually happen because you normally move your eyes a lot instead of fixing them on a tiny cross. Finally, Troxler’s fading causes a blurry stimulus to disappear even if it’s still physically there because your visual system can’t shift stuff from your peripheral vision to new, fresh neurons. But your kid doesn’t care about all that. They just hear “Pacman.”

She’s clearly spinning clockwise. But also counterclockwise. And that train is both going and coming to and from the same destination and origin at the same speed, which ruins every algebra problem ever and will seriously screw with some conductor’s day. This type of illusion is caused when there’s no visual reference for depth, which confuses your sense of direction of motion. Either that or you can move things with your mind and your kid is basically Eleven.

Water flows over the edge, water appears to have no boundary or, even better, seems to merge with the sky or ocean. In a perfect world, all optical illusions would blow your kid’s mind and have a swim-up bar. 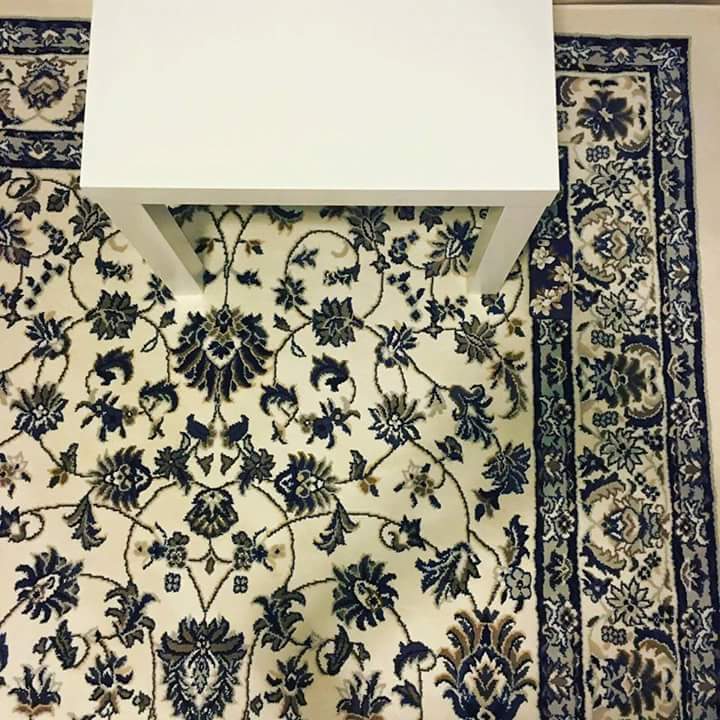 This Rug With An iPhone On It …

… somewhere. Maybe. So you’re told. Damn it, where are you?! Welp, guess it’s time to buy the iPhone Sev— Oh, wait, found it. Phew, you can keep your headphone jack. Wait, what if the headphone jack was just an optical illusion this whole time?

Also acceptable: That glass bag of M&Ms on your Nana’s coffee table that you fall for every time. This is an exercise in forced perspective, a trick that has been used in photography, architecture, and filmmaking since forever and has produced such classic scenes as that pic from junior year abroad where you’re holding up the Tower Of Pisa, and pretty much the whole Lord Of The Rings trilogy.

Anything From This Awesome Video

Jason Paul pulled off his crazy free-running illusions using a blend of forced perspective, miniature props, upside down sets, and badass parkour skills. If your kid is patient enough to let you recreate even one of these scenes, this list ought to preoccupy them for weeks.

Never forget where you were when this monstrosity broke the internet. Maybe your kid can figure it out, because you sure as hell still haven’t.

ADVERTISEMENT
ADVERTISEMENT
More From Play
Play 'Star Trek: Prodigy' Trailer Looks Perfect For Kids With Big Dreams
Play 'Ada Twist' Is the New Pro-Science Version of 'Doc McStuffins'
Play Steve Zahn on Facial Hair, Facing His Fears, And Being the 'God' At School Pickup
Play Obama and Springsteen Team Up Again For Renegades: The Book
Play The Best Things To Do In Denver With Kids
Play Mark Wahlberg On TikTok Dances, Getting Jacked, and Being a "Positive" Dad