Eyes on the sky.

Thanks to a geomagnetic storm that’s pushing the Northern Lights south, the stunning multicolored skies will be visible in certain areas of the United States starting today through Friday morning.

According to the G2 moderate geomagnetic storm watch issued by the Space Weather Prediction Center (SWPC) on Tuesday, the aurora borealis will pop up across the country due to bursts of energy from the sun known as coronal mass ejections (CMEs) that will hit Earth from May 15 to 17.

As the CMEs arrive, there will be two separate windows of time to spot the Northern Lights. One occurred this morning from 5 a.m. to 11 a.m. UTC. Unfortunately, it would have been too light out to really see anything in the sky.

However, the next window, which occurs from 11 a.m. on Thursday to 2 a.m. early Friday morning, could be more promising for stargazers. The SWPC predicts that, along with Alaska, the following states are the most likely to see the celestial phenomenon: Montana, North Dakota, Minnesota, Wisconsin, Michigan, and Maine.

For the best chance at catching a glimpse of the starry skies, experts advise getting as far away from cities and other well-lit areas as possible. “You need very clear skies, a good view of the northern horizon (no trees, buildings, or hills), and it needs to be dark,” an SWPC representative told Thrillist. 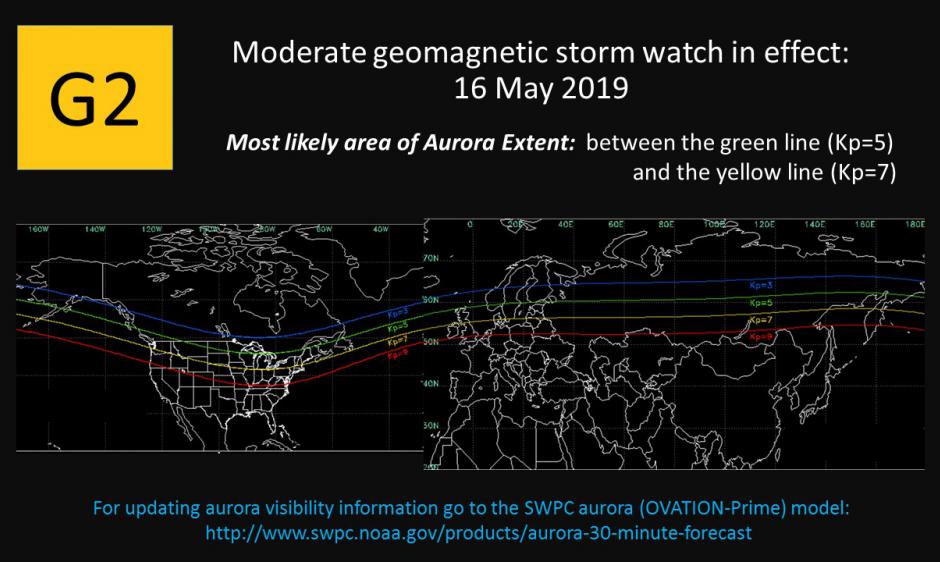 ADVERTISEMENT
ADVERTISEMENT
More From News
News Student Loans Are About to Get A Lot More Expensive — Here’s Why
News Up to $850 in Stimulus Checks Could Be Coming for People in 11 States
News The White House’s Plans to Save Your Picket-Fence Dreams, Explained
News Texas Judge Tells Disney to Relocate — And It Might Actually Happen for This Very Good Reason
News Finally, Inflation Relief! Used Cars Are Finally Dropping in Price — But Slowly
News Georgia Becomes 10th State to Mandate This Fun Extracurricular for Kids