Family Estrangement: Why Rifts Happen and How Families Can Heal

Dr, Joshua Coleman, author of "The Rules of Estrangement", discusses why kids and parents become estranged, how to heal those relationships, and why some of them can’t be saved.

When children grow up and cut their parents out of their lives, the heartbreak is devastating, complicated, and often constant. Adult children lose the emotional and material support of their parents. For estranged parents, everyday questions like “how are the kids?” become emotionally harrowing.

Dr, Joshua Coleman has an intimate knowledge of the particulars of parent/child estrangement. After reconciling with his own formerly estranged child, the Northern California psychologist made estrangement his focus, reaching out to estranged parents across the world through his books and practice. His newly published “The Rules of Estrangement: Why Adult Children Cut Ties and How to Heal the Conflict” is his second book on the topic, following 2007’s When Parents Hurt: Compassionate Strategies When You and Your Grown Child Don’t Get Along. For it, Coleman teamed with the University of Wisconsin’s survey center to collect stories and information from 1,632 estranged parents to paint a sharper picture of modern child/parental estrangement and the many nuances within those relationships.

Fatherly spoke with Dr. Coleman about why kids and parents split, how to heal those relationships, and why some of them can’t be saved.

You have a personal stake in estrangement.

My adult daughter cut off contact with me for several years, in part because her mother and I got divorced and I remarried and had more children. The estrangement from her was easily the most painful, awful thing I’ve ever had to go through. It took several years to reconcile with her but we eventually did.

In your many conversations with estranged parents, did you find that your experience was typical or somehow illustrative of estrangement overall?

Well, I was certainly illustrative of how divorce influences estrangement. Seventy percent of the parents who contacted me had divorce in their past. Divorce can can cause one parent to poison the child against the other. Or it can cause the child independently to blame one parent over the other. Or the child may have to compete with new people for emotional and material resources.

What are some other common ones?

One of the pathways is physical or emotional abuse on the parent’s part. Another common pathway is when the adult child marries and there’s conflict between the son-in-law and daughter-in-law. And then the son-in-law or daughter-in-law becomes a gatekeeper to the parents’ access to their adult child or the grandchildren. There’s mental illness, either on the part of the parent or the child.

The other thing that isn’t talked about as much is the way that our much more careful and conscientious, guilt-ridden intrusive parenting that we’ve adopted over the past four or five decades causes some children to get too much of the parent. Some estrangements are about children trying to get in touch with their own voice separate from that of the parent.

What do people misunderstand about family estrangement?

People usually assume the parent must have done something terribly wrong to be estranged from their kids. And that’s why a lot of estranged parents don’t talk about it. They’re ashamed. But a lot of people don’t realize you can be estranged for other reasons.

The other thing is the role of psychotherapy. Younger generations look at family life as optional. More importantly, [family life] has to occur on a platform of growth and happiness and personal development. So part of the conflict is that the parents are often looking through the lens of respect and obligation and duty and the adult child is looking at the relationship and saying it  has to be a healthy, meaningful relationship. And those are very different moral frameworks.

Psychotherapists are typically more aligned with the personal growth model, which says you shouldn’t have toxic people in your life, including your parents. So it can be an act of growth and strength to cut out your parents and the like. That’s a really common source that isn’t really as well understood.

You write that some adult children seek estrangement because they feel too close to their parents.

I think it’s really common. In my book, I talk about one adult child who had psychological issues, anxiety, depression and ended up having to go to a therapeutic boarding school. The parents were very conscientious and she needed heavy parental intervention. Later, when the child was grown, she cut off the parents. Her therapist alleged that the parents were narcissistic, overly-involved, and overly-intrusive and said the adult child should cut off the parents. For some people, particularly those who carried a feeling of shame into adulthood, estrangement can feel like a way to reclaim the ideal self. It’s a feeling that if they had different parents or backgrounds, they wouldn’t have all these issues.

That can happen even with kids who don’t have psychiatric vulnerabilities. In the past three or four decades, parents were more anxious and more guilt-ridden. And we’re also more educated about all the ways we can screw up our kids. And we’re more psychological. So the good news is that surveys show that the majority of adult children say that they feel pretty close to their parents. And a majority of parents say that they feel close to their adult children. When it works, it works really well. Because parents have been working on being more sensitive and intuitive and responsive and psychological. When it doesn’t work, the child feels like the parents are always walking behind them with a safety net. 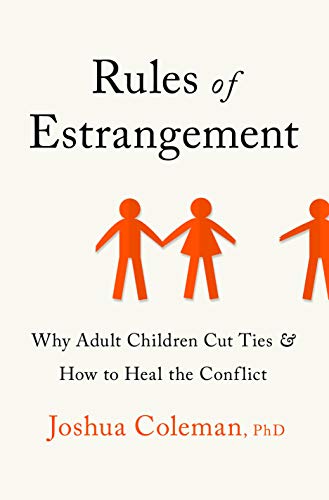 Rules of Estrangement: Why Adult Children Cut Ties and How to Heal the Conflict

You write that adult children pursue estrangement because they’re pursuing a happier life. That must be very difficult for their parents to accept.

No question. One of my critiques of today’s psychotherapy is that therapists believe they have to be in alignment with their clients’ ideals about autonomy and individuation. There’s an idea that you shouldn’t feel guilt or responsibility to anybody. It’s really about what you want to do.

I think that it can be very hurtful. On the one hand, this allows people to separate from truly hurtful, abusive family members. We want people to have the freedom to do that. On the other hand, it doesn’t draw a clear line about what should really be considered abusive behavior. That gives people the freedom to engage in behavior that’s frankly selfish or hurtful in the spirit of personal growth.

You suggest that widespread adoption of language derived from therapy contributes to estrangement.

Therapeutic narratives become the way that we make sense of our lives.  And so parents have been blamed for all kinds of bullshit that’s not their fault. And sure, parents matter. But so do genetics. So do neighborhoods. So do siblings. Just the generation that you’re born into can be predictive of outcome. And it’s important to be aware of that. We live in this culture where everything comes down to what mom or dad do, where everything is presumed to come from a trauma or a parental deficit. In your adulthood, you may have significant depression, anxiety, suicidality, or other kinds of issues. And you could still have had perfectly good, loving even heroic parents.

Not every family is capable of reconciliation. Both parties have to be able and willing and desirous to have that happen.

The child has to see their parents in a more three-dimensional way rather than just through the eyes of their own hurt and to be open to forgiving them for those hurts. To be able to communicate their complaints in a way that isn’t inherently shaming and humiliating of the parent. And for the adult child to have some measure of self-reflection.

But sometimes the parent isn’t able to do it. They’re not willing to make amends, apologize, take responsibility, or show care and concern. The adult child may need to blame the parent for how their lives turned out because they feel so defective and it helps them to not feel like it’s their fault. They may be married to somebody who’s a gatekeeper to the relationship, and that person makes them pay too high a psychological price for staying in contact with a parent. Their own mental illness, or addictions may make it hard for them to know how to navigate the normal slings and arrows of childhood.

Are there early red flags for estrangement? Are there steps that families can take to avoid them?

I certainly think if you’re getting divorced, you need to be aware that it’s fraught territory. Not only of divorce when your children are young, but also so-called gray divorces, divorce that happens at age 50, 60, 70, which are really the highest numbers of people getting divorced today are in that cohort.

A lot of people think ‘my kids are grown. And then I’ll be on easy street because I’ve always been a great dad or a great mom.’ Well guess what? You’re not.

Therapy is also a potential flashpoint. If your kid comes back in the therapy and wants to talk about their childhood wounds or the way that you harmed or abused them et cetera, try to listen from the perspective of learning and not to be defensive, assume that your adult child is telling you these things because they want to improve your relationship with you and not to just humiliate you, how ever much it feels like that. Do not shame or criticize your partner’s romantic choices and your child’s romantic choices either when they’re dating or particularly once they’re married.

If you’re asked to give feedback, be careful, because that can and will be used against you in many instances.

You warn that parents shouldn’t expect that reconciliation from an estrangement to be fair. Why is that important?

It has to do with these different moral frameworks. From the parents’ perspective, they feel owed in a certain way. Particularly parents who have been parenting for decades. They’ll say ‘I was at all your games, I got you in therapy or I paid for your school. I did all these things nobody ever did for me. I’m owed a relationship with you.’ And that just doesn’t fly.

What are best practices for coping with estrangement?

The first thing I recommend is for the parents to write what I call letters of amends, where they take responsibility for the harm they may have caused the adult child. They frankly acknowledge what they did or didn’t do that was hurtful to the child, even if they had good intentions. They need to express a willingness to repair and share what the adult child has to say and to modify their behavior in a way that’s more in line with the desires of the adult child.

But let’s say the parents have already done all that. Then how do they manage? Well, therapy is good. But I think that as a general principle radical acceptance is really good for managing painful things that we have no real power to change and immediate presence.

There’s this great saying ‘pain plus struggle equals suffering.’ The more that we tell ourselves that it’s intolerable, that we can’t have a happy life. In other words, pain is unavoidable. If you’re going through an estrangement, you’re going to feel pain, but the suffering we can avoid.

What’s it like for families when estrangement is over?

Parents have to be willing to accept the new terms and rules of engagement for the adult child, which may be around how much time they’re going to spend with the grandchildren, not being critical, being very respectful of other kinds of boundaries and limitations. But it takes a while for people to kind of get back in the groove; estrangement is such a powerful tear in the fabric of the family.