Why Sleep Training While On Vacation Is Basically A Suicide Mission

The following was syndicated from The Huffington Post as a part of The Daddy Diaries forThe Fatherly Forum, a community of parents and influencers with insights about work, family, and life. If you’d like to join the Forum, drop us a line at TheForum@Fatherly.com.

The thing about a vacation with a baby is that it’s not like those vacations you had before, in Jamaica, Paris, the British Virgin islands, Rome and London, where you slept in, drank booze, and did what you wanted, when you wanted.

This is our first vacation with Lev. We are at my family’s place in Prince Edward Island. This is a piece of land that means a lot to me because I’ve been coming here for 40 years, every summer since I was a kid. My father bought the property a few years after the Cuban missile crisis when he and Alan Alda joined forces and decided to form a commune to get as far away from likely targets of a Soviet attack as possible. (This was long before M*A*S*H made Alan Alda famous — at the time he was just a struggling actor and happened to be our neighbor and a friend.) My father was dispatched to search for a suitable place to build a utopian new society that could withstand the impending nuclear holocaust. He left New Jersey and drove north, thinking maybe he would stop in New Hampshire, Vermont, Maine or Nova Scotia, but he kept driving, alone through the night.

What he found, in Prince Edward Island, was a large piece of waterfront property, which he bought for a pittance. The idea of the commune that would survive WW3 soon fell apart with various beatniks arguing about who would wash the dishes and how childcare duties would be divided, but on the upside, every summer since then, my family has spent July and August on this remote private slice of paradise which we have all to ourselves. It’s not only far away from the bustle of New York City, it’s like traveling back in time. 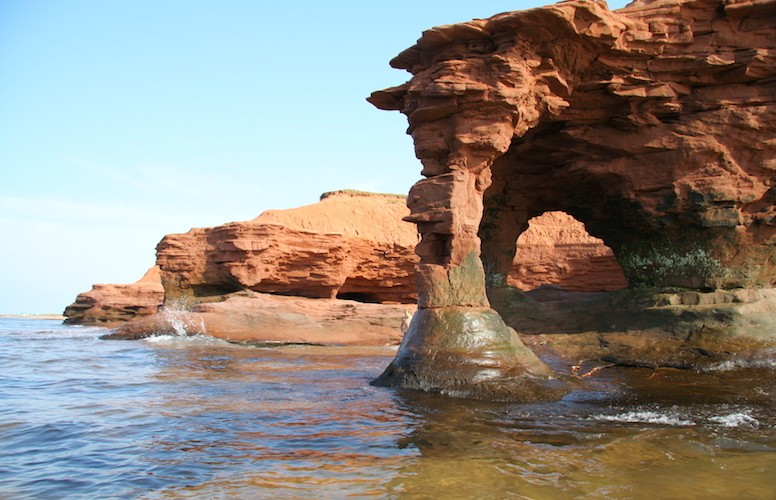 Bringing Lev to Prince Edward Island was laden with meaning for me: it was the place where I spent my childhood summers, and the property is scattered with markers and totems of my life’s milestones. Every father has some version of this experience — whether it’s playing a favorite Rolling Stones album or showing your kid a Marx Brothers movie — you just pray your child will love the stuff you loved as a kid. And fortunately, Lev went absolutely bonkers for Prince Edward Island: he ate wild blueberries we picked in the front yard, learned to crawl in the exact same spot where I learned to ride a bike, and when we dipped his tiny feet in the pristine waters of Saint Mary’s Bay, he squealed like it was the moment he’d been waiting for since his previous life.

We took the entire month of August off to spend on the island, and from the first day it was perfect: warm water, blue skies, and that air, tingling with the scent of bay leaves and pine and salt water. Of course, when you go on vacation you could bring your nanny along, but we didn’t. Mistake.

At this point, we were buried headfirst in the parenthood adventure and doing fine. Except that when I couldn’t find my phone, it turns out I left it in the fridge. And I once woke up in the shower fully dressed. Every night, Lev takes a huge chomp out of the sleep period and then wakes up at 6 AM like he just gulped 10 cappuccinos and is ready to celebrate.

So we gave in and called a sleep specialist. A baby whisperer. Someone who will help the baby learn to become what’s called an independent sleeper. There are many approaches. One is called the Ferber method. This is either named after a guy named Ferber or a combination of Gerber baby food and the F word. It involves barricading yourself in a room for a week while you listen to the person you love most cry hysterically all night, because you have broken a sacred bond and changed the rules of the game.

The rules used to be, the baby cries, we woke up and fed him. About a month ago, we changed that arrangement and stopped feeding Lev at night. He took that surprisingly well, because we replaced the heroin of breastfeeding with the methadone of hugging.

Every father has some version of this experience — whether it’s playing a favorite Rolling Stones album or showing your kid a Marx Brothers movie — you just pray your child will love the stuff you loved as a kid.

So now each time he cries during the night, all he needs is to be picked up, held for somewhere between a few minutes and a half hour, and he will happily fall back asleep. The problem with this arrangement is 2-fold: one, when the solution was breastfeeding, only Michelle had the good stuff, so I couldn’t be faulted for burying my head under the pillows. Now that he’s moved on to the soft drug of love and hugs, both parents are qualified dealers.

The other problem is that while it works for him, it makes a mockery of what morning used to be. Morning used to be the time when I woke up and felt like getting out of bed since I was done sleeping. Now it’s a time I feel like crawling into bed because I feel like someone has been beating me with a bat all night.

In any event, the Ferber method was ruled out after I suggested we let Lev cry it out and Michelle looked at me like Linda Blair in the exorcist, making it clear that I would be the one crying, not Lev.

And so today, like most days, at the first hint of sunrise, Lev clambered into our bed and onto my chest and wriggled for a while, using his legs to do a series of short violent squat thrusts, forcing himself upward towards my face, like a combination inchworm and tiny drunken Scotsman desperately attempting to head butt you in the face. Owing to his youth, the fontanel at the top of his skull is still soft, and I worried that as he rammed his head into my face he might get hurt in the brain. So I lifted my chin up and allowed him to ram the top of his head into my throat. The boy started adding a loud fart with each skull ram to the throat. Then he silently worked his little fist of near my face and stabbed his thumb down with leopard like speed, missing my eyeball by the width of a lentil. 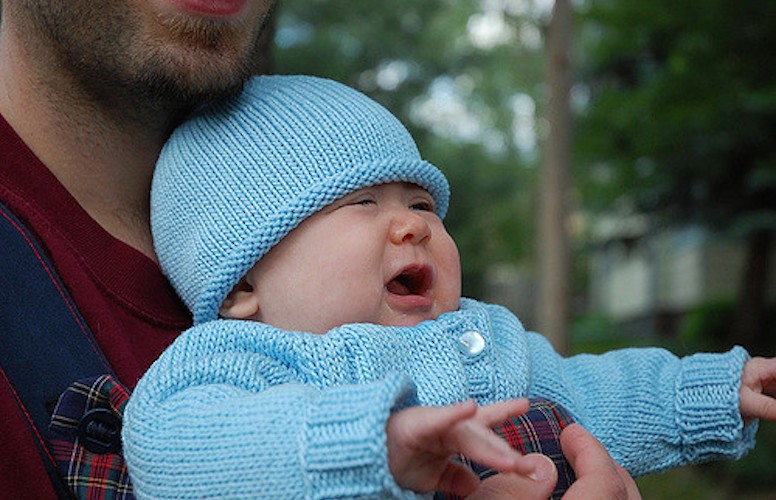 I asked Michelle, who had been enjoying a nice long 45-second nap, if she felt like waking up and taking Lev somewhere far, far away. She’s a kind-hearted woman but shot me the exact same look a feral raccoon gives you when you come upon one ripping your garbage apart, ie., “Would you prefer to let me continue doing what I’m doing or have me rip your balls off with sharpened raccoon teeth?” I held the boy some more, wincing silently with each surging thud of his skull against my windpipe, and watched the light outside the window slowly turn from gun metal blue to the color of a yellow bruise.

Later, when I got up and looked in the mirror, instead of my face, I saw a large crenellated matzo ball with a few grey wires stuck tenuously to the top and sides where my hair used to be, bloodshot eyes mounted at uneven locations near the nose area.

We will need a vacation after this vacation, but hey — only 18 more years to go. And if nuclear war with Russia breaks out, at least we can get some sleep.

Dimitri Ehrlich is a multi-platinum selling songwriter and the author of 2 books. His writing has appeared in the New York Times, Rolling Stone, Spin, and Interview Magazine, where he served as music editor for many years.