The Definitive Glossary Of Sleep Training Methods, From Co-Sleeping To No Tears

Sleep training can be one of the most baffling, frustrating, and difficult early childhood experiences for any new parent, but hell if it’s not one of the most important to nail. Because, while your kid is capable of sleeping 8-12 hours at a stretch by around 4 months, unless that that stretch aligns with your bedtime, you’re shit outta luck. There are a number of approaches most parents use, and it bears repeating something you’ve probably heard plenty of already: every baby is different and no one solution works for all kids. There’s also the “Samuel L. Method,” which you might want to know about just because it’s hilarious, if not particularly likely to work: “No, I can’t stop yelling, tiny baby, cuz that’s how I talk! Now, go the f–k to sleep!”

Co-Sleeping
Co-sleeping isn’t so much sleep training as a sleep practice that’s popular around the world … and ruined this guy’s life. But don’t be dissuaded by one guy (or the American Academy Of Pediatrics — what do they know?). This other guy loves it! Plus, some studies suggest co-sleeping increases parents’ responsiveness, decreases stress hormones, and promotes long-term emotional health. It definitely improves your odds of getting kicked in the face at 3:00 a.m., and being roundly mocked by all your friends.

The Extinction Method
Not at all what it sounds like … and arguably worse. The extinction method, popularized by Dr. Marc Weissbluth is the most extreme form of the larger “Cry It Out” school of sleep training. Weissbluth basically says that you cuddle the kid, kiss them goodnight, shut the door, and … that’s it. The kid cries a bunch, exhausts themselves and passes out. This sounds like torture and, depending on how long it takes your kid to pass out, it can be. On the plus side, once they fall asleep they often stay asleep, and proponents claim that you only spend 2-4 nights feeling like the worst person ever before your kid learns to sleep through the night and you get to smugly judge al the really sleep deprived parents at the playground.

Fading Or The Chair Method
Happy medium for parents concerned about the harshness of Cry It Out and the coddling of No Tears, or just too exhausted to choose one. Fading starts with rocking or comforting your baby to sleep in your arms; over time, you begin putting them down when they’re nearly asleep, then just drowsy until, eventually, they know they get one round of “3 Little Birds” and you’re out. The Chair method involves sitting in that comfy-ass chair beside the crib and giving a “Shh” or back pat if they fuss. Sit slightly farther away each night until they don’t notice that the breastfeeding glider is in the living room. 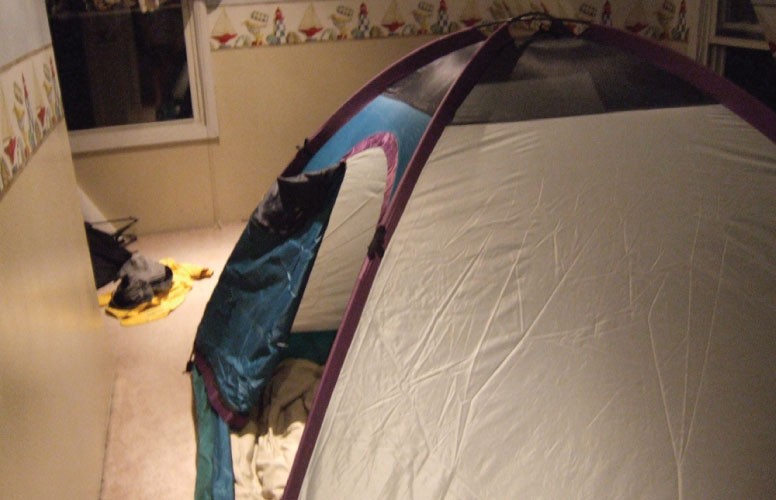 Ferberizing
A kinder, gentler Cry It Out method popularized by Dr. Richard Ferber’s 1985 book that was so popular, no one noticed that turning it into a verb sounds vaguely like something you do to a dog that sheds too much. To be fair, Ferber never actually used the phrase; it’s a catch-all for any approach wherein babies cry for some time period before being comforted. They range from Ferber’s progressive-waiting technique, to Baby Wise, where you create the schedule and force Junior to adapt. All of them acknowledge crying is inevitable; all of them also acknowledge that you’re not a soulless monster and shouldn’t be expected to listen to your baby wail for hours on end.

Karp Method (“Happiest Baby”)
No, this doesn’t involve knocking your kid unconscious with a flying, invasive river fish, you sick, sick monkey. Harvey Karp’s bestseller outlines his “Five S’s” of sleep training (you should recognize several):swaddling, side or stomach position (for soothing, not sleeping), shushing, swinging, and sucking. These work during proper sleep training months, but are meant for the first 6 weeks; Junior won’t sleep through the night but will start recognizing a bedtime routine. And fit in a swaddle.

No Tears
Popularized by Dr. William Sears and outlined by parent educator Elizabeth Pantley.Essentially, you nurture the kid to sleep gradually through rocking, feeding, and other forms of physical closeness, and run in there hella fast to comfort them at the first whimper. It’s literally less of headache than Cry It Out and makes for loads of late-night cozy time, but requires more vigilance from you and has been criticized for making kids helplessly dependent and turning parents into helicopters. Maybe it’s more like, “No Tears … Yet.”