The 2019 Flu Season Will Suck for America (Just Ask Australia)

Australians are sneezing and coughing and getting hospitalized. Now is the time for American to get their shots and brace for a really bad influenza season.

Since early this year, it’s been apparent the 2019 Australian influenza “season” was going to be different. Normally, the flu season coincides with the winter months of July and August, sometimes stretching to September and October.

But this year, things have happened much earlier, with a record number of influenza cases reported in summer and autumn.

So what’s been happening and is it really as bad as the media have been reporting? Here we look at some of the latest data on cases and their outcomes to see if it is indeed “a horror flu season.”

The impact of influenza on the community is measured in several ways. The most basic measure is to simply count the number of cases of people presenting to their GP with influenza-like illness.

Sometimes the doctor will take a swab, and these are tested in the laboratory to confirm that influenza virus is present (it’s possible another respiratory virus or bacteria might be causing the flu-like symptoms).

Cases of influenza-like illness were increasing in early March, peaked in early June, and are now decreasing. Laboratory-confirmed cases (the results of which we see in the above chart) show a similar trend. We haven’t included July in this chart because it’s not finished yet, but we’re still seeing a high number of cases into July.

Compared to previous years, 2019 looks like a big year with more than 120,000 cases of lab-confirmed influenza up to the end of June. But it’s not nearly as bad as 2017, which had more than 250,000 cases reported to the National Notifiable Diseases Surveillance System (NNDSS) by the end of the year. As this season occurred much later than 2019’s, 2017 had only 24,000 cases reported up to July 7.

The good news is that as the 2019 season started earlier, it’s also likely to finish earlier than usual. This is because once the main influenza season starts, it usually ends around 12-16 weeks later, when the number of susceptible people drops below the level required to maintain efficient circulation. 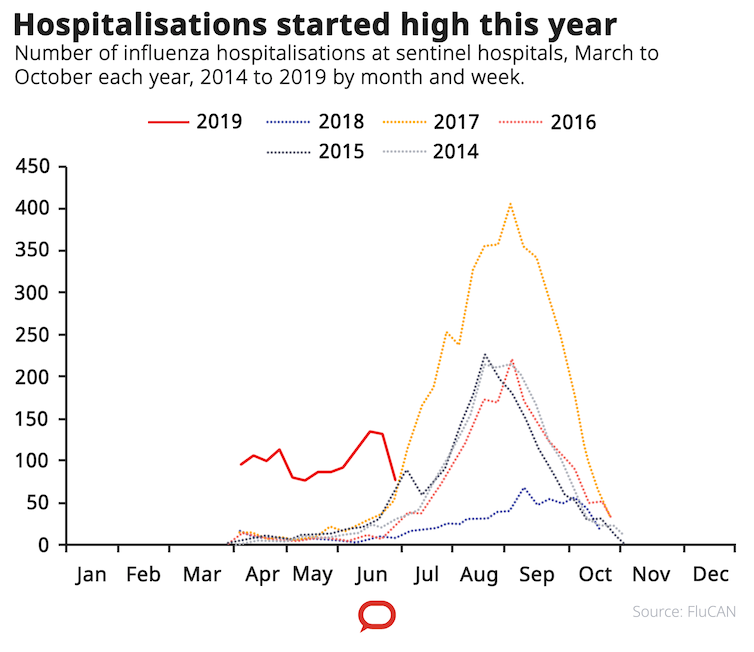 Another measure of how severe the influenza season is can be gauged by the number of hospitalizations, including admissions to ICU (intensive care units).

Hospital admissions show from April 1 to June 30 this year, there have been 1,309 admissions to the Australian sentinel surveillance hospitals (a number of hospitals where flu admissions are tracked each year).

This figure is much higher than in previous years at the same time point. In 2018, there were 90 admissions, and in 2017, 311. But in 2017 the season arrived much later and more seriously and ultimately resulted in 3,969 admissions for that year.

The 2019 ICU rate is at the lower end of historical figures which range from 8.7 percent in 2015 to 14.2 percent in 2013. By this measure, the 2019 season is of a similar severity to that seen in previous seasons and is therefore not exceptional.

While hospital admissions can be measured relatively easily, measuring deaths due to influenza is more complicated for a few reasons. The flu often paves the way for secondary bacterial infections, like pneumonia, which can lead to hospitalization and death, particularly in the elderly. When this happens, it can be difficult to link death directly to an earlier influenza infection.

And, death data is often very delayed. So readily available death data collected by the NNDSS is considered a significant underestimate of the actual number.

To the end of June 2019, there were 231 influenza-related deaths reported to the NNDSS. Virtually all of these were due to the influenza A strain. They spanned all ages, but most deaths were in the elderly (80 years and older).

Clearly 2019 is more severe than 2018, based on the measures detailed above, but, at this stage, it looks like it will be less severe than 2017. However, we’ll need to wait for a number of weeks yet to be sure.

When we look at what’s happened in each state of Australia so far this year, we see some interesting differences in how the season has played out. Most states began to see significant rises in cases in April, while South Australia had already peaked in April and this number of cases was maintained into May. This means that most other states still have a number of weeks of influenza circulation to endure.

At this stage, we can conclude that the 2019 influenza season is quite different from our usual seasons and overall, is likely to be one of the more severe seasons seen in the last 20 years.

So while 2019 doesn’t appear to be the worst season we’ve ever seen – that’s likely to remain with 2017 – it may well run a close second place. But we’ll have to wait another month or two before we can be sure.

This article was originally published on The Conversation by Ian Burr, Deputy Director of WHO Collaborating Centre for Reference and Research on Influenza.

ADVERTISEMENT
ADVERTISEMENT
More From Health & Science
Behavior Dopamine Fasting Can Make You a Happier, More Focused Man
Fitness Core Strength in 15 Minutes: An Easy Ab Workout
Development Why Are So Many Babies Getting Tongue Tie Surgery?
Fitness The Best HIIT Workout You Can Do in 15 Minutes
Nutrition Does Intermittent Fasting Work?
Sickness & Allergies Will Going Out in the Cold Give You a Cold?