Less food on the floor, more food in their mouths.

Quick confession: I let my toddler drink her cereal milk out of the bowl. I do it (and didn’t want to stop), and I rightfully assumed she’d follow my lead anyway. Plus, who wants to sit there and watch a 2-year-old slurp tiny spoonfuls of milk for 40 minutes. Manners be damned, I’ve got to get to work.

You can imagine, however, how those first couple of episodes went. “Go sloooow,” I would say, only to watch her dump a bowl of milk on her face. Hilarious for sure, but also a screaming mess. Or it should have been. Somewhere around 12 months, though, my wife bought what I’ve since proclaimed is one of the greatest baby/toddler feeding products on the market: the silicone bib.

If you don’t know, silicone bibs are those soft rubbery shirt shields with a protruding pouch along the bottom ⏤ known as crumb catcher. They’re waterproof and wipe clean, they bend and flex, and there’s no shortage of companies that make them, from Summer’s Infant to Baby Bjorn to OXO. A quick search of Amazon will pull up enough that you’ll find yourself engrossed in reviews of bibs when you should be buying your wife a birthday gift or something. We happen to use the Tommee Tippee variety, the Easi-Roll Bib, and that’s probably because it was cheap. Maybe because it was on Prime, I’m not sure. 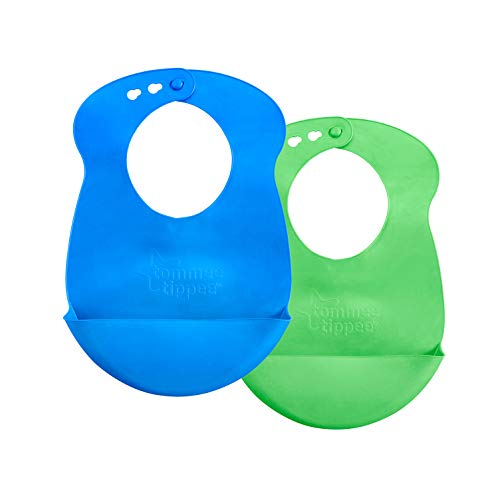 The bibs are easy to wash in the sink or dishwasher and as some online commenters have noted: they don't stain or smell moldy. Which I would agree with. They're also crazy durable ⏤ we're still on the first pack we purchased more than a year ago. Oh yea, you can also dump a cup of milk down the front and they'll catch most it. I mentioned that, right?

Now, our road to the silicone bib was not a straight one. As most new parents, we both received hand-me-downs and registered for gear we’d never tried. Bibs, of course, we’re in the mix. We started with the soft cloth kind that needed to be washed in the washing machine ⏤ which, in retrospect, is absolutely nuts. Why do these even exist? From there we tried everything from IKEAs full-throated rain jacket/artist poncho ⏤ great for finger painting, less so for meals ⏤ to those cloth/vinyl hybrids with Velcro latches the kids easily yank off and pocket at the bottom that stays flat and catches nary a crumb.

Obviously, you can look at pictures of silicone bibs and figure out why they’re awesome: they have a marsupialian pouch that catches the damn food before it hits the table, much less your hardwood floors. Considering one of the biggest problems kids have with eating is getting food into their mouths, the concept makes tons of sense. I’d also argue it’ll save money on groceries, but let’s be honest, even those chicken nuggets that hit the ground go back on the plate, right? Our daughter has become adept at eating out of the bib’s pouch, and as friends have noted, it’s like you get a second dinner by the end of the meal. Better still, at least with the Tommee, the sliding latch locks it around her neck. She hasn’t had nearly the luck pulling them off as she did other bibs.

Of course, no product is perfect. Despite being billed as “easy to roll up” for travel, they oddly don’t pack as well as say a cloth bib. They just don’t. They’re also a bit unwieldy to dry ⏤ I often hang them over plates on the rack and they almost always fall off ⏤ and I sometimes find food stuck in the pouch the next day. My wife would argue that’s more a commentary on my dish washing, and she’d be right, but nonetheless ⏤ food can stick to them.

Some online reviewers also claim they’re not as comfortable as other bibs, but it’s unclear whether their nine-month-old told them that or they’re injecting their own biases. And finally, I’d normally point out that they’re more expensive than other bibs, averaging between $10 and $20 per pack depending on the brand, but they are available online for as little as $6. And since other styles of bibs cost as much if not more, I’m discounting price as an argument against.

None of these reasons, by the way, would in any way dissuade me from ever changing bibs. Don’t be silly. The only conceivable reason to ditch the silicone in my mind is if your kid puts it on and immediately breaks out in hives. Otherwise, using another bib simply doesn’t make any sense to me.

That said, much as I did when extolling the virtues of the 360-degree toothbrush, I’m quick to point out that this thing isn’t a panacea to cure all of your mealtime woes. We are still talking about toddlers eating. The table is far from pristine, food still ends up everywhere, and I’m on all fours under the high chair after every meal. But, in the grand scheme of things, it could be a lot worse. If somebody can make a case for another bib, I’m all ears. I’m just not sure there’s one to be made. Especially when my daughter’s dumping milk on her face.