Summer is water-gun season, and these are some of the best.

To have a perfect water experience, you need a perfect water gun, squirt gun, and water blaster. Sure, learning to swim is essential. But we all know that the best water-based artillery will make them the aquatic kings of the neighborhood (and you a hero for equipping them).

From recurve-bow-style guns that shoot both waterlogged arrows and water streams to bike-based turrets and clip-based blasters, the latest and greatest aquatic weapons offer a range of soaking styles. They’re so fun your kids will want to use them all summer, so be prepared to confiscate their weaponry once the leaves start to turn. 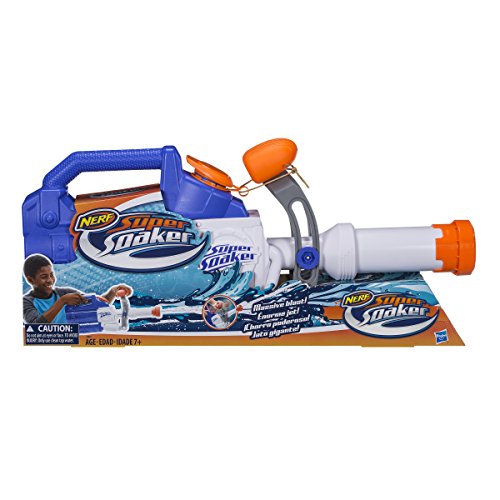 Instead of a classic pump-and-trigger system, all your kid has to do is move the handle back and forth on this water gun. No trigger necessary.

Pros: The Soakzooka has a 1.6-liter tank located near the rear. The tank is easy to fill thanks to a large opening that’s tilted upward, with a cap that cleverly flips up instead of unscrewing so there’s no chance of it getting lost in the heat of aquatic battle.

Cons: We’re not saying it’s the smallest, easiest to handle water gun out there. 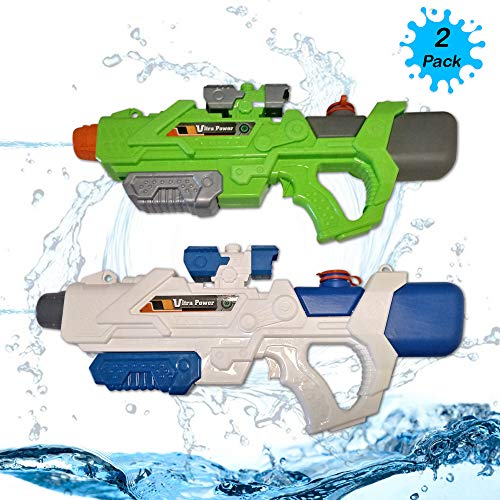 Pros: These guns are small but mighty, with a 32-foot range and 1200cc capacity. They’re easy enough for kids as young as three to handle.

Cons: The guns are great, but also pretty basic. 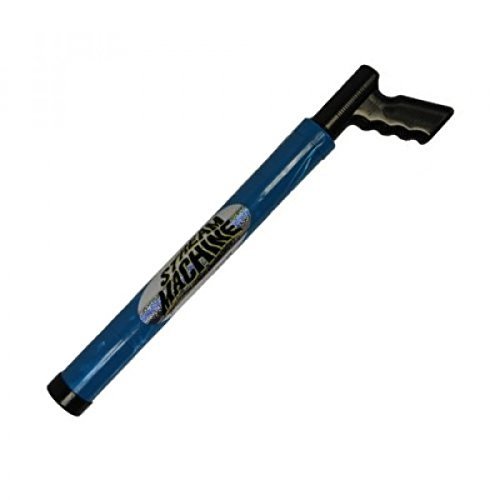 This water gun as one job at which it excels: It shoots a stream of water 70 feet.

Pros: The 29 inch water gun blasts water up to 70 feet. That’s a lot of water. And a lot of feet. Because of its striking power, it’s recommended for kids eight and older.

Cons: This things needs to be refilled fast and often so it’s best used in the pool. 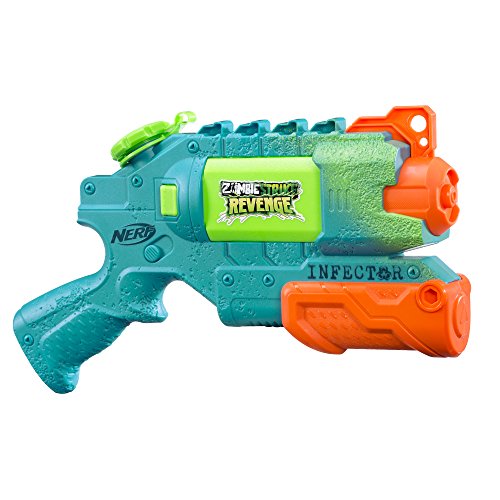 When you pump to fire this water gun, it blasts water up to 38 feet.

Pros: You get a sizable tank with this water blaster, holding 12 fluid ounces of aqua.

Cons: We do wish it held more water. But its range is on point. 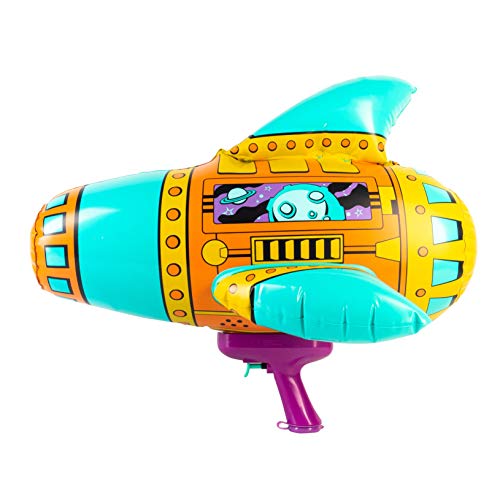 This space ship blaster is an inflatable hybrid water blaster that uses trigger action and has a 1.5 ounce water capacity outside the pool. In the pool, just keep shooting. It measures up to two feet when inflated.

Pros: Great for kids five and up, this inflatable water blaster looks cool and works in and out of the pool. It shoots water up to 15 feet, and has simple trigger action to get things going.

Cons: Things that inflate also deflate. So beware of holes.

This awesome water blaster is inspired by the blaster used in Fortnite Battle Royale, and is ready for serious aquatic action.

Cons: It’s on the heavy side, even without water, so it’s better for older kids. 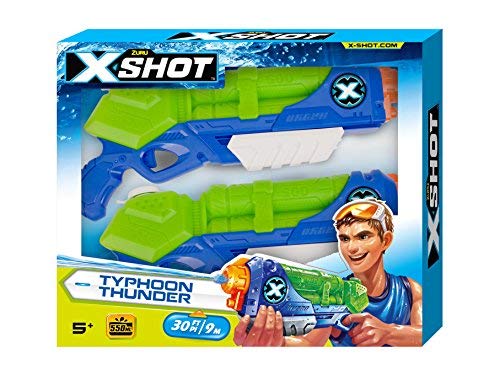 Defeat your water opponents with the Typhoon Thunder, which lets you blast water up to 30 feet.

Pros: You’ll rule the pool with this water blaster, which has a large capacity tank that holds tons of water so you can keep going and going.  These water guns are not trigger pull blasters, so they’re great for younger kids, one and up. 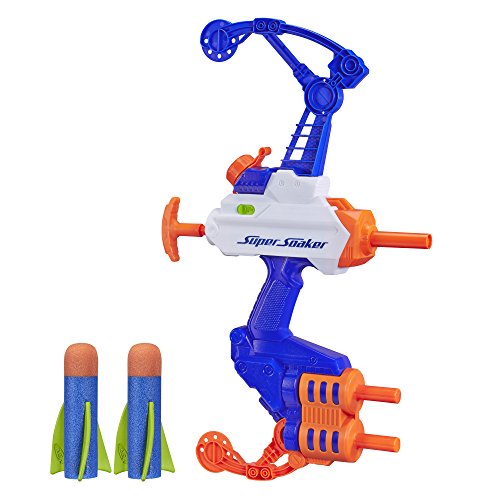 For when you want to do your best Legolas or simply add a little extra flair to your aqua blasting, there's this bow-shaped Nerf-Super Soaker combo. Pulling back and releasing the trigger shoots both streams of water and arrows (dunk the suckers in water to create a soggier projectile), both of which fly up to 30 feet.

Pros: Those chunky missiles come in a pair and are brightly colored so they’re less likely to get lost in the midst of water gun warfare. The shape of the weapon is also unique, and we mean that in a good way.

Cons: Soaking the darts takes some time, and this thing only holds 22 ounces of water so it’s better for shorter engagements than epic water wars. 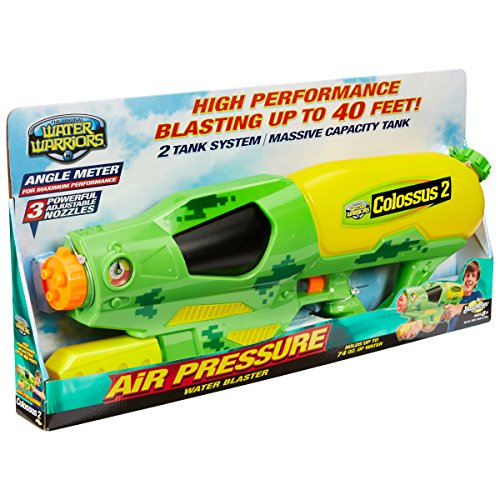 Consider this a modern-day upgrade to the pressurized guns of your youth. Yeah, it has the same shell, but nice upgrades abound: There's a pressure gauge on the front so you know when it's fully ready to fire streams up to 40 feet; its nozzle is adjustable, giving you three different spray styles with a simple twist.

Pros: This blaster can hit targets up to 40 feet away, so your kids can get the neighbor kids from the treehouse in the backyard. It has a two-tank system with a solid 74 ounces of total capacity. The angle meter shows how much pressure your kid has built up, with different colors of short, moderate, green, and maximum distance. The cap is attached to the tank so your kid won’t lose it.

Cons: A 2-foot-long gun that holds over half a gallon of water might be unwieldy for smaller kids or those with less upper-body strength. 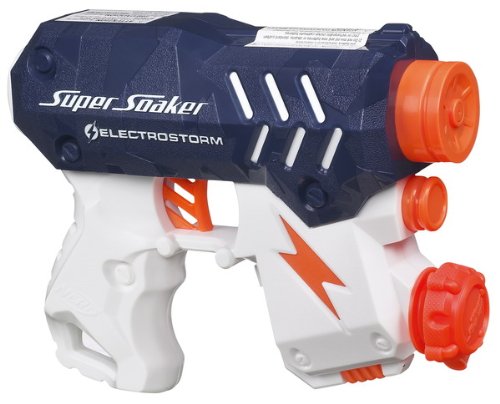 Its name sounds kind of dangerous, but it refers to the fact that this blaster is powered by electricity (not that it will electrify your kid or their opponents). It's a compact blaster with remarkable stamina that makes it unique among the guns on this list.

Pros: The battery-powered pump can fire a single stream for up to 15 seconds, so your kid won’t have an issue completely soaking their opponent. It also fires a respectable 25 feet, no pumping required.

Cons: It uses four AA batteries, which is kind of a lot. There’s also the small size, which some kids won’t like despite the portability it offers. 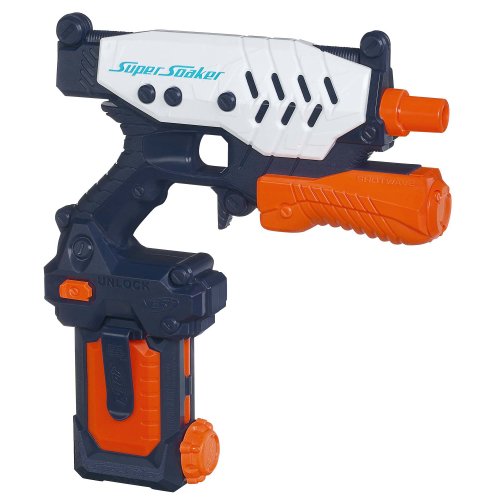 The big feature here is the clip system. Instead of an undetachable tank that requires kids to bring the whole gun in to be refilled, the Shotwave uses removable clips that hold 10 ounces of water each.

Pros: There’s a belt clip included that lets your kids walk around with their next water clip ready at a moment’s notice. The reloading process is fast, and a few pumps on the oversized handle is all you need to fire this blaster, which has a range of about 25 feet.

Cons: Each clip only holds 10 ounces, so you’ll probably need to invest in more for longer battles that really take advantage of the system. 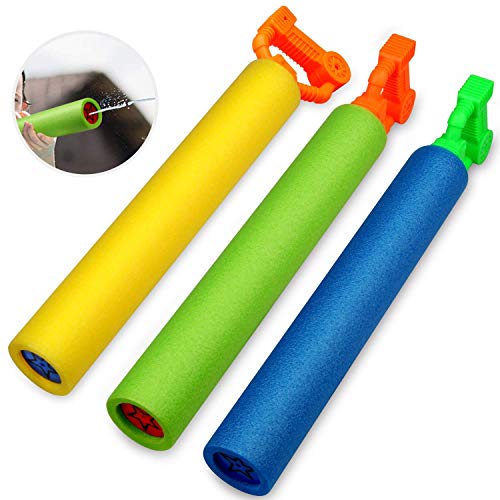 These water launchers are fantastic if you or a generous neighbor has a pool. Instead of a tank that's designed to be filled with a hose or sink, they just need to be submerged and extended to suck up water and compressed to blast it away.

Pros: Operation couldn’t be easier — extend to load, compress to unload — and kids will have a lot of control over how much water they fire and how far it goes, up to 30 feet if they really go for it. It also has a foam barrel, so if your kids accidentally (or…not so accidentally) hit each other with them, the risk of injury is pretty low.

Cons: Of course, if your kids don’t have access to water where they can easily submerge this thing, there isn’t much point, as it’s nearly impossible to fully load it otherwise (i.e., like a traditional water gun). And if you find yourself on a beach trip, be aware: Sucking rocks or sand into the barrel can cause permanent damage to the soaker. 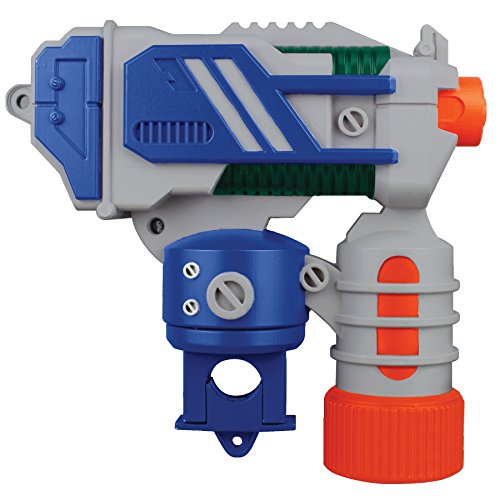 Water shootouts are way more fun when they’re of the drive-by variety. This turret mounts to your kid's handlebars and oscillates 180 degrees to for maximum soakage. Controls sit near the rider's thumb — bike-chime-style — so kids can fire blasts and still steer themselves away from any retaliation.

Pros: This thing is just a great idea. It’s a unique item that turns your kid’s bike into a mobile water-blasting machine. It’s battery-powered so your kid can focus on pedaling and firing, not pumping.

Cons: The tank is on the small side, so your kid may want to make sure the water bottle on their bike frame is full for easy refills on the go. You also might want to talk to your kid about protecting their bike chain from rust, as it seems likely that the entire bike gets soaked if it’s part of water warfare. 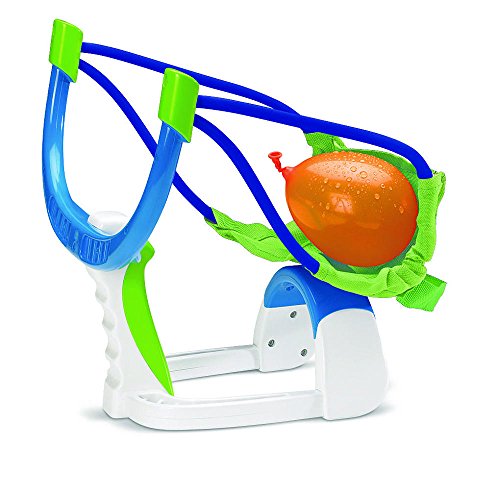 Perhaps long-range warfare is more your — or your kids' — style? This launcher is engineered to swaddle and then fire plump water balloons. It comes standard with 50 balloons, which should be enough to at least start a pretty epic battle.

Pros: It’s a lightweight (1.18 pounds) launcher that makes it easy to fire water balloons without throwing out a shoulder. It comes with a special nozzle that attaches to your hose and makes filling balloons easy.

Cons: Water balloons mean tiny pieces of rubber all over the battlefield, so be careful where your kids use these.

Finally, a Fortnite-themed water gun that can get your Fortnite-loving kid out of the house.

Pros: It looks just like the blaster used in the popular game and is easy to fill by submerging the tip in water and pulling the handle back.

Cons: We’d like a more traditional loading mechanism for those times when your kids need to reload with the garden hose. 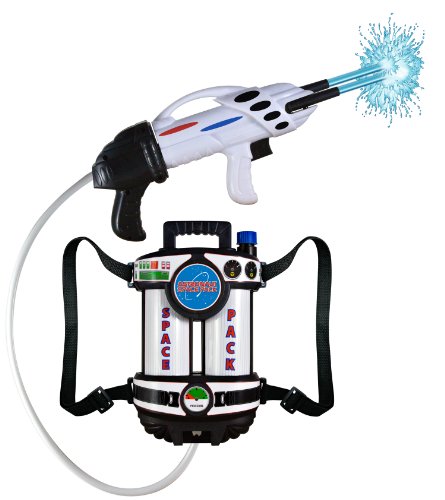 For kids with strong backs who love space and soaking their friends, consider this pack-based suds shooter. The twin tank reservoir holds two liters of ammunition, which is fed via a hose to the Star Wars–ian blaster. Speaking of the blaster, it sports dual nozzles for double the soakage.

Pros: This blaster can shoot water over 30 feet with a single pump. The twin tanks hold a full liter of water, so your kids can have longer battles with their friends in between refills.

Cons: The branding on this thing is space-themed, which is kind of bizarre. There’s an option that moves the nozzles 45 degrees in each direction when you shoot, but we’re not exactly sure how that’s a useful feature. 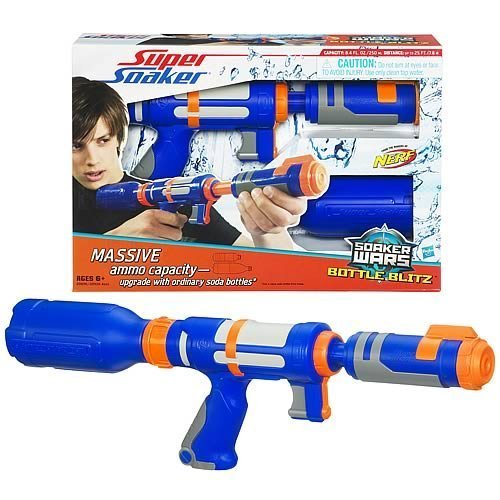 This sturdy, purple and orange pump-action water gun is nice and slender, and it weighs less than a pound, so it's super portable. If you find yourself needing extra capacity it can easily be expanded to at least two liters thanks to a clever design that lets you attach a soda bottle full of water.

Pros: You can attach empty bottles, a convenient and inexpensive way to add serious capacity to this weapon. And as long as it has a standard-width opening you can attach a bottle of any size, so you could even put a variety of bottles, prefilled with water, in the garage to serve as a sort of armory for the most epic water gun battles your neighborhood has ever seen.

Cons: Soda bottles add a ton of capacity, but they also make for a damn heavy blaster. But without the bottle attached, this thing doesn’t hold enough for more than a few quality squirts.

ADVERTISEMENT
Oops! Something went wrong. Please contact support@fatherly.com.
Thank you for subscribing
Give us a little more information and we'll give you a lot more relevant content
Your child's birthday or due date
Add A Child
Remove A Child
I don't have kids
Thanks For Subscribing!
Oops! Something went wrong. Please contact support@fatherly.com.
Commerce Product Roundup super soakers water balloons Water guns
ADVERTISEMENT
ADVERTISEMENT
More From Gear
Gear These Miracle Hoka One One Sneakers Cured My Back Pain
Baby Meghan Markle Toted Baby Archie In This $140 Ergo Baby Carrier
Baby These Two New Smart Bassinets Will Rock Your World
Sports Working Out at Home Sucks. It Sucks a Lot Less With a Balance Board
Gift Guides This Gift For Your Wife Will Get You Laid. That's the Point.
Home This Handmade Foosball Table Will Take Your Man Cave to a New Level