Reading is fundamental — TV taught you that. But, if your preschooler or kindergartener has yet to put words into sentences, sentences into paragraphs, and paragraphs into great American novels, you may want to grab one of these spelling and reading apps for smartphones and tablets to get them started. Don’t feel bad about leaning on technology to help them succeed — after all, you lean on technology for everything else.

RELATED: The 12 Best Educational Apps For Back To School Time

The good folks at Common Sense Media know that you don’t have time to play all of these (and if you do, what the hell is your kid doing?). Which is why they seek out and vet apps that actually put some nutrition in your kid’s digital diet. Here are the best spelling and reading apps that will get kids to understand the meaning of the word, “word.”

Rapids is a monthly subscription-based reading app from Amazon designed to get kids hooked on words … which eventually live on Kindles. It has a library full of illustrated short stories that your kids read, “like you would a chat on your phone.” Yes, the characters essentially talk to one another via text bubbles. Before you start shaking your cane telling Rapids to get off your lawn, think of it like a high-tech comic book. Still not convinced? Hey — they’re reading.
Ages: 7-12
$2.99 per month (iOS) (Android) (Fire) 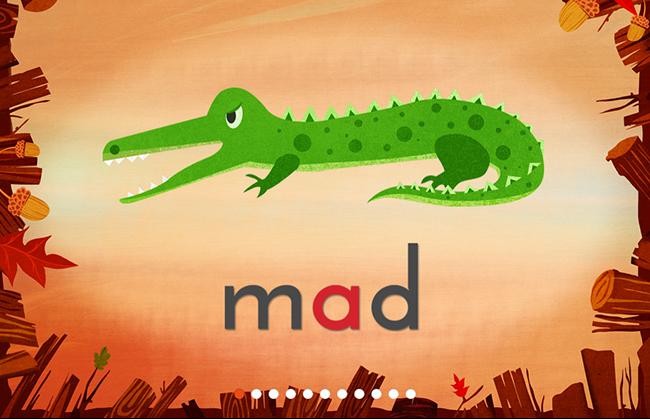 Even though a Simpsons early education app would be more fun, Learn With Homer will do a better job teaching your kid how to sound out words. (Doh!) Unleash your kid’s reading abilities using Homer’s speak-and-spell animation and voice recordings that give them feedback on pronunciation. The reading app also targets younger kids struggling with speech and language issues, and allows adults to keep tabs via progress reports. Just like how your company monitors your Facebook time.
Ages: 3-6
Free (iOS) 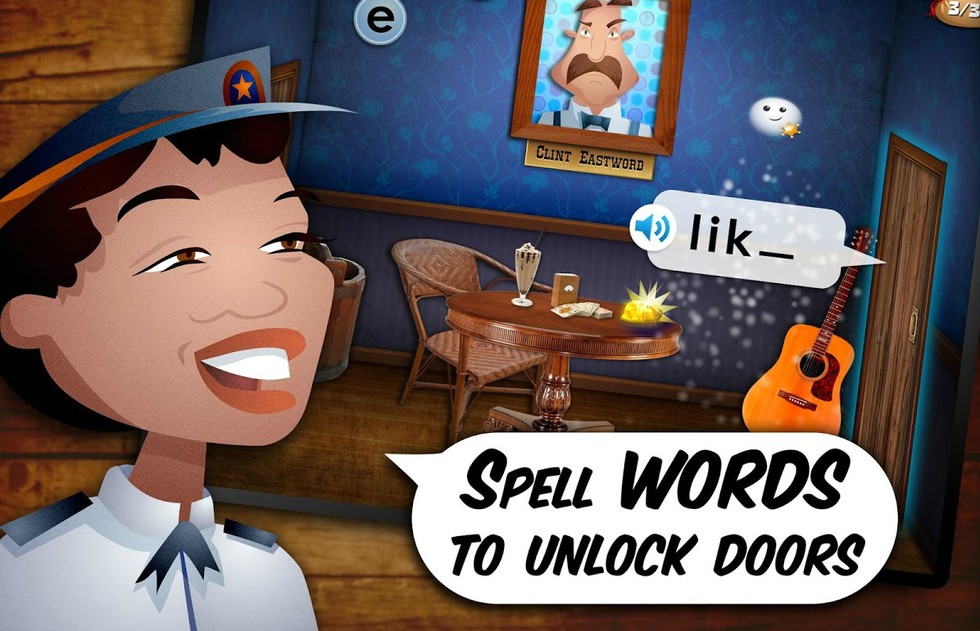 Where In The World Is Carmen San Diego taught a whole generation that geography and good detective work go hand in hand. Mystery Word Town uses that same “gumshoe” conceit by getting players to solve crimes and learn to read at the same time. (Although if you can’t read, you’re probably a shitty detective.) The stakes in this reading game are high, because if a word isn’t spelled correctly, a bank robber could get away. And then the chief will really have your A-S-S.
Ages: 6+
$2.99 (iOS) (Android) 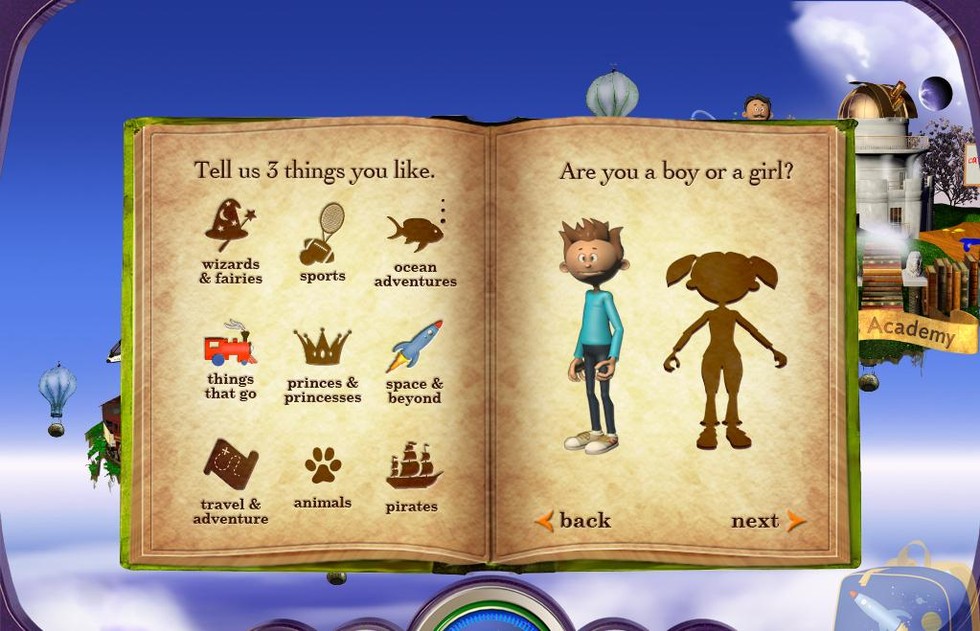 Take a look, it’s in a book — except it’s not a book, it’s an app. Before you have an existential crisis in front of your kid, know that they can still “go anywhere” (even if it’s not as high as a butterfly). This app features a kiddie Kindle of books that are targeted at specific interests. Wizards? Pirates? Princesses? Once they pick, little readers can decide to either read the story or have it read to them. You can subscribe for a monthly fee for more book options. If you want LeVar Burton to stop by personally — that’s not an option.
Ages: 4+
Free (iOS) (Android)

Cat In The Hat Read And Learn 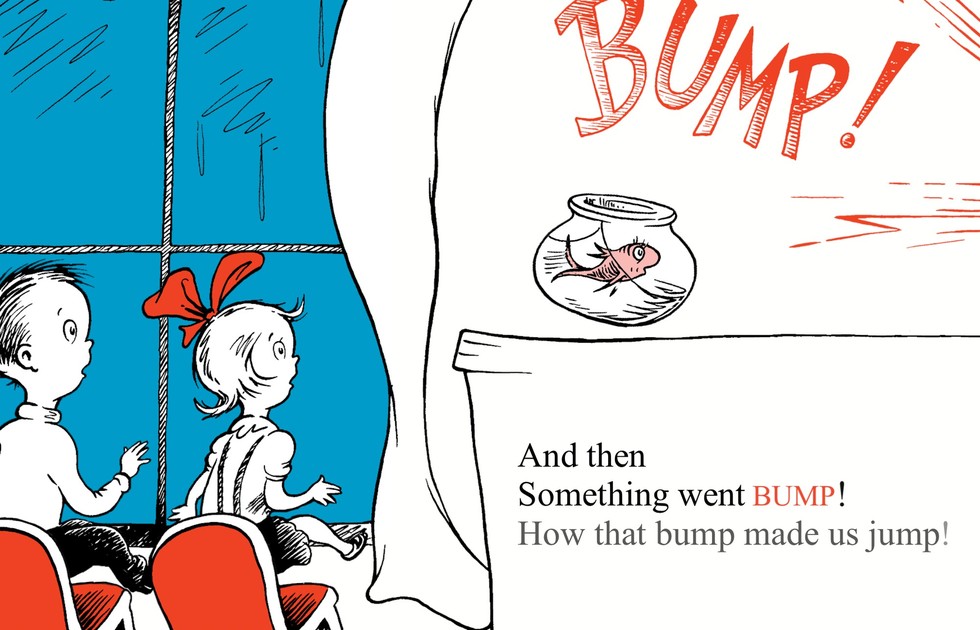 You can’t hate Dr. Seuss (even though he told your kid to “hop on pop”). The doctor’s digital edition of Cat In The Hat is the natural evolution of the book most kids learned to read first. It includes vocabulary-building activities and easy-to-sound out words specifically for younger readers. But, this still doesn’t make up for that unwatchable Mike Myers movie.
Ages: 3+
$3.99 (iOS) (Android) 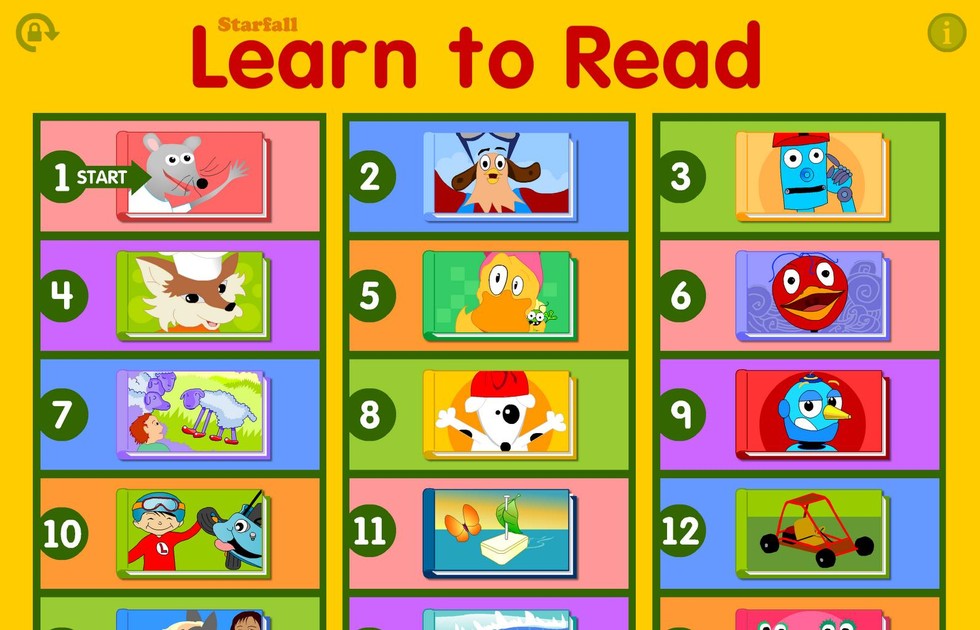 Each of these 15 mini-books gets your kid to focus on a particular vowel. A, E, I, O, U … and sometimes Y? Why sometimes? Why?! Once they master those letters, you can get them a meeting with Pat Sajak. Those vowels are worth a boatload of cash!
Ages: 4+
$2.99 (iOS) (Android) 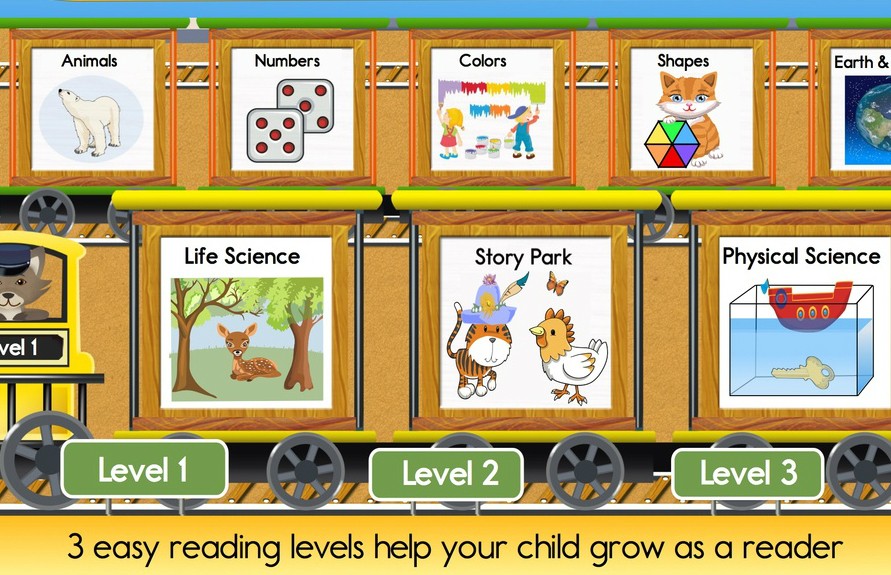 Whether you opt for the paid or free version, this reading app has an extensive list of stories for beginner readers. You can tell this one was designed by a tough teacher, because it doesn’t give your kid any “sound it out” hand-holding. But, it does include a dictionary, which means you can finally use the phrase “go look it up.”
Ages: 5+
Free (iOS) 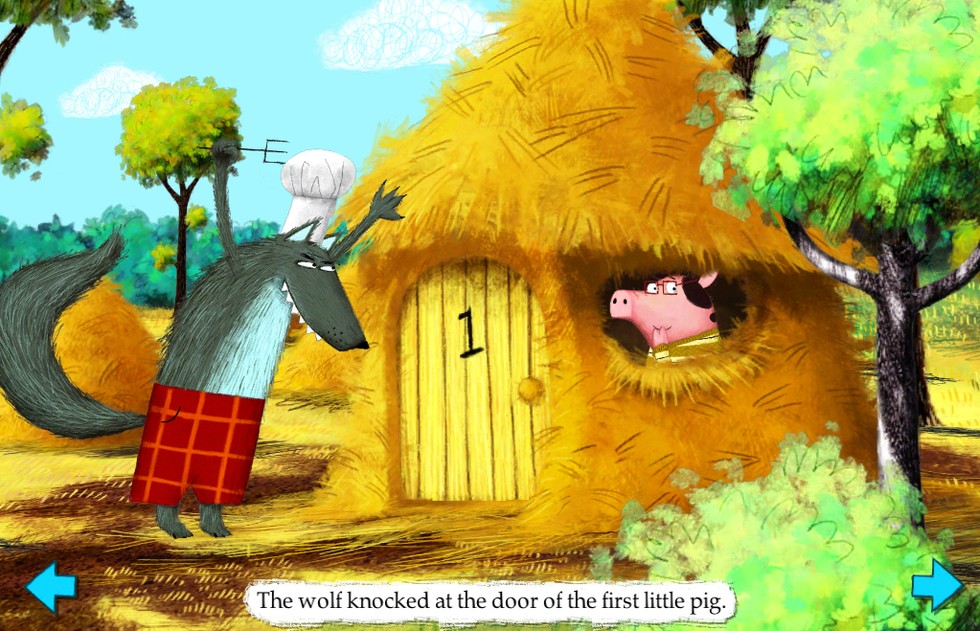 Imagine if you took out all the violent parts of Three Little Pigs and replaced it with a lot of non-threatening, follow-along reading. No structural damage. No characters are eaten. Not even a hair on a chinny-chin-chin displaced. That’s what this Nosy Crow edition of the Pigs delivers. But honestly, who cares that this Big Bad Wolf is just a slightly annoyed wolf? At least you don’t have to read Three Little Pigs anymore!
Ages: 4+
$4.99 (iOS) 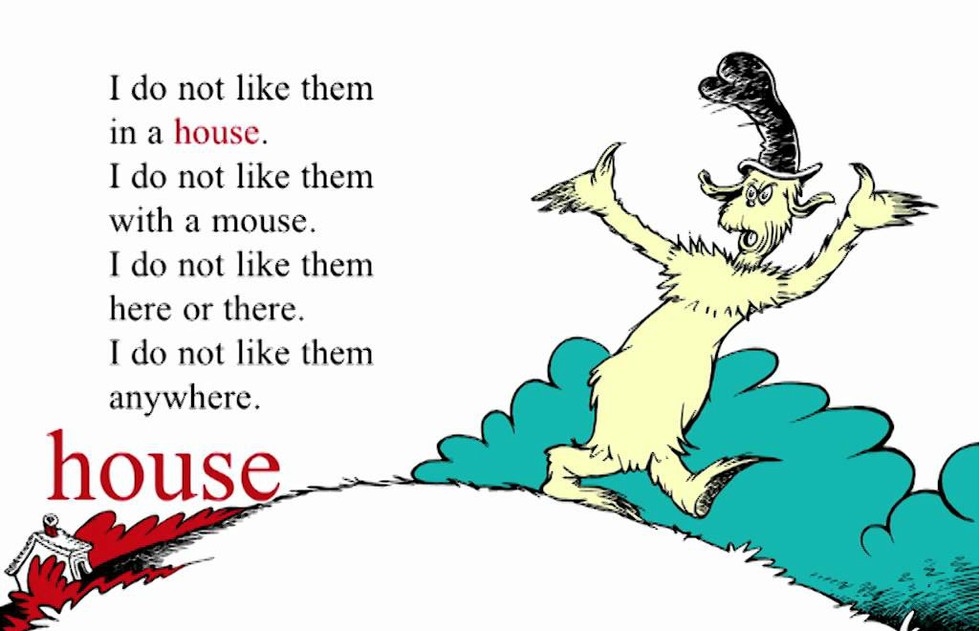 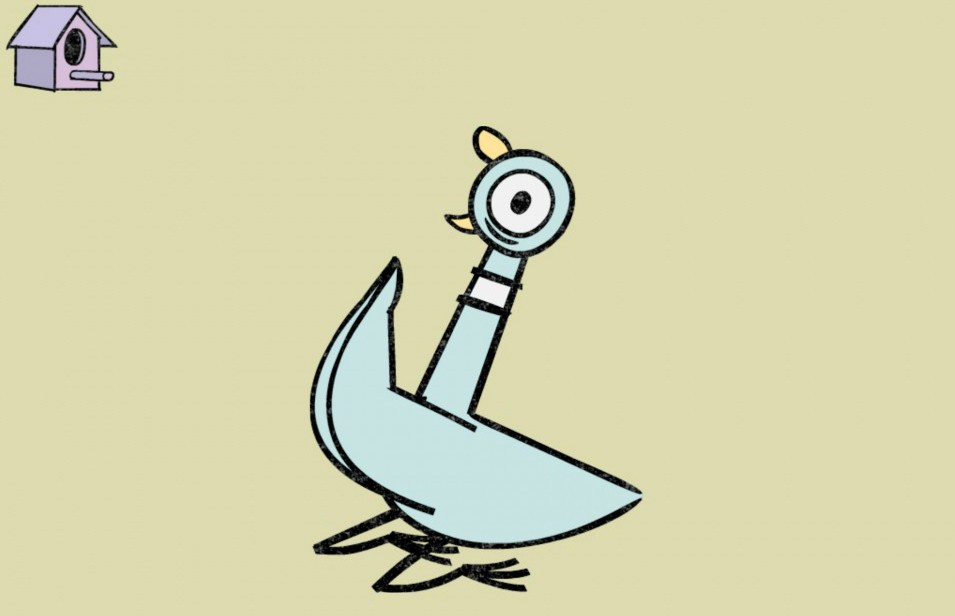 Mo Willems’ signature “Pigeon” book series is pretty funny, even by adult standards. (That goddam bird wants a hot dog so much! Hilarious!) But instead of the pigeon not wanting to go to bed, or wanting to drive a bus, or some other absurd request, this one is all about not letting him play your kid’s app. Ostensibly, children will learn how to craft a story. But the bigger lesson is how they can effectively torture an annoying pigeon.
Ages: 5+
$5.99 (iOS) 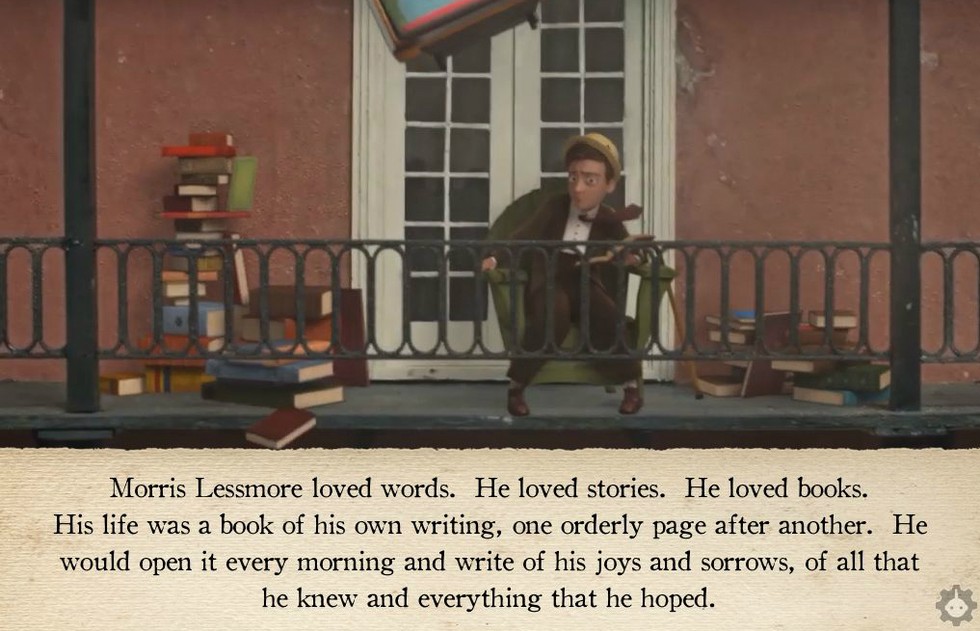 Whimsy is usually preferable to dry and literal (except when it comes to a medical diagnosis). The Fantastic Flying Books of Mr. Morris Lessmore, based on the short-film of the same name, has whimsy in spades. Let your kid explore interactive puzzles, pictures, drawings, and something called an “alphabet cereal,” which looks like a less bizarre Fantasia sequence.
Ages: 6+
$4.99 (iOS) (Android) 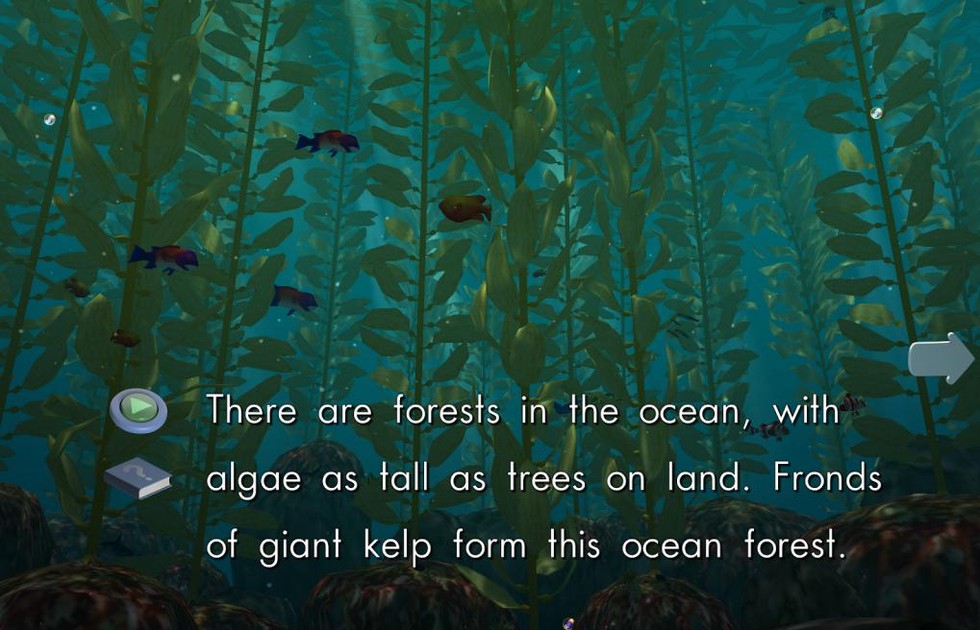 Fish may not be terribly smart, but that doesn’t mean you have nothing to learn from them. Give your kid the iPad and have them take a deep dive into learning about this ocean environment while pronouncing the word photosynthesis with the built-in dictionary. As it turns out, the “p” is not silent.
Ages: 6+
$2.99 (iOS)