It's a killer car for kids who want to cruise around the cul-de-sac. Or parents who want their kids to smugly talk about the efficiency of their vehicle.

Great news for parents who want to live vicariously through their children’s rides: Radio Flyer just released the Tesla Model S electric car for kids. Billed as the first and only battery-powered vehicle that uses lithium ion batteries, which charge faster than regular batteries, the car is a killer mode of transportation for cruising around the cul-de-sac. Or parents who want their kids to smugly talk about the efficiency of their vehicle.

The Radio Flyer Tesla Model S lets drivers toggle between six or three miles per hours, depending on their need for speed — or the laws of your neighborhood. Specs aside, the Tesla just looks great. It has the same telltale Model S body, along with black rims and purring motor. Because of its ion batteries, the Tesla electric car apparently runs three longer and charges faster than competitive models.  It has a six mile range and can be driven in forward or reverse mode. And like its adult counterpart, it charges through the tail light port; otherwise, you can remove the battery to charge it separately. 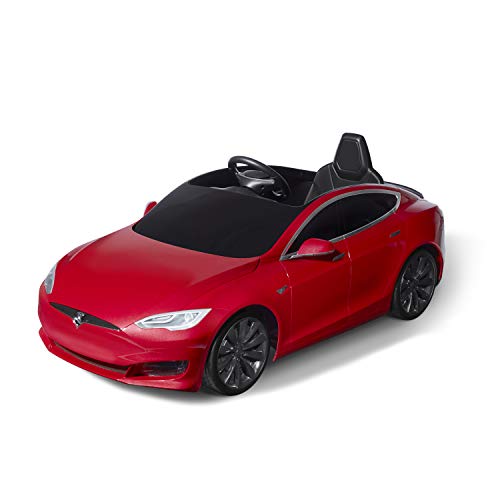 Your kid can cruise around in this dope electric Tesla Model S car.

Because it can’t be a Tesla without high-tech flourishes, the car also has LED headlights, a working horn, and a music player. So your kid can blast DJ Marshmellow or Imagine Dragons while going for a leisurely Sunday drive. And when kiddo is done, he or she can store his loafers and driving gloves in the trunk. Yes, trunk.

Because this is no ordinary electric kids’ car, you can choose the paint color, performance, accessories, and personalization. After all, it’s one of the many things (along with founder Elon Musk’s, ahem, idiosyncrasies) that the brand is famous for.

A basic Model S would set adults back $70,115. Fortunately, the child version is more affordable, at $600, a nice price drop from an earlier model that, three years ago, retailed for as much as its adult brethren.