Instead of trying to be something it isn't, Polaroid's newest camera just takes great pictures and looks like its old, authentic self.

Polaroid prints are relics from a different time: washed out, blurry, faded, undeniably retro. Yet even as iPhones have transformed every amateur into a self-styled Carrie Mae Weems, there remains something undeniably gratifying about holding a physical print in your hands, as opposed to scrolling through your crowded photo stream. That’s where Polaroid’s Now camera comes in. It’s the best instant camera we’ve used and is the most high-tech instant-film shooter available in analog form.

It sounds counterintuitive, but it’s not. In fact, its simplicity is what makes the Now so brilliant. Unlike the company’s recent releases, the Polaroid Now doesn’t mess around with multiple lenses or extraneous connectivity features that don’t really serve much of a purpose. Instead, its newest camera has an autofocus system that detects the subject you’re shooting, then slides in a 35mm or 40mm lens based on how far the subject is from the camera, and does the work for you. 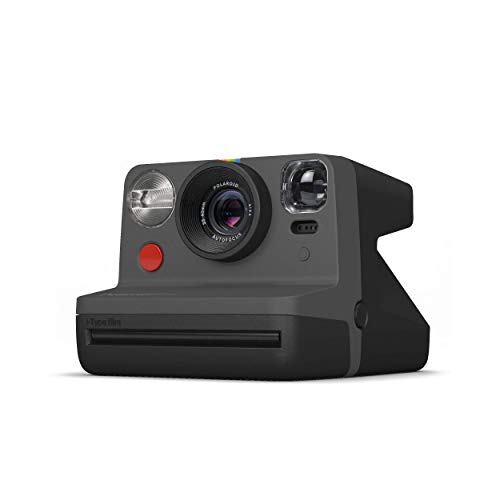 Polaroid's new camera is gloriously analog, and its standout feature is its autofocus capability.

We take autofocus for granted on smartphones and digital cameras, but the nifty invention is a rarity in the instant camera space. Polaroid was actually the first company to incorporate it decades ago with a module that attached to its higher-end cameras. The new Now is the first of the previous generation and the modern to incorporate this feature so that you can capture who or what you want with fewer distractions in the background.

The Now also includes an updated flash from previous models, which ensures that every shot is perfectly exposed—a handy feature when the cost of film is a concern. It does this automatically so that you can focus on the moment rather than the features. The only issue is, because it does the thinking for you, you can’t actually choose the lens for yourself. But given that most of us didn’t actually go to photography or art school, it’s a tradeoff we’ll make.

The camera has a shutter button and a self-timer button in front. In true old-school fashion, there’s no selfie mirror. A digital readout tells you how many photos you have remaining. Perhaps the best updated feature is the USB-charged battery itself, which lets you shoot through 15 film packs, or 120 shots, between plug-ins.

Of course, the updated, curvier shape is beautiful, and it comes in five of the company’s vintage colors for style. But nothing beats the immediacy of a Polaroid itself. Whether you’re hanging them on the fridge, tucking them into a book, or giving them away to the subject of that special moment, the Polaroid Now does it better than ever after coming close to never doing it again.