Paint with water books, and Water Wow! books, will be your go-to when traveling with children. Trust us on this.

Last summer, after a particularly grueling flight with a restless infant-in-arms I vowed never to fly again. I even went so far as to declare ⏤ much to my wife’s mortification ⏤ that we would drive the 19 hours on our next trip rather than step another foot aboard a plane, somehow forgetting that such a journey would entail 19 hours in a car with a small child. Needless to say, I was on the brink. Then my wife came across the Water Wow! coloring books, and my sanity was, at least partially, restored.

In the grand scheme of things, keeping a toddler occupied during a plane or car ride has never been easier ⏤ simply pull out the iPad, queue up Zootopia, and slap on a pair of headphones. Wake me up when the flight lands. The problem for my wife and I, however, ⏤ and yes it is self-imposed ⏤ is that we still aren’t entirely down with kid tablet time. In fact, flying is the only occasion where our 2-year-old gets to use an iPad or smartphone at all. And even then, we’d rather her not spend the entire flight staring at Curious George, no matter how curious a monkey he may be. Which is why when we travel we try to keep her entertained, at least part of the time, the old-fashioned way ⏤ with Benadryl. Kidding! With books, stickers, flashcards, and what has become my flight-saving favorite travel essential: the aforementioned Water Wow! 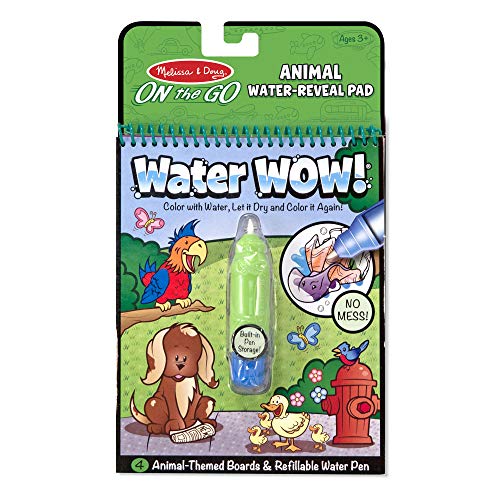 Melissa & Doug‘s Water Wow! is a paint-with-water coloring book befitting of its exclamatory title. It’s designed for use on the go, and as such, includes no markers, paints, or crayons ⏤ nothing to wash off the wall, tray table, or passenger sitting in the seat next to you. Instead, kids paint with a giant water brush and each stroke ‘magically’ reveals part of a hidden image. When the page dries, the picture disappears and kids can start again. It’s like having an infinite number of pages.

Each spiral-bound book comes with four reusable coloring boards and a “chunky” refillable pen. There are a bunch of themes to choose from ⏤ numbers, animals, vehicles, fairy tales, what have you ⏤ and they all include search-and-find activities, so there’s some element of book learnin’ going on as well. Best part: they’re only $5 a pop. Fill up that carry-on.

Obviously, there are plenty of reasons to love the Water Wow! I’ve already ticked a handful: they’re reusable, there’s no permanent mess (other than spilled water), and you don’t need to put down a mat or strap on an artist’s poncho. Since the pens run off water, and flight attendants serve tiny cups of it, you never run out of in-flight ammo. And finally, they can be downright mesmerizing. Admittedly, our daughter’s a little young for them and doesn’t play as long as I’d like ⏤ they’re targeted to kids three and up ⏤ but I’d still argue that they’re great at holding a child’s attention. Strike that, anybody’s attention. Rarely have we had friends over for dinner where one adult hasn’t gotten sucked into drawing on the Wow!, the conversation swirling around them as they sit quietly transfixed on the couch painting.

Weirdly, though, I still feel like a lot of parents don’t know about the Water Wow! Maybe I’m wrong. They do have thousands of 5-star online reviews, and the folks who don’t like them generally cite one of two common complaints, both of which I would completely agree. One, they can leak. Not always, but they do. And water gets everywhere. Consider your expensive Sandalwood coffee table and cotton Dockers warned. Two, the pages will eventually warp. Melissa & Doug admit this on the package but reviewers still act outraged when it happens. It’s water on cardboard people, let’s put two and two together. That said, again, they cost $5. Ours have lasted over a year.

Next week, my family will be on vacation, sitting three across row 34. And while sure, no single toy or book or even iPad is an end-all-be-all when you’re trying keep a toddler occupied for hours, I do know one thing: There’s no way I’m getting on that plane without this magic book. I’ve learned my lesson.

Every product on Fatherly is independently selected by our editors, writers, and experts. If you click a link on our site and buy something, we may earn an affiliate commission.
ADVERTISEMENT
Oops! Please try again.
Thanks for subscribing!