It's three toys in one, for starters.

Anyone who reads our toy coverage knows we strongly believe that the best playthings do the absolute least. And this isn’t just our opinion: Any child development expert will tell you that while toys that light up and play music aren’t inherently harmful, they also don’t challenge kids — especially younger kids — to problem-solve or exercise their imaginations. The best toys encourage kids to engage creatively and play in an open-ended way. Take Duplo blocks. Because there’s absolutely no prescribed way to play with them, kids do whatever the hell they want. That’s why a Lego car can also become a dragon, a unicorn, an unholy-yet-awesome combination of the two — or anything else at all, for that matter. 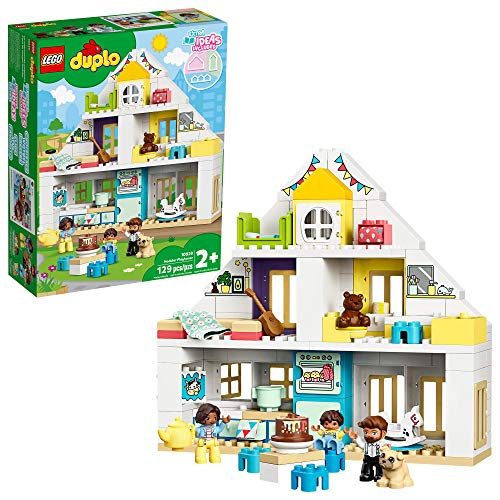 Which brings us to Lego’s modular playhouse. First off, we dig that it’s meant for younger kids (the box says age 2, but we think it’s more of a realistic fit for preschoolers who are able to concentrate for longer periods and thus put this thing together). The most innovative Lego sets are generally also the most difficult to build, so this set, as part of the Duplo line, really stands out. Of course, you can buy a badass stormtrooper helmet, but it’s meant for high schoolers.

Second, take a look at the minfigures. They’re not all white. No, they are not. And that’s a big deal, considering most others, across most sets, look like something out of a ’50s sitcom. As parents, we need to stop pretending everyone looks the same and give kids toys that resemble and represent themselves, their friends and family members, and the larger communities that make up their world.

And then there’s the set itself. It’s the epitome of awesome fun while also boosting problem-solving and encouraging the development fine motor skills (that’s when kids sync up their eyes and fingers to do stuff, like put bricks together). The house itself has a kitchen, living room, bathroom and a bedroom. The details matter here: The fridge opens, for example. And there’s a dearth of pink, which means this particular playhouse is, for the most part, as gender-neutral as a toy can get. Thumbs up.

Best of all, this is actually three sets in one. The playhouse can be reconfigured into a tower house and then again into a residential home. When kids are done building those three, they can simply dump out the bricks and create whatever else they dream up. That’s where the open-ended play comes in, and it’s the gold-standard for toys.

The Lego Duplo Town Modular Playhouse checks all the boxes. And on hot summer days, when you’re about to lose the last remains of that thing called patience, this house could well be your country escape.