Pets, like children, need to be buckled in securely. These crash-tested pet harnesses keep them comfortable during a ride and safe in the event of an accident.

Because you care about your dogs, you want them to be safe in the event of an accident. Therefore, it’s not a good idea to let the latter run free and untethered in the cabin of your car. You need to securely fasten them in. That’s where pet harness systems come into play.

If you’re still shaking your head about the idea of strapping your dog in during a ride, then you need to consider some finer points. For one thing, a small dog running around could get trapped under the pedals, making it impossible for you to stop. Second, a small hound will literally fly right through the windshield during a panic stop. And don’t think you can prevent that from happening: If you have an accident at 35mph, a 20-pound dog will crash through that glass with the force of 6,241 pounds. Even if it’s a fender-bender that happens at just 10mph, a 20-pound dog balloons to 509 pounds. You can’t hope to restrain that much energy, which is of course why you belt both yourself and your kids, and that’s exactly what you should do with your dog.

It’s worth adding a yet more terrifying image — your ricocheting pet harming you or one of your children. You don’t want that to happen, and the smartest form of prevention is using a full-chest pet harness, one that’s actually been crash-tested. These systems are attached to a seatbelt, which is buckled into its latch. That way the force of the impact, just like with a human, is captured by the seat belt, and not by the skeleton of the animal. Why not just use any old harness? Because the Center for Pet Safety (CPS) actually found, with funding from Subaru, that several models they tested in 2013–15 were simply not secure and blew apart at key locations under the load of an accident.

As a result, CPS only recommends a few brands that passed their testing. However, you do have a few more choices. The CPS conducted its testing over five years ago, and since that time a company called Kurgo has made a few models of safety harnesses that passed independent testing by the University of Michigan’s Transportation Lab using the same standard the Feds use for testing restraint systems for children.

It’s also worth noting that Volvo, which has studied how loose pets in cars cause drivers to become more distracted and therefore a danger to themselves and their animals, also makes its own harnesses and integrated barrier systems that work like crates. But the latter would still mean a dog might fly into the barrier during an accident, which is why we recommend the belting system instead. Beyond the obvious peace of mind gained by securing your dog with a system that will protect everyone in the vehicle, there’s also the legal matter: Some cities and states can also ticket you under distracted-driving laws for having a loose pet in your car.

Here, then, are three crash-tested pet harness systems to consider. 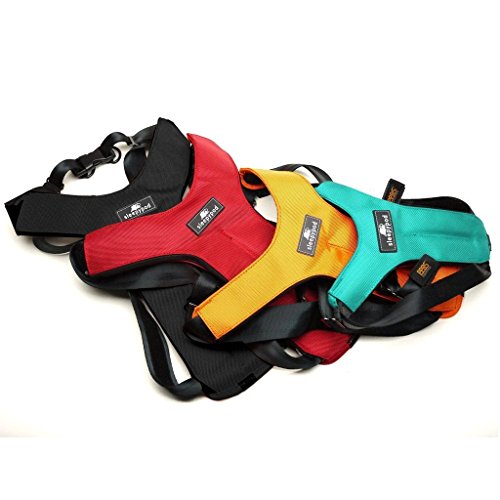 This all-in-one harness, certified by the Center for Pet Safety for dogs from 18 to 90 pounds, features a special 'infinity loop' webbing design with three points of contact as well as a padded vest, tough straps, and stress-tested buckles. With their powers combined, they keep dogs comfortable and, in the event of an accident, provide enough protection and support to help them stay safe. Everything for the system is included and the system can also double as a walking harness.

A Reminder About Dogs and Temperature

The American Veterinary Medical Association cautions that the temperature inside your car can increase by 30 degrees in just 20 minutes, shooting from 70 degrees to 99 in a very short time. Which is why you really need to be sure to protect your dog inside a car, with cracked windows or possibly even leaving the engine running and the A/C on, and why Tesla’s dog mode, that keeps the car cool while you’re away, is quite brilliant.

No, this isn’t some sort of jet propulsion equipment for your pet. But wouldn’t that be sweet? In any case, this is a multifunctional, CPS-approved, and very adorable harness for small dogs (less than 25 pounds). It doubles as a walking harness and serves to position your dog on the back of the seat, as children are, so they stay still and don’t go flying in the event of an accident. The system includes a velcro harness, dog car harness, straps for both a backpack and the child seat anchors, and a headrest strap.

On a lighter note, because we’re kind of car nerds as well as dog nerds, we love the pet travel offerings at Orvis. The company not only has a comprehensive range of coverings to protect your seats from claw scratches and dog drool but also ramps and steps to aid your senior pooch on approach and departure. This one, which plugs into a trailer receiver hitch, is brilliant because it could stay on your rig. Also: It’s pretty handy for humans to use as a convenient tailgate bench. 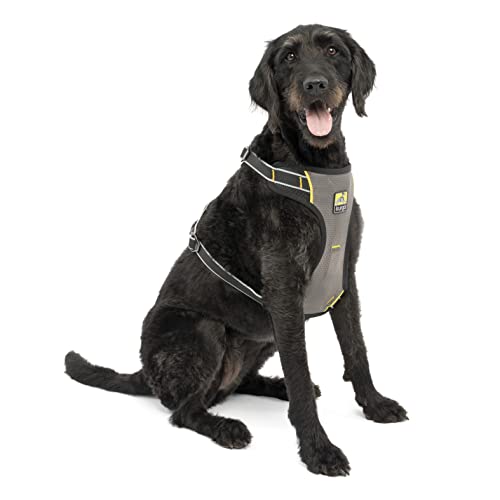 Crash-tested for dogs weighing up to 75 pounds, this system passed independent testing by the University of Michigan’s Transportation Lab that used the same standard the Feds use for testing restraint systems for children. The system, based on rock-climbing harnesses, is comfortable and secure. It features seatbelt tethers, a wide, padded chest strap, five points of adjustment, and steel buckles. It can also double as a walking harness and is compatible with any vehicle seat belt system.