It's foolproof and idiot-proof.

The rice cooker and food steamer in one is the kind of culinary marriage I can get behind, because it gives me endless dinner ideas. The Cuisinart rice cooker has made dinner prep so, so, so easy and the rice cooker steamer lets me play with healthy dinner recipes.

I’m a sucker for fancy-looking kitchen gadgets that are shiny and pretty and by and large, worthless. Meaning, mostly overpriced garbage that I’ll use once, if at all, and then forget I even own. The exception here is my pasta maker, my culinary true love. And in second place is my Cuisinart rice cooker slash food steamer (known as the Cuisinart CRC-400 Rice Cooker 4-Cup Silver if you’re nasty).  It’s a creation so stupidly brilliant, I can’t figure out why no one else thought of it sooner.

You dump dry rice (it has a four cup capacity) into the rice cooker and add chicken broth or water, and press a lever that starts the cooking process. Then, you add the steamer basket to the top of the rice cooker, and the steam released from cooking the rice steams your food. And by food, I mean salmon and chicken and carrots and broccoli and asparagus and whatever the hell else you can get your kids to eat. You get a complete meal, using one gadget, in roughly 20 minutes. 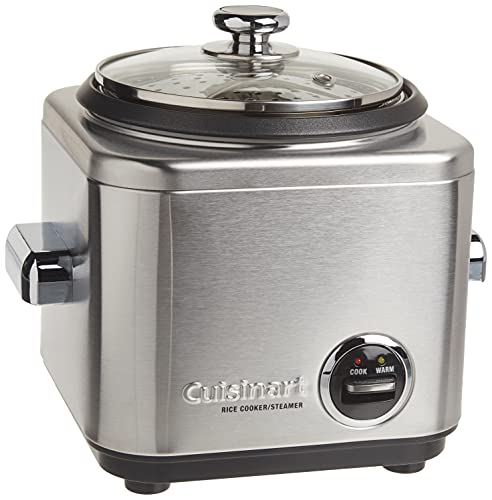 This is literally, no joke, the easiest, most efficient way of getting dinner on the table in minutes.

Yes, there are many, many different rice cookers and steamers. They’re a staple in a lot of homes. And a lot of them have glistening surfaces and even clay inserts. But I love Cuisnart’s cooker because it’s affordable and, most importantly, foolproof.  It’s so easy to use, it’s almost mind-boggling. I don’t even use measuring cups anymore because I’ve literally never been able to screw this up. And let it be known that I am clinically incapable of following recipes.

This rice cooker is no Maserati. It won’t make porridge or risotto. It’s not some glorious work of art that looks gorgeous on your counter. Let’s be clear. It makes rice. Period. But it does so with panache and ease. It steams vegetables, just as easily. As working parents with hungry kids clamoring for food, this two-for-one gadget is my go-to for getting dinner ready in minutes. Bon appetit.

cooking kitchen gear
ADVERTISEMENT
ADVERTISEMENT
More From Gear
Gear The Best Aprons For Men Who Cook
Gear The Best Extra-Virgin Olive Oils To Fire Up Your Taste Buds
Gear Cooking With Whiskey: 6 Recipes That Use Bourbon, Scotch, and More
Gear All-Clad is Having a Site-Wide Sale and We’re Losing It
Gear The Best Premium Food Delivery Services for Families
Gear The 7 Best Pod Machines For Families With More Kitchen Counter Space Than Time