Summer is treehouse season. Here's what you need to give your kid an elevated sanctuary of their own, right in the backyard.

A DIY treehouse is what childhood dreams are made of, and tree house kits make their construction easier for you, the dad whose feet are not planted in dreamland. If your child is ready for a Sandlot-like structure, rather than winging it (trust us, you do not want to “wing” a weight-bearing arboreal hideaway), it’s time to consult the pros. Thankfully, since your own childhood all manner of books and kits are available. The more expensive will deliver everything you need, down to the last screw, to your front porch. Others are akin to schematics, entrusting you to navigate the aisles of a Lowe’s or Home Depot to gather supplies yourself.  Whichever method you select, all these kits can withstand the buffeting winds of childhood as well as the real-world danger of cooties and the assault of girls. With the weather starting to cool, now’s the time to break out the circular saw and tuck that marking pencil behind your ear to build a structure that your son or daughter will remember well after he or she is grown. Let the hammering and sawing begin.

If you have some serious cash to drop, consider the Tinker Bell Tree House from Tiny Town Studios. It's technically cheating, as the structure is centered on a tree made of concrete, but it's hard to argue with the final product. From the outside, it looks like a house straight out of the shire surrounded by an ample deck. Inside, there's enough room for five kids to have a backyard campout, along with running water and electric lights.

If an easy set-up is your top priority (and you don't want to spend your kid's college fund on lumber), this instant treehouse is the way to go. It mounts directly to a tree trunk, doesn't require any branches for support, requires zero two-by-fours, and can allegedly be set-up in two hours. Its 4-foot by 4-foot floor can hold a couple of kids up to eight feet off the ground. While it may not look like a traditional treehouse, it will give kids that same magical feeling of being tucked away in the foliage.

While not made of wood, this four-kid structure is sturdy enough for sleepovers and then packs down when not in use. With a recommended setup height of four feet, it's great for children leery of heights.

Somewhere in between a full kit and the plans themselves, Treehouse Supplies has carved out a niche. It sends you the plans based on your base materials (in this case, a single tree with a planned two posts), as well as the metal hardware itself. All you have to do is tromp down to your local lumber yard and hand them your shopping list of various woods (most deliver). Voila: In two stops, you're ready to build.

This product is a digital download of two different plans —depending on if you have one or two trees to build with. Either way, you'll end up with a snug treehouse that packs three windows and an awesome trap door entryway into its 28-square-foot frame. A smaller design means this treehouse is cheaper and easier to build.

This treehouse plan is centered on an 8-by-8-foot platform that supports a 41-square-foot treehouse, with the rest of the space dedicated for a balcony. The roof cleverly hangs over the door to the treehouse, keeping it dry and making it a great place to read while listening to the rain.

We're very into this design, which lets the tree itself shoot up, right through the included deck that also serves as the ladder landing. The structure itself provides 40 square feet of enclosed space covered by a roof that slopes from 7 feet to 5½. If your backyard doesn't have a thick-enough tree, you can also build this one on posts and use a tree as a partial support so you get the look of a classic treehouse without a safety risk.

The look of this treehouse is dramatic, with a sharply sloping roof down to the platform broken up only by a cantilevered window — or is it a skylight? These plans include detailed schematic drawings and a rope and pulley system that lets parents deliver needed supplies to their kids without having to clamor up the ladder. There's also a fire pole kids can use to slide safely down to the ground when it's time to go inside.

This open-air structure is quite simple, with three diagonal beams attached to a single tree supplying nearly all of the support. The wall that wraps around it deliberately leaves space above and below, a touch that makes this whole thing feel more like a fort. With 42 square feet of floor space, this treehouse can accommodate several kids, who will feel more like they're immersing in nature than taking a refuge from it. 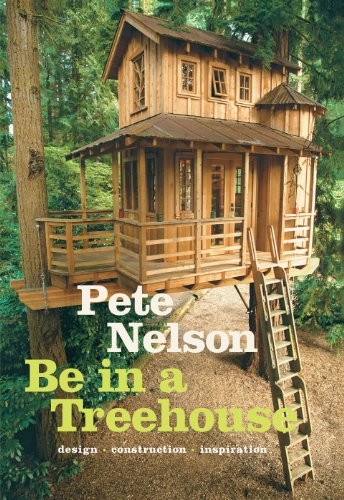 'Be in a Treehouse' by Pete Nelson

Pete Nelson really loves treehouses. He has his own design and building firm, Nelson Treehouse and Supply, and claims to have built hundreds of the things over the years. This book is billed as a source of both inspiration and practical information about treehouses, containing as it does profiles of treehouses around the world and diagrams that illustrate the principles of treehouse construction. If you want to design your own treehouse, this book is a good way to get started. 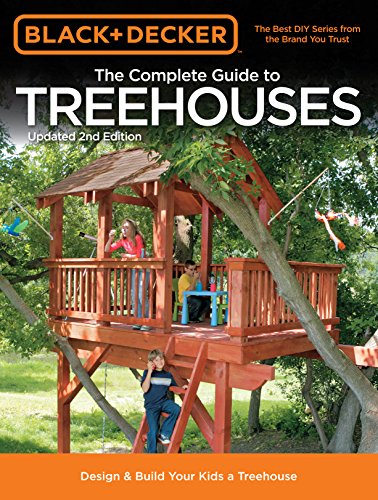 If you're looking for a more straightforward guide with specific plans, the second edition of this guide from Black & Decker is a good pick. It includes sections on treehouse basics and building techniques, along with eight distinct plans for everything from an A-frame treehouse with a walkout deck to a shanty situated between four different trees.