The Best Pool Floats for Both Kids and Adults: Summer 2021

The wildest, wooliest giant pool floats of the summer, from unicorns to pirate ships.

It was a long, cruel winter, but now sunshine and summer are back in full swing. It’s time to invest in new swim gear, dust off the cooler, and take inventory of the inflatable pool toys. If your menagerie of pool floats for kids is looking thin, 2021 is the time to go big. And here’s some good news: From giant inflatable dragons and buckin’ bulls for the adults, to pirate ships and cartoon sharks for the kids, there’s never been more variety in such a niche area. There’s also never been as great an effect on a boring pool party as that of adding a giant inflatable unicorn or T-rex. If you’ve been on the fence, it’s time to hop that sucker, buy a couple of ridiculous pool floats, and start that Saturday-afternoon drift at the nearest pool or pond.

We’ve rounded up more than two-dozen spectacular inflatable toys for kids and adults. These all go big on imagination but are also well-engineered, durable, and easy to both inflate and deflate. When the kids tire of playing pool games, the whole family can set sail on a giant slice of cool watermelon. 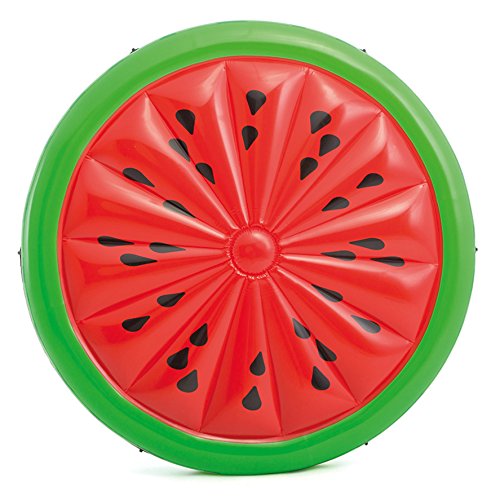 Nothing better than floating on a slice of summer. This watermelon island, seeds and all, is 6 feet in diameter and fits two adults comfortably. 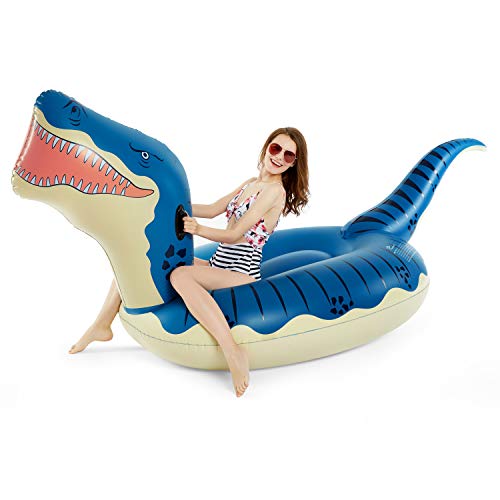 Tyrannosaurs Rex may no longer roam North America, but he's still king of the pool floats. At over 10 feet long, from tail to teeth, this giant inflatable dinosaur eats other floats for lunch. 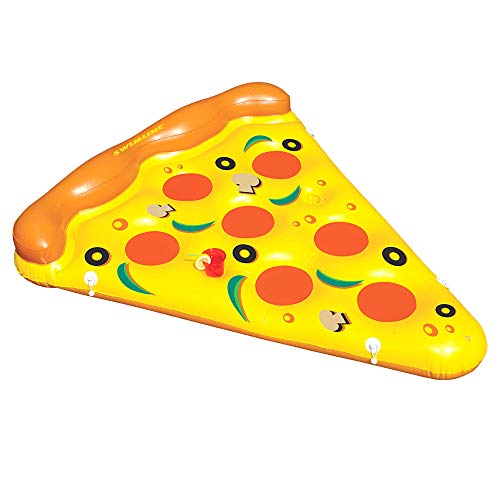 Is there anything more pleasant than floating away on a nice slice? This inflatable piece of veggie pizza is perfect for one adult and features a soft pizza-crust headrest and a pair of cup holders tucked in among the mushrooms. 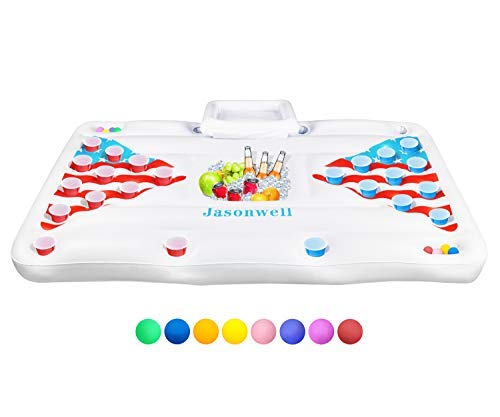 If you're not into playing beer pong, then use this giant pool float as your own aquatic bartender. This pool float has a built-in cooler to keep your drinks cold and slots for your cups. Bottoms up. It's 6 feet long. Bottoms up, again. 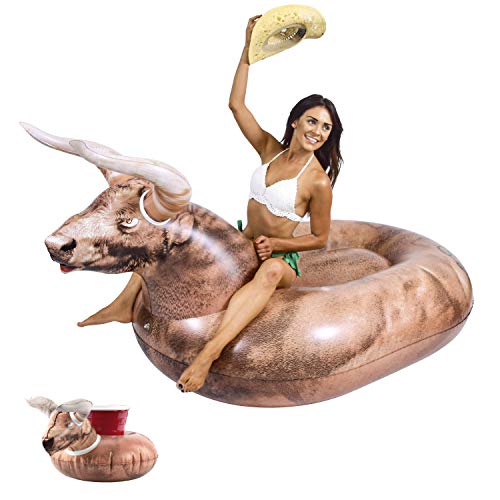 Yeehaw! Grab that proverbial bull by the horns with this insanely cool and coolly insane float. It includes its very own mini-bull drink-holder float, and can hold two adults, or a few kids (maximum weight is 500 pounds). It's made of premium UV treated vinyl. 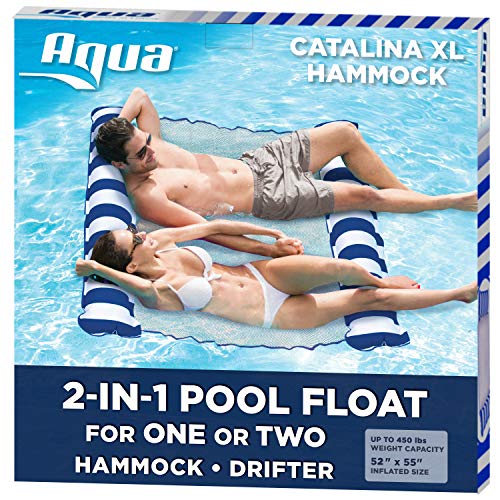 A minimalist float that makes it easy to keep cool, even on hot summer days at the pool. Two inflatable pillows are connected by a stretch of comfortable mesh so you're truly floating on the water. Roomy for one but accommodates two, you can also re-finagle the water hammock into a lounge chair. Because it's mostly mesh, it's also easy to inflate and super portable. Weight capacity 250 pounds. 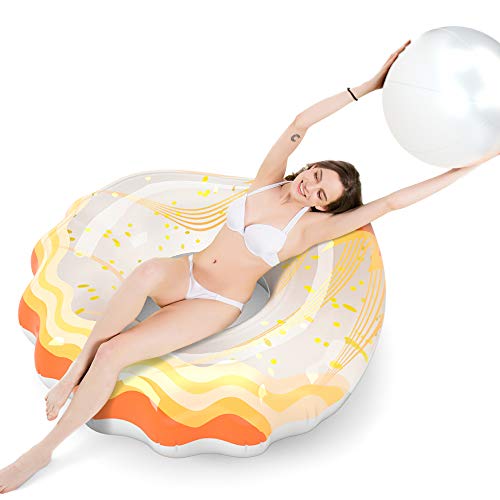 Had Jay Gatsby lived in our time of giant, fun pool floats, he almost certainly would've had a dozen of these floating on the pool — surprisingly elegant but just as fun as a rainbow unicorn, this oyster comes with a pearl-inspired beachball. 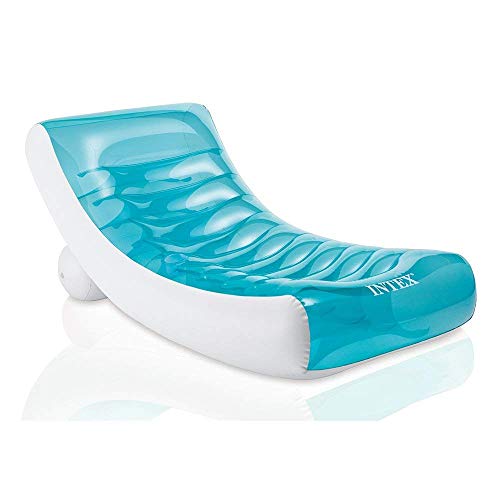 This pool float lounger is like having your own La-Z-Boy in the water. The contoured design brings the comfort and the cup holder brings the refreshments. Or ice cream. 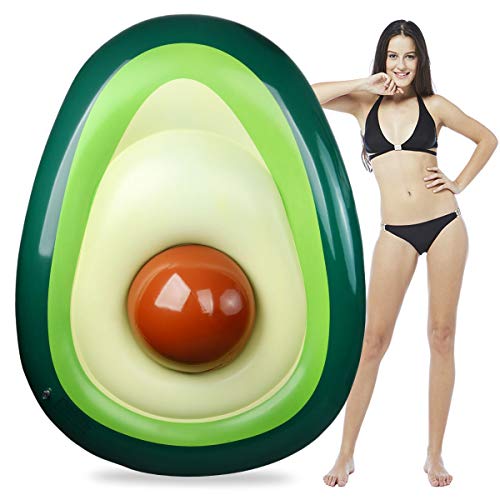 This 63-inch-long avocado float comes with a bonus beach ball in form of its removable pit. Ideally paired with a giant inflatable onion, lime, and tomato (for pool float guac), this avocado float is the perfect amount of silly. It's also nice and heavy-duty, with a weight capacity of 440 pounds and a quick-inflate valve to get you into the water faster. 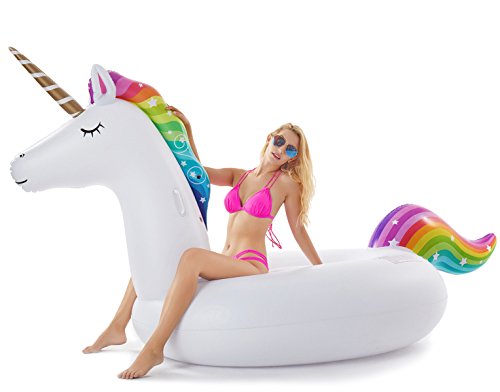 Your pool will be a desolate realm without this majestic unicorn pool afloat in it. Not only does this unicorn float bring the magic, it's also practical and is designed to hold two adults (weighing a total of 400 pounds). 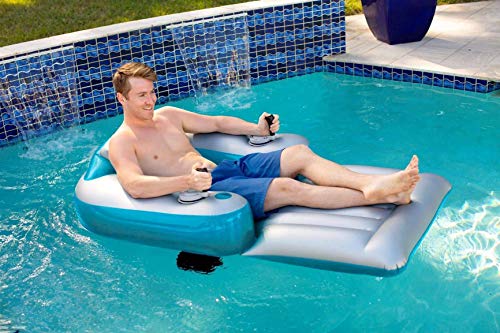 You will be obsessed with zooming around on this motorized lounger. This float has dual 66W motors with independent joystick controls at the end of each armrest. 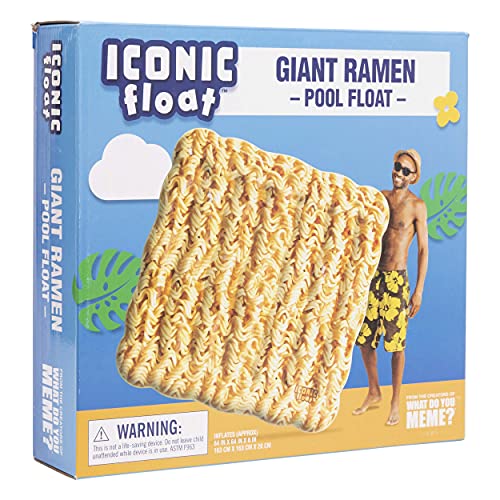 Just add water! This ramen float fits a couple of adults or a few kids and remains stable thanks to its width of over 5 feet. Perfect for reading, sunbathing or just noodling around all summer. 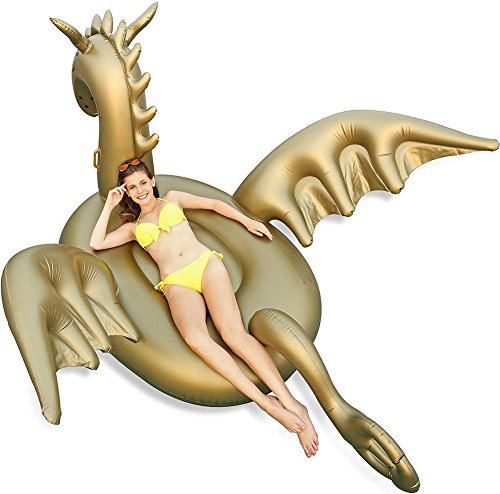 You'll feel like the king of dragons on this golden float with a huge wingspan. This massive golden dragon float, which is 103-inches wide, will take up a sizable chunk of your pool. 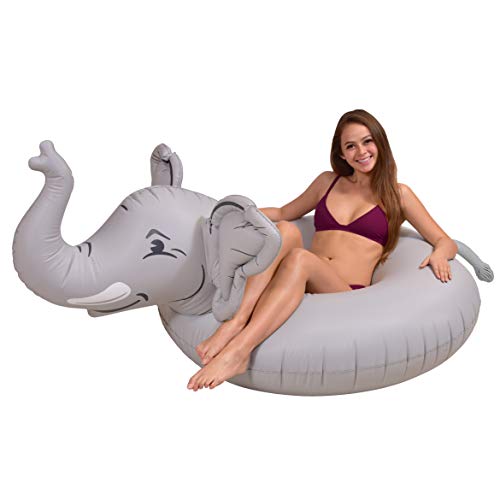 If you can't go on safari, bring the safari to you with this elephant pool float. This whopper of a pool float can hold up to 500 pounds of weight. It's 4 feet wide and almost 3 feet tall. 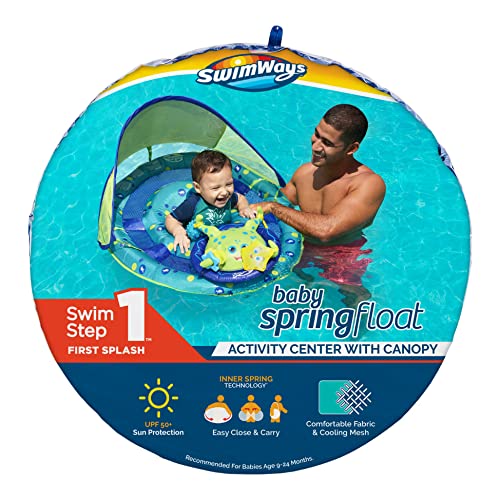 Induct your littlest ones into the wonders of summertime pool time with this covered baby pool float. Recommended for babies 9 months and older, this baby pool float features a very sweet octopus that turns 360 degrees, as well as a squeaker, rattle, stacking rings, and soft touch star. It has dual air chambers and an inner spring for greater stability. There's also a retractable canopy with mesh sides that offers UPF 50+ protection. 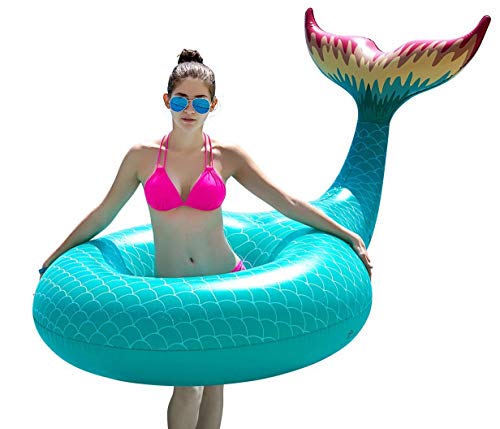 If your kid loves Ariel, this is the pool float for them. Jump in this pool float and keep your legs underwater and you'll look just like a mermaid. Singing lobsters, fish and problematic gender expectationsnot included. 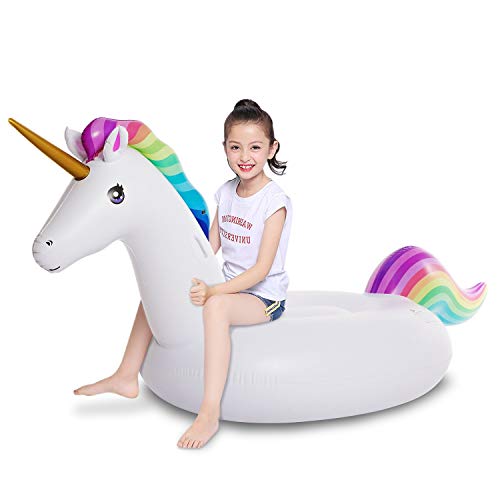 From the gold horn to the rainbow tail, what's not to love about this unicorn pool float? When inflated, it's 82 x 40 x 35 inches. We're talking serious pool action here. It's made from premium vinyl. 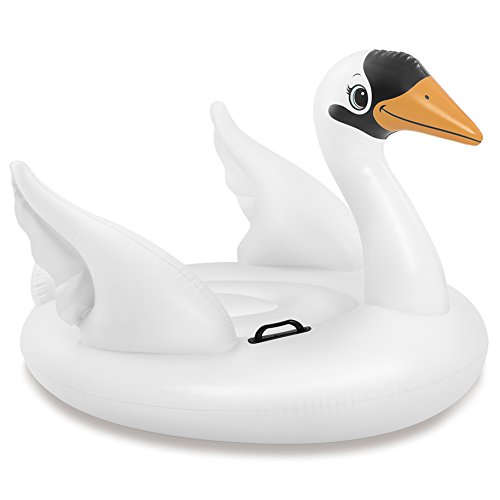 This swan pool float easily fits two kids or one adult and makes for hours of fun. 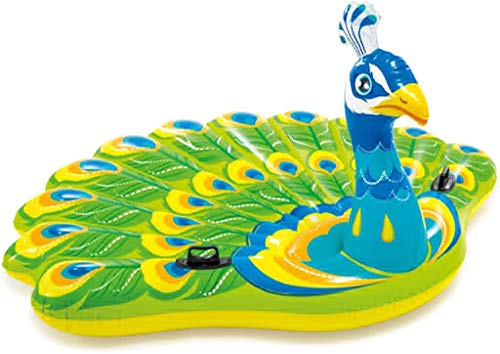 This wide and flat peacock float has extra space for lounging and can accommodate a few people hanging on the side too. 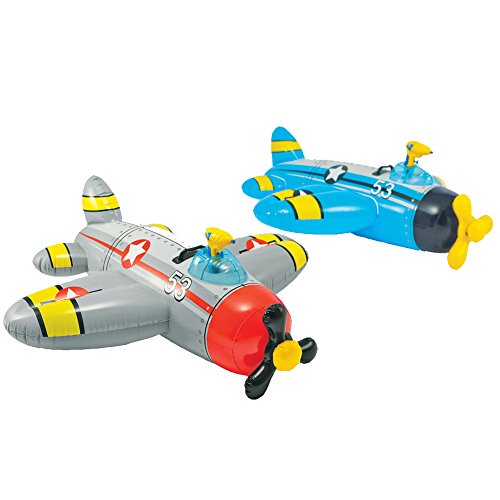 For those times when relaxation gets boring, fire at will with these water gun-equipped floats with wings that make them stable floaters. These plane-shaped floats have a built-in water gun that draws water directly from the pool. If you don't buy at least two and have an aquatic dogfight then you're doing it wrong. 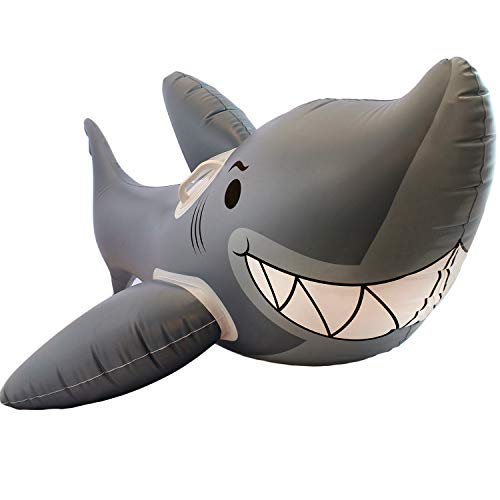 Ride on Shark float by Playtek

Floats shaped like this shark one tip easily - but that's part of the fun. 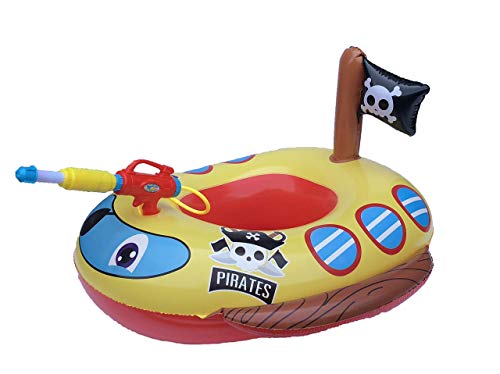 This pirate ship lets kids propel themselves forward with their legs, which remain in the water, while firing away at enemies with the built-in water gun. Kids remain in, instead of on top of the float, so it's a good option for more nervous swimmers. 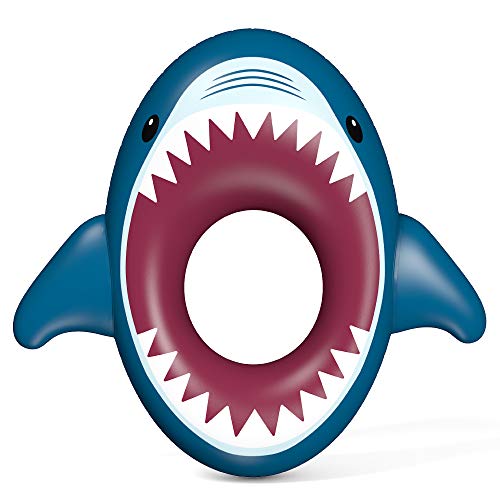 Add some drama to your pool with this shark float reminiscent of jaws. It inflates to over 4 feet.