This Augmented Reality LEGO Set Is Even Cooler Than It Sounds

Build it, then download the app to unlock the real fun for kids.

Earlier this year Lego launched Vidiyo, a new series aimed at kids 7-9 that combines building with augmented reality (AR). Children assemble relatively simple playsets using unique mini-figures, like a llama, that then star in an AR music video experience. Kids direct — or co-star in the video — using your smartphone. There are a few playsets within the Vidiyo series, from $20 to $100, but the eight BeatBox sets are the easiest and least expensive way to try the experience.

Packaged in each BeatBox set is a colorful, fun mini-figure with a dozen decorative tiles called BeatBits, which work with a constantly updated playlist of songs from Universal Music Group — think Katy Perry, The Weeknd, Taylor Swift, and Imagine Dragons. These tiles, along with the free Vidiyo iOS and Android app, give the Legos a host of creative and fun effects. 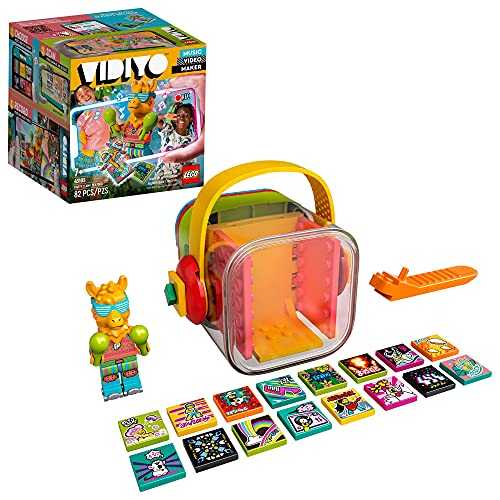 Once you build this llama and colorful stage, the tiles that come with it turn this basic playset into an AR experience using a smartphone.

Think of the BeatBox sets as two parts: the mini-figure and the stage it rests on. Once built, it’s all wrapped in a transparent display case that makes transporting easy. Unfurl the stage to show its two panels, one flanking each side of the mini-figure. These panels display the BeatBit tiles. While they look like simple decoration, the tiles give you video editing effects, from inserting simple sounds to having your mini-figure execute dance moves, in the app. The dozen tiles that come with each BeatBox are part of the more than 130 options out there.

Set the mini-figure on its stage then fire up the app. Your smartphone’s camera uses the app to recognize the mini-figure and which of the BeatBit tiles you have on the stage. Then the AR experience begins. You’ll pick a band name, shoot a photo that can work as an album cover, and tweak the look with fonts and filters. Put the mini-figure somewhere, say the kitchen counter or on the floor of your kid’s room. You can tweak the scale to make the mini-figure just a touch bigger than they really are or as big as the room. Now start the show by picking the music.

If your kid wants to direct, they can grab the phone and move around the room shooting a video as the mini-figure dances around your house. But humans can jump right into the action and be part of the video, too.

The BeatBits you scanned in earlier act as an effects menu while shooting. Depending on what tiles you have, you can add sounds, like an air horn, props, mini-figure dance moves, or visual filters. When you’re done, you can upload and share clips up to 20 seconds long to the Vidiyo app. Parental controls mean you can monitor what is posted and it’s kept off of mainstream social platforms.

ADVERTISEMENT
ADVERTISEMENT
More From Gear
Gear The Most Valuable Lego Sets & Minifigures Ever Released
Gear How to Set Up YouTube Parental Controls
Gear The Non-Alcoholic Spirit Boom Is Here. These 7 Bottles Are Worth a Try
Gear The Best Sleep-Training Clocks to Teach Your Toddler to Stay in Bed
Gear What to Do If You Accidentally Run a Disposable Diaper Through the Washing Machine
Gear The Most Expensive Hot Wheels Cars and Trucks Ever Made