Author Brad Meltzer explains the urgency and importance of his 'Ordinary People Change the World' series for grade-schoolers.

Brad Meltzer is an author of nearly every kind of book you can imagine. If you’re addicted to page-turning thrillers, you’ve probably read one — or several — of Meltzer’s nail-biting novels while sitting on an airplane or late at night after everyone is asleep. But, more recently, Meltzer has turned is excellent writing skill towards picture books in a series aimed at grade-schoolers called Ordinary People Change the World.

As the title suggests, each installment in the series is about a real person, and this week, two new installments in the series have just been published; I Am Walt Disney and I Am Marie Curie. A father himself, Meltzer believes passionately in the series and the transformative power of telling our children real stories about real people. Fatherly caught-up with Meltzer ahead of the publication of these two books to get an idea of how you make historical figures exciting for young children, and the urgent need to give children fantasies that aren’t just about dragons and magic.

Walt Disney was not a perfect guy. How do you write a biography for kids about him knowing some of his flaws?

It was very important to me to make sure he lives up to the hype. I reached out to independent biographers and asked them to walk me through his entire life because I want to make sure I know he can pass a level that makes me want to my kids to read about this. I’m thrilled to say he did. I mean, nobody’s perfect, but I think what came through as I wrote this book was that Disney was a dreamer. And my youngest son is someone who is a daydreamer so that connected with me. Also, if you find out someone had a perfect life, then it’s not an interesting story.

A detail from ‘I Am Walt Disney’ (Credit: Dial Books)

What is the inspiration behind this series of books? Why non-fiction for kids?

I started the series so my kids would have better heroes to look up to. I was tired of looking at people who are famous for being famous and huge athletes. One of the things that we purposely did it at the end of every Ordinary People Change the World book is to put a real picture of the real person. We did an I Am Rosa Parks book; I had a friend of mine who has a mixed-race family, and they told me as they were reading, they got to the last page and his daughter saw the actual photo of Rosa Parks and said: “Wait, this really happened?” And then suddenly he’s having an actual conversation about race. The message that’s built into the books as that all things are possible. This is real. This isn’t the story about a dragon or something or purple flowers that give you magic powers. These amazing things came from real people just like you.

Okay, so Disney is obviously a huge part of children’s imaginations, why is it important that kids know Disney was a person and not just a brand?

What you see when you read the books is that we’re actually trying to show that the best fantasy land is the one with the lower case “f”; the fantasy that’s in all of our heads. And, not everything can be a cartoon version of fantasy land. You can’t talk about someone like Marie Curie if you’re doing cartoon muscles. It’s a dark time, right? It’s hard to find heroes for our kids. I think that we have to remind our kids we all need the magic in our lives right now, but we don’t have to go back to stories about magic to find heroes.

A detail from ‘I Am Marie Curie’ (Credit: Dial Books)

Tell me a little more about the Marie Curie book. Disney is easier for kids to relate to, but doing Marie Curie seems much harder!

The Marie Curie of our story is a little girl who keeps breaking into her father’s cabinet that has all the physics apparatus in there. I think the goal of making these books for kids is not to show them the math or the best way to do physics. The only thing that matters is finding what is the other thing that everybody has in common with this person. That’s why there’s a whole double-page spread dedicated to Marie Curie when she’s younger and it says she loves to read, she loves to draw and she loves to dance!

You can pick-up I am Walt Disney and I am Marie Curie at bookstores right now.

This interview has been condensed for brevity and clarity. 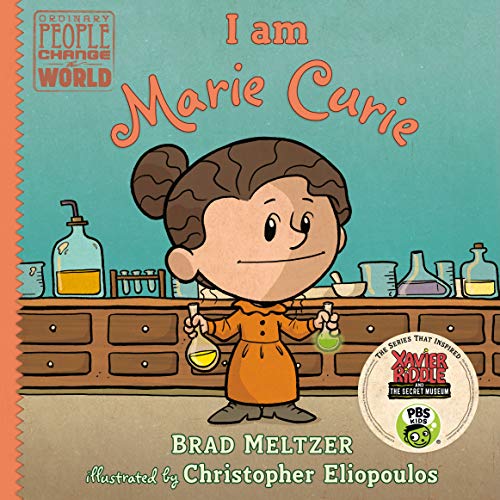 I am Marie Curie (Ordinary People Change the World)

Disney
ADVERTISEMENT
ADVERTISEMENT
More From Play
Play What Is the Best Order to Watch the ‘Star Wars’ Movies on Disney+?
Play Peter Pan Is the Boy Who Never Stopped Being Racist
Play Watch This Adorable Dog Story About Cruella’s Very Good Boy, Buddy
Play The Dark Reality of the ‘Toy Story’ Universe
Play A Parent’s Guide to Marvel’s ‘What If?’ — Should You Watch With the Kids?
Play All the Best Streaming Services For Families: Disney+ Vs Netflix Vs. Amazon: