Brian Floca, the author and illustrator of the kids' picture book 'Moonshot' reveals why kids love the moon, but also why some grade schoolers were confused about history.

This weekend, parents around the world will (hopefully) be telling their kids about that one small step for humankind taken on the surface of the moon exactly five decades ago. On July 20, 1969, astronauts Buzz Aldrin and Neil Armstrong became the first two human beings ever to walk in the soil of a place that’s not the planet Earth. But the ingenuity required to get them to that space sandbox took the combined efforts of thousands of scientists and engineers, all working together to achieve a nearly impossible dream. If you’re looking for something to make your kids proud of American history, the Apollo 11 moon landing is a good place to start. But, for some kids, this chapter of history might scan as so fantastic as to seem unreal today. Do kids today believe the moon landing was fake?

The answer is complicated, and to dive deeper into the subject of how kids connect with the historic moon landing, Fatherly caught up with author and illustrator Brian Floca. In 2009, Floca’s beautiful and award-winning picture book Moonshot became the definitive gateway to introducing grade-schoolers to the wonder and beauty of space travel history. Now, 10 years later, for the 50th anniversary, Moonshot is out in a brand-new edition with a little bit of new material.

Ahead of the historic anniversary, Floca sat down with me to chat about how the book came to be, why kids love the moon, and that one time at least one kid accused him of making the whole thing up.

What do you think the moon landing means for kids today?

It’s hard to boil it down to just one thing! There’s the grand spectacle, the great machines, the fire, the smoke, the noise, the speed! There’s the bravery of the astronauts, and the industriousness and genius of the builders and planners—making the story of Apollo a story of individual heroism and of teamwork, both, each made possible by the other. It’s a story of leaving home, and returning, changed—a story of that consciousness-altering view of the Earth floating in space. All those strands are there in Apollo, woven together, each adding strength to the other.

How is that different from what it means for their parents?

It’s an interesting question and you know, I’m not so sure it is very different. Put all those elements together and I think you end up with a sense of wonder and awe that has the power to move us no matter our age.

You told me once that some kids in schools thought that you had invented the moon landing, and named the various spacecraft, etc. Why do you think that is? Does that still happen?

Yes! During the question and answer session that followed one school reading I had a student ask how I’d decided to name the space ships Columbia and Eagle! I don’t mean to tell that story at the expense of the student; none of us know everything, least of all when we’re eight. But I was struck by the idea that there’s something in the idea of flying to the moon that would make a student think this was a story an author would want to make up—and of course, authors have indeed been making up stories of going to the moon since long before it was possible, and so for me that elemental aspect of the story of going to the moon was revealed by the question.

Related, more direct question: In your experience, do you think kids believe the moon landing happened? How pervasive was that conspiracy theory stuff?

I have happily not run into much of that while talking to young readers. Maybe the hunger for conspiracy kicks in a little later. The teenage years?

Why is it important to teach kids about historical events with picture books like Moonshot? I love the illustrations and I think I know why this format is ideal for a certain-aged kid, but why do you think it works? What can a storybook communicate to a child that a documentary can’t?

I think whether a book or a documentary works better for a kid will depend on book, documentary, and kid, all! But maybe a picture book, more than a documentary, or most documentaries, can try to reach its audience through story, through poetry, through trying to make a reader want to know more about a subject, rather than trying to make a reader feel he or she has been told everything about a subject, and there’s a certain power there.

I know it’s been a bit since you wrote and illustrated Moonshot, but what was the hardest part about it?

The book required a lot of research, and then a lot of discipline in thinking about the best way to use that research. From start to finish it was a sort of running attempt at balancing what needed to be known, shown, and explained, and what could and should be left out because it wouldn’t interest readers or wouldn’t work on behalf of the overall book. There’s that classic line you sometimes see attributed to Orwell about the need to edit ruthlessly while writing: “Murder your darlings.” And when you love your subject matter, you do end up with a lot of darlings! But knowing which ones to keep and which ones to let go is the difference between writing a list and writing a book, and you have to keep reminding yourself very few people want to read a list.

The 50th Anniversary of the Apollo 11 Moon Landing is this Saturday, July 20, 2019. You can grab Brian Floca’s Moonshot — perfect for grade-schoolers or toddlers who love beautiful illustrations of spaceships — right here. 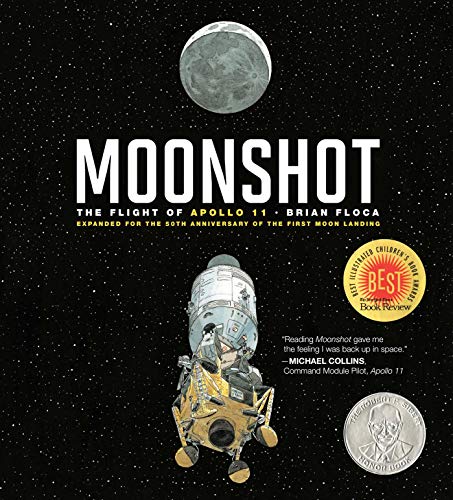