Marie Kondo Has a Kids’ Book, But Will It Spark Joy?

The trendiest minimalist on the planet has a forthcoming picture book about friendship aimed at children.

The biggest craze on the planet in 2019 is almost certainly connected to Marie Kondo’s KonMari method of cleaning up the clutter in your house or perhaps, in your life in general. The author of several self-help books and the host of the Netflix show Tidying Up With Marie Kondo, the reigning pop-authority on decluttering has now authored a children’s picture book, called KIKI & JAX: The Life-Changing Magic of Friendship. The book will be published on November 5, 2019, from Random House Kids.

Random House is also fairly confident the book will do well, too, since it will get an initial print-run of 250,000 copies. Though relative to the millions of books Kondo’s other books have sold, this print-run is relatively modest. Basically, you could read this as Kondo practicing what she preaches: if the people want more copies of KIKI & JAX beyond the initial 250K, so be it, but if not, then that’s fine, too.

Here’s what the story is about according to the Random House press release:

“KIKI & JAX tells the endearing story of two best friends who couldn’t be more different. Kiki is a collector, and Jax is a sorter. The one thing they always agree on is how much fun they have together. But when things start to get in the way, can they make room for what has always sparked joy—each other?” 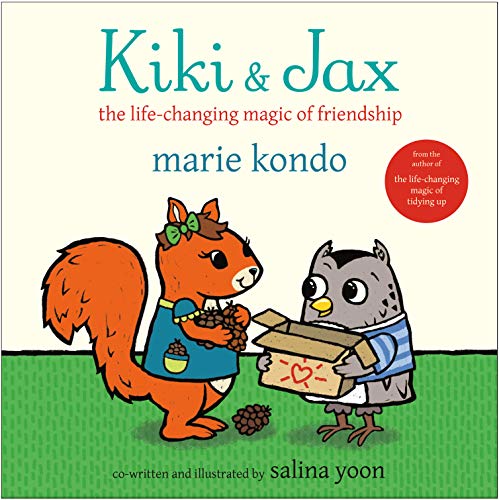 Basically, it sounds like a story of a hoarder and a non-hoarder trying to find some kind of moderation in their friendship, which, as kid’s books go, feels like a noble message.

The only tricky part now is this: Assuming you’re a big Kondo fan, what if your kid isn’t? If the Marie Kondo bok doesn’t inspire joy during your family’s reading time, will you get rid of it? Parents with bookworm kids know that sometimes even too many books can clutter up a living room or a bedroom, causing headaches and stubbed toes.

So, if you’re a huge Kondo fan, you can totally pre-order KIKI & JAX. But, the rest of us might wait and check it out at the library, first.