'The Tonight Show' host talks about working from home, writing his children's books, and why parents need to rethink their photo-taking habits.

Jimmy Fallon gets it. For months during the COVID-19 lockdown, he was the embodiment of every parent futilely attempting to work from home while dodging lawless, unruly children. His daughters Winnie, 7, and Franny, 5, interrupted his monologues, told him he wasn’t funny, used him as a human jungle gym, and in one particularly notable moment, giggled maniacally midway through Fallon’s earnest Tonight Show interview with Ethan Hawke about John Brown and the abolitionist movement. “I don’t have actor kids. They don’t do anything I ask them to do. They’re a tough crowd,” says Fallon, who’s now back in his studio at Rockefeller Center.

No, his kids aren’t stage-managed mini-adults. And yet simply being himself is the very thing that made him be so winningly relatable at a time when the whole notion of celebrity was in freefall, and the rich and famous were slammed for being almost dizzyingly tone-deaf and out of touch. You can’t buy authenticity. And Fallon, bemused, vulnerable, frazzled, and distracted in equal measure, shooting from random rooms in his house, was peak dad: He wore cardigans and polo shirts, the camera was operated by his wife, producer Nancy Juvonen, and the tricked-out graphics consisted of the name of a charity haltingly written out in crayon on paper by a small child. His first show, a March 17 10 minute clip featuring his retriever Gary, was a preview of things to come:

Fallon: “Franny, do you want to play the drums?”

Fallon: “Ok perfect. Can you draw me a drawing?”

None of this repartee was rehearsed. Nor was it an act. And that’s precisely why it hit with viewers, who prior to COVID had seen rare glimpses of Fallon’s daughters on social media. “They’re pretty normal kids. I considered hiring actor kids to play my kids,” says Fallon. “You can’t roll your eyes at me. At five years old? I’m the funniest person you know. You’re my only audience.”

Because shooting his show from his basement wasn’t enough work, Fallon also wrote a book, 5 More Sleeps ’til Christmas. It’s a sweet countdown to Fallon’s favorite holiday, and the follow-up to his other kids’ books, MAMA and DADA. The comedian and talk show host talks to Fatherly about family values and valuing his family.

You were the first late-night host to broadcast from home. And the thing is, you looked like we all felt: Overwhelmed, emotional, and a little fried, in the best sense. How do you look back on those days/weeks/months?

I have to give credit to my wife, to whom I give most of the credit for the things I do. She was like, ‘You gotta do something. Just put videos out.’ We’re going to spend too much together and you gotta get a hobby.

The thing I learned from Saturday Night Live is that you gotta show up. If you’re an entertainer, you gotta be there.  And that’s half the thing. Whether it’s good or bad, you showed up. I started making these things. I’d never worked with Nancy before but thank god she’s in the business and understands things. We never set out to do a project together. Things are going well and we don’t need to add that to our life. I don’t think either one of us thought we’d go longer than two weeks. Cut to: Now she wants to be in the director’s guild and is unionizing against me. She stepped up, man. I love working with her.

You met Nancy on SNL, began dating after she produced Fever Pitch, and got married in 2007. But you haven’t worked together since then, until the pandemic. How has your relationship shifted or changed?

We like each other. We chose right. It’s that thing of — we chose right. I actually really like you and we have a lot in common and you like me and this is fun and we’re having fun together. Under that pressure and in those circumstances, and no one is sure what’s going to happen, this is when you see if people show up. We made it work. It was creative and we were laughing.

It’s embarrassing having your wife see you do multiple takes and flub lines. I would do monologues and read jokes and she wouldn’t laugh. ‘You’re the only person in the audience! What are you doing?’ But she was right. You don’t want to hear one person cackling. Those months of shows — I haven’t watched them back but I have to because they’re almost like home movies.

And you spotlighted a charity, or two, on each show, which was cool as hell.

Everything we kept doing — let’s just not stop. The show kept getting longer and longer and we raised so much money. It’s so cool, man. It’s some of the longest days, but it happened — my kid lost three teeth during those. At one point, I was talking to Russell Wilson and Ciara. Winnie comes running in: ‘Dad, I lost a tooth!’ There’s blood on her face. Her hand is bloody, she’s holding a tooth, and it was genuine.

Before this, your girls made very rare appearances on your social media and that’s about it. You’ve shared a lot of your personal and family life with viewers since the pandemic. How do you know what’s ok to share and when to pull back?

I never like to be phony. I didn’t want to do it where every night you see this and it’s so cute. My kids didn’t really know what was going on (in terms of COVID-19). I don’t want to exploit them. You can tell when they’re bored and don’t want to do it. Winnie loves drawing, so she drew the logo. Franny is more the performer so she wants to steal the show and makes jokes and boo and not laugh at my jokes. She came out like that. 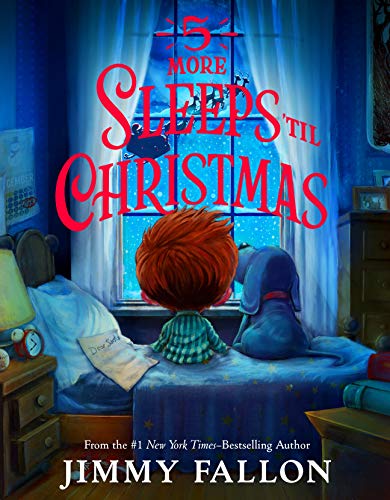 Fallon's kids' book is a sweet ode to Christmas. Fallon has partnered with the nonprofit First Book and his book publisher, Macmillan, to give one million books to needy kids this holiday season.

What’s been, to you, the biggest revelation about fatherhood?

It’s cliche to say you love them so much but you really do love them. My biggest revelation is how much I ended up caring for other’s people kids if that makes any sense. You get it more. When I didn’t have kids, if I heard a crying baby in the restaurant, I would think, ‘Can you stop the crying and go around the block?’ Now I would be like, ‘Just give me the baby — how can I help? I’ve been there.’ I was always kind of emotional — I think it’s my Irish-Catholic upbringing. Now, I’m like full-on — Hallmark is for me now. I’m ready for a good cry.

The other revelation of being a father is realizing your phone isn’t for sunsets and brunch. I don’t take pictures of my eggs Benedict anymore. I’m forcing myself to take as many photos with the second child as I did with the first child. We took the most useless photos of Winnie when she was growing up. Look, this is the first time she saw a wall! Look, she doesn’t like oatmeal!

You’ve now written multiple kids’ books. How did you instill a love of reading in your girls?

It started really young. I didn’t stop even though they didn’t understand what a book was. They’re reading to me now. I like to read and my wife likes to read. I’m always reading the paper. I always am reading and doing something, so I guess they learn from example. One of the weirdest things about doing these kids’ books — you feel like a teacher almost. It’s so rewarding. You get a buzz if you can teach a kid something. I put the DADA and MAMA books out kind of as a joke.

This is the most words for me in any book. This is my War and Peace. My Goldfinch. I love the holidays. I always get so excited about the holidays. I love holiday music. I was talking to Winnie a couple of years ago — she asked, ‘How many more sleeps until Christmas?’ I’d never heard “sleeps.” It makes it cute. I loved it. It’s about being anxious and not being able to fall asleep.

Your kids connected with viewers because they seem so precocious, without any of it ever being forced or fake. What’s your approach to raising functional, normal kids who appreciate what they have?

You have to work at it. Things don’t come this easy. We worked hard to even go on this vacation. We remind our kids all the time how lucky we are, in a good way. We don’t make them upset. ‘This is great you got to play on an iPad for half an hour. A lot of kids don’t even have an iPad.’ Nancy is probably better at it than I am. She’s honest and always having those conversations, almost like adult conversations. ‘We’re not considering getting that.’ If you want a new toy, we have to get rid of another toy and give it to someone who needs toys. The more you give the more you get. It’s on you.

You’re raising your kids and you have to put the time in. They hear everything. When I’m around them I want to set the best example I possibly can. If you’re good people they’ll be good people.

Jimmy Fallon
ADVERTISEMENT
ADVERTISEMENT
More From Play
Activities 10 Ways to Fight Boredom This Weekend: Games, Activities, and Experiences to Entertain
TV Rob Paulsen Explains Why 'The Animaniacs!' Are Back and Better Than Ever
Movies Watch an Exclusive Clip From Upcoming Sequel: 'The Croods: A New Age'
TV Chappelle's Show Is Off Netflix, But Streaming Elsewhere — Here's Why
TV Paul Bettany Says 'WandaVision' Isn't as Crazy as It Looks
TV Your Kids Need to Witness the Horror of the 1978 'Star Wars' Holiday Special